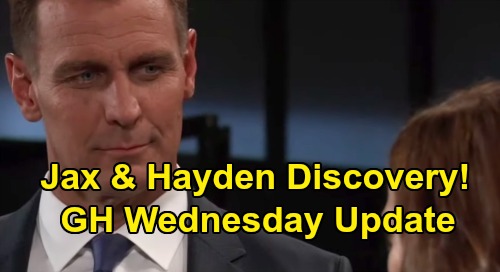 General Hospital (GH) spoilers update for Wednesday, July 31, tease that Hayden Barnes (Rebecca Budig) and Jasper “Jax” Jacks (Ingo Rademacher) will prepare for their big evening as the guests of Valentin Cassadine (James Patrick Stuart) and Nina Reeves (Cynthia Watros) at Wyndemere. They are excited about the prospect of getting to snoop around the castle, but what could they be looking for?

There’s been a lot of buzz about the possibility of Hayden and Jax working with a not-really-dead Nikolas Cassadine (last portrayed by Nick Stabile) to bring Valentin down. If that were the case, then perhaps they’ll be looking for something in Wyndemere that relates somehow to Nikolas. It could even be something that Valentin himself is unaware of! GH viewers will have to tune in to see what the duo ultimately does inside the castle.

Next, on the new episode of General Hospital on Wednesday, July 31, it looks like Drew Cain (Billy Miller) will get some bad news. As GH viewers know, Curtis Ashford (Donnell Turner) just discovered a break-in at Aurora in Drew’s office. It won’t take long for Drew to realize that the flash drive was taken. Of course, he wasn’t planning on using the flash drive to regain his memories, but he’ll still be irked that it’s gone.

Chances are, he’ll have a suspect in mind…Shiloh Archer (Coby Ryan McLaughlin). Of course, Shiloh was careful and had an “associate” carry out the theft, but it surely won’t escape Drew that Shiloh’s the most likely culprit. After all, Shiloh has spent too much time prying into Drew’s memories of his past, and Drew strongly suspects that there’s something in his past that Shiloh’s afraid of.

Interestingly, Wednesday’s GH previews show Drew having a talk with Shiloh at Aurora, so it seems that Shiloh will brazenly show up to the scene of the theft. it looks like they’ll have a tense conversation, as Drew warns Shiloh by telling him that all he has is time to find out what happened in Afghanistan. Perhaps that will be Drew’s new mission – to find out what happened in his past as it relates to Shiloh. It might be the best way to bring Shiloh down at this point.