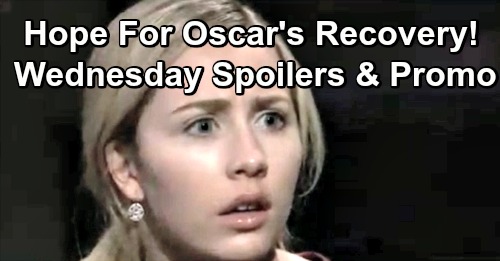 General Hospital (GH) spoilers for Wednesday, May 1, tease that a special episode is coming up. GH will really dive in and focus on the difficulties Oscar Nero’s (Garren Stitt) loved ones are facing. Naturally, we’ll also see how Oscar’s holding up. As his death draws near, it’ll bring some tough emotions all around.

For starters, Ned Quartermaine (Wally Kurth) will discover someone hiding out at the Quartermaine mansion. He’ll ask what this person’s doing in there and await a response. There’s a good chance Olivia Quartermaine (Lisa LoCicero) just needed to find a quiet room and reflect. She tends to cry easily anyway, so Oscar’s looming demise will certainly hit her hard.

Even thought Olivia doesn’t know Oscar very well, she hates that the Quartermaine family is losing a member – particularly one who’s so young. As Olivia thinks back to other losses she’s dealt with her in her lifetime, she’ll need Ned’s support.

Terry will admit that it’s hard to accept the grim reality of terminally ill patients. No matter what she does, the story ends the same way. Across town, Cameron Webber (William Lipton) will struggle to process his feelings. He may want to avoid Oscar as his final days approach, but Trina Robinson (Sydney Mikayla) will nudge Cam toward being a good friend and hope it pays off.

Other General Hospital spoilers say Drew Cain (Billy Miller) and Dr. Kim Nero (Tamara Braun) will have a deep conversation. As they discuss Oscar, Drew will suggest that maybe their son’s not fighting a losing battle. He may argue that Oscar fought for every moment he had with them, so that counts for something. Oscar will soon be free of pain and fear, which is another small victory here.

Julian Jerome (William deVry) will also get in touch with Kim on Wednesday, so she’ll be happy to know he’s in her corner. Meanwhile, Carly Corinthos (Laura Wright) will get a pep talk from Sonny Corinthos (Maurice Benard). They’ll both be worried about Josslyn Jacks (Eden McCoy), but there’s not much they can do now.

Sonny will urge Carly to help Joss survive and be an example of strength. The Corinthos family went excruciating ordeal after Morgan Corinthos’ (Bryan Craig) death, but they got through it and were able to cope. Sonny will undoubtedly assure Carly that Joss can get through this, too.

Back at the Quartermaine mansion, Josslyn won’t budge from Oscar’s side. She’ll look stunned when Oscar declares that he doesn’t understand it, but he’s feeling better. However, it’s not unusual for some dying patients to rally and feel a sudden burst of energy. It typically isn’t long until that feeling fades and the decline begins again.

Of course, it’s also possible this is Josslyn’s fantasy. General Hospital spoilers say Joss will cling to the last bit of hope on Wednesday. She might imagine what it’d be like if Oscar miraculously recovered. Unfortunately, that’s not what’s happening here. Oscar will indeed die, so GH fans need to be prepared for the emotional scenes ahead.