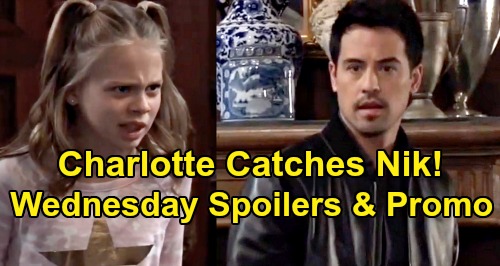 General Hospital (GH) spoilers for Wednesday, November 20, tease that some Port Charles shockers are in store. Before we get to those, just know that there’ll be more impeachment hearings coverage on Wednesday. It’s possible GH will be preempted, but the show will make an official announcement on that later. For now, let’s dive in and see what’s coming up in PC.

First, General Hospital spoilers say Harrison Chase (Josh Swickard) will scold his brother. He thought he had finally formed a nice bond with Hamilton Finn (Michael Easton), but he recently learned Finn kept a huge secret from him. Finn never said a word about having a daughter, so Chase will call his big bro out on Wednesday and wonder what his deal is.

Of course, Robert Scorpio (Tristan Rogers) suggested Chase should cut Finn some slack. Finn just found out about Violet Barnes (Jophielle Love) himself, so he needed a minute to wrap his head around the news. Perhaps Fill will explain that and hope Chase can understand why he didn’t fill him in ASAP.

Other General Hospital spoilers say Hayden Barnes (Rebecca Budig) will have an awkward chat with Anna Devane (Finola Hughes). At the Metro Court, Hayden will talk to Anna about her upcoming wedding to Finn. Wednesday’s preview video shows Hayden asking, “You’re still getting married, right?” Anna may suggest that they don’t have concrete wedding plans yet, but they indeed intend to tie the knot.

Over with Valentin Cassadine (James Patrick Stuart), he’ll pay Ava Jerome (Maura West) a visit at Shadybrook and declare that she has Helena Cassadine’s (Constance Towers) portrait. Valentin’s claim should catch Ava off guard so it sounds like she and Valentin have an interesting faceoff ahead.

Meanwhile, Jasper “Jax” Jacks (Ingo Rademacher) will insist he won’t be attending Nina Reeves’ (Cynthia Watros) upcoming wedding. Nina and Valentin’s last nuptials were a bust thanks to all the Sasha Gilmore (Sofia Mattsson) mayhem. They’re ready to give things another try, but Jax will make it clear he has no interest in watching Nina make a mistake. He’ll confront Nina about why she’s giving Valentin yet another chance, so will Nina admit the truth?

It’s easy to see that Nina’s playing Valentin. Nina will open up to Jax on Wednesday, so she may choose to fill him in on her sneaky plan. However, Nina appeared to be emotionally affected by Charlotte Cassadine’s (Scarlett Fernandez) kidnapping crisis. Valentin’s soft, fatherly side always manages to tug at Nina’s heartstrings, so her resolve may continue to weaken.

At Wyndemere, Charlotte will have a run-in with Nikolas Cassadine (Marcus Coloma) – but she won’t realize who she’s staring at. Charlotte will simply recognize Nikolas as the mystery man from the pier. She’ll get agitated and wonder what he’s doing in her living room, but Nikolas will undoubtedly find a way to wiggle out of trouble. Even so, it’s obvious Nik needs to stop taking so many outrageous risks.

Next, Jason Morgan (Steve Burton) will work himself into a frenzy as he updates Carly Corinthos (Laura Wright). Since Sam McCall (Kelly Monaco) was just sentenced to two years, Jason’s got some regrets. He’ll shout that he should’ve killed Shiloh Archer (Coby Ryan McLaughlin) from the start, but Carly will want Jason to calm down and focus. It won’t be long until Jason calls Damian Spinelli (Bradford Anderson) and works on plotting his next move.

Finally, Brook Lynn Ashton (Amanda Setton) will make some waves with her return. She’ll get a smile from Sonny Corinthos (Maurice Benard) when she asks if he’s still driving the ladies wild, but Ned Quartermaine (Wally Kurth) will have questions. He’ll wonder what’s brought his daughter back to town, but Brook Lynn should stay tight-lipped for now.