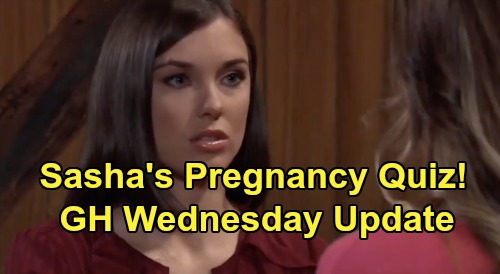 Martin returned for his tablet a few minutes later and ultimately played the recording for Valentin. Since Valentin is now in the loop on the codicil hunt, he knows how much is at stake. Martin will point out how much Valentin stands to lose here, but Valentin won’t think that’s going to happen. He’ll insist he has no intention of losing anything at all.

Of course, overconfidence could be Valentin’s downfall if he’s not careful! As for Hayden Barnes (Rebecca Budig), she’ll be anything but confident across town. Hayden will escape the tight spot she’s landed in – most likely with a little help from Nikolas Cassadine (Marcus Coloma). However, Nikolas will think this near abduction proves his point. Valentin is dangerous, so Nik will warn Hayden to leave Port Charles immediately.

Hayden will determine that Nikolas is right, so she’ll make plans to do this alone. Leaving Violet Barnes (Jophielle Love) won’t be an easy decision – and it’ll be even harder to go through with. Nevertheless, Hayden will feel like Violet will be better off sticking with Hamilton Finn (Michael Easton). She’ll trust that Violet’s dad will take good care of her while she goes underground.

Meanwhile, Finn won’t have a clue about all the drama that’s erupting. He’ll be too busy admiring his adorable daughter and tickling Anna Devane (Finola Hughes) pink in the process. She’ll be pleased to see how much bliss fatherhood as brought Finn.

Other General Hospital spoilers say Alexis Davis (Nancy Lee Grahn) will feel like she got suckered. At GH, she’ll rant about rolling out the carpet for someone who wanted her dead. Neil Byrne (Joe Flanigan) won’t think any of this is Alexis’ fault, but he’ll hope the test results prove his theory. He’s convinced Kendra Lennon (Michelle Argyris) poisoned Alexis, so he’s counting on that pill to back him up.

To Alexis and Neil’s surprise, the pill will indeed be a holistic anxiety supplement. The primary ingredient will be gingko biloba, so Neil won’t understand why the puzzle pieces added up to nothing. Neither one of them will realize the powdered drink supplement was Kendra’s weapon of choice. She gave Alexis a normal batch to dupe her into guzzling the tainted version.

Alexis may figure out that part of the story eventually, but she’ll just know something’s not right for now. Evidence, schmevidence! Sometimes you just have to go with your gut. Alexis will do some digging in the coming episodes, but that decision will prove to be a dangerous one.

Over with Brad Cooper (Parry Shen), he’ll once again be on the hot seat. Lucas Jones (Ryan Carnes) will urge Brad to come clean about what he’s hiding. He won’t get why this is so hard if Brad really wants their marriage to work. Sadly, confessing the baby swap would blow the “Brucas” family to bits. There’s no way Brad can tell Lucas the truth about switching kids with Nelle Benson (Chloe Lanier).

Speaking of kids, could Willow Tait (Katelyn MacMullen) have one on the way? It looks like Sasha Gilmore (Sofia Mattsson) will think it’s a possibility. She’ll bump into Willow and pick up on some intriguing hints. Sasha will acknowledge that this is none of her business, but she’ll decide to ask Willow a question anyway. Before Sasha can finish, Willow will shut her down nervously. It appears she’ll want to deal with this potential pregnancy on her own for now.