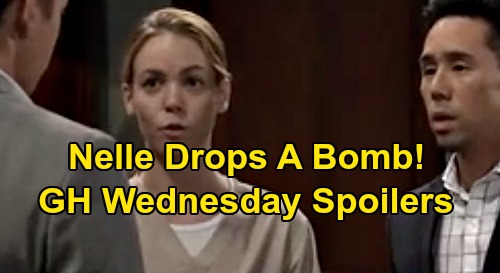 General Hospital (GH) spoilers for Wednesday, October 16, tease that Nelle Benson’s (Chloe Lanier) parole hearing will get underway. Brad Cooper (Parry Shen) will be in attendance, but he certainly won’t hope Nelle’s released. He wrote a statement of support like Nelle asked, but he’ll secretly hope the judge denies her parole and sends his worst nightmare back to Pentonville.

Michael Corinthos (Chad Duell) will also be on hand at this hearing, and he won’t be happy about Brad vouching for the criminal. Nelle’s trying to get off the hook by using the excuse that her hormones were out of whack. Brad’s backing her up, so Michael will be hopping mad. He’ll wonder why Brad would defend Nelle, so she’ll argue that it’s time for Michael to know the truth.

Of course, this is undoubtedly another fake-out. Surrounding General Hospital spoilers don’t point to any “Wiley Cooper-Jones” (Theo and Erik Olson) drama just yet, so Nelle may insist the hormonal change excuse is the truth. She might lie that Brad saw the difference in her and is being honest for his friend’s sake.

General Hospital spoilers say Michael will end up physically attacking Brad, so some tense scenes are on the way. In the meantime, Lucas Jones (Ryan Carnes) will struggle to understand Brad. Between this Nelle support and all the nervousness Brad’s battled, Lucas just won’t know what’s going on inside that head of his. He’ll vent to Julian Jerome (William deVry) as he frets about the situation on Wednesday.

Over with Alexis Davis (Nancy Lee Grahn), she’ll seem rattled when a woman enters Charlie’s Pub. If it’s Kendra Lennon (Michelle Argyris), Alexis may dread enduring more harsh treatment from her personal trainer. GH fans know Kendra’s up to no good, but so far Alexis just sees her as someone who’s whipping her into shape.

Of course, Alexis may also spot Hayden Barnes (Rebecca Budig) and suddenly be uncomfortable. Hamilton Finn (Michael Easton) can’t be sure of anything, but he’s starting to wonder if Hayden never miscarried. He revealed his suspicions to Alexis, so her interactions with Hayden could be awkward from now on.

Other General Hospital spoilers say Valentin Cassadine (James Patrick Stuart) will put out another fire. Nina Reeves (Cynthia Watros) will be perplexed when Valentin wants to let Sasha Gilmore (Sofia Mattsson) off easy. She won’t get why Valentin wouldn’t want to see Sasha punished. Nina believes Sasha lied to Valentin as well, so none of this will make sense to her.

Since Valentin was behind the whole thing, he realizes Sasha’s taking the fall. Valentin will want to repay the favor by minimizing the damage for her, too. He’ll do his best to plead Sasha’s case without drawing attention to his own lies. It’ll be tricky, but Nina’s apparently so gullible that it won’t matter!

Finally, Lulu Spencer (Emme Rylan) will spar with Maxie Jones (Kirsten Storms). After Maxie implies that she wouldn’t have told Nina the truth, Lulu will be appalled. Maxie tried to spill the truth herself before another fake DNA test proved her wrong, so it’s a bit hypocritical to blame Lulu here. It seems like Lulu’s getting too much flak for stepping up and doing what was right.

Lulu will defend her actions in Wednesday’s episode, so it’ll be interesting to see what else Maxie has to say. We’ll give you updates as other GH news comes in. Stay tuned to the ABC soap and don’t forget to check CDL often for the latest General Hospital spoilers, updates and news.