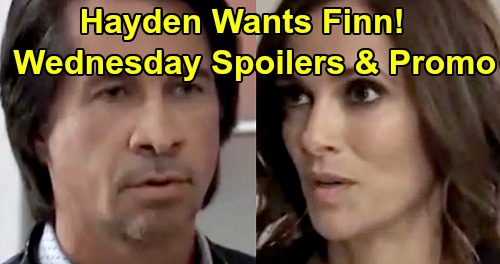 General Hospital (GH) spoilers for Wednesday, October 30, tease that Josslyn Jacks (Eden McCoy) will be distraught over a missing item. She’ll tell Jason Morgan (Steve Burton) and Carly Corinthos (Laura Wright) that she thinks she lost something, so they’ll undoubtedly try to help. Joss might’ve misplaced the necklace Jasper “Jax” Jacks (Ingo Rademacher) passed along for Donna Corinthos. Then again, this might be some memento Joss saved from Oscar Nero Quartermaine (Garren Stitt).

Whatever the case, Jason and Carly will do their best to help Josslyn through her crisis. Meanwhile, Molly Lansing-Davis (Haley Pullos) will deal with a crisis of her own. She’ll be dressed up for Halloween when she finds Alexis Davis (Nancy Lee Grahn) out like a light. Molly will shout for Alexis to wake up, and her mom will eventually open her eyes. However, it should be clear to Molly that Alexis is out of it.

Alexis will think this must be the flu, but GH fans know Kendra Lennon (Michelle Argyris) is to blame for her weakening condition. Thanks to the tainted supplement, Alexis will get worse before she gets better! Over with Trina Robinson (Sydney Mikayla), she’ll push Cameron Webber (William Lipton) to have some Halloween fun with her. Perhaps Cam will consider bailing on the dance due to recent events. However, Trina will make a convincing pitch, so Cam will decide he’s in.

While the teen scene has a party on The Haunted Star, the town’s main bash will kick off at the Metro Court. General Hospital spoilers say there’ll be plenty of tricks, treats and creative costumes. Naturally, there’ll be plenty of drama as well! TJ Ashford (Tajh Bellow) will approach Jordan Ashford (Briana Nicole Henry) and insist he has something important to ask her. Curtis Ashford (Donnell Turner) will also be on hand for this intense conversation.

Will TJ have more concerns about Stella Henry (Vernee Watson) or could this be about something else? Either way, this won’t be Wednesday’s only troubling encounter. Valentin Cassadine (James Patrick Stuart) will also confront Jax and Laura Webber (Genie Francis) about their obsession with Helena Cassadine’s (Constance Towers) portrait. His suspicions will definitely set off some alarm bells.

As for Nina Reeves (Cynthia Watros), she’ll lash out at Sasha Gilmore (Sofia Mattsson). Nina will rant about how she’s holding Sasha personally responsible, but Michael Corinthos (Chad Duell) will be there to intervene. Unfortunately, it looks like Michael may get snappy with Sasha, too. Lies can take a toll on a relationship – even well-meaning ones!

Over with Ava Jerome (Maura West), she’ll be on edge as usual. Ava will bump into someone, but another guest will become more concerning later. General Hospital spoilers say Ava will be followed by a masked man, so this is building to a Halloween showdown on the GH episode Thursday, October 31. There’s a good chance Nikolas Cassadine (last played by Nick Stabile) is behind that mask, so stay tuned to watch it all play out.

Finally, Hayden Barnes (Rebecca Budig) will speak with Hamilton Finn (Michael Easton) about their daughter. She’ll wonder if Finn’s going to be part of Violet Finn’s (Jophielle Love) life, so let’s hope his answer is “Of course.” Finn would’ve been there from day one if Hayden hadn’t deceived him.