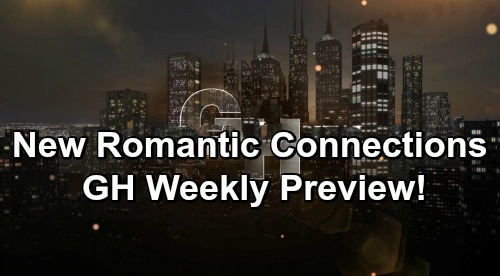 General Hospital (GH) spoilers preview for the week of April 15-19 tease that the drama’s about to heat up in Port Charles. For starters, Franco Baldwin (Roger Howarth) will clash with Cameron Webber (William Lipton). After Cam gets into a fight at school, he’ll admit it was because of a homophobic slur someone used to describe Aiden Webber (Jason David).

That’ll lead to a conversation about Aiden’s potential sexuality and a reaction that Franco disagrees with. Cam won’t respond how Franco wants, so he’ll get an earful from his stepdad. Elizabeth Webber (Rebecca Herbst) won’t exactly approve either, but Cam won’t be mean-spirited about any of this. He’ll probably just be worried about his brother and that harsh treatment Aiden may continue to face.

Still, Liz and Franco will want Cameron to give Aiden support when the time comes. Over with Michael Corinthos (Chad Duell), things will finally start adding up. It looks like he’ll figure out that Willow Tait (Katelyn MacMullen) gave up Shiloh Archer’s (Coby Ryan McLaughlin) baby up for adoption. Michael certainly won’t judge Willow for making that choice or hiding the truth.

Instead, Michael will show sympathy and once again push Willow to help Kristina Corinthos-Davis (Lexi Ainsworth). GH fans know it’s important to break the cycle of Shiloh’s manipulation. Meanwhile, Alexis Davis (Nancy Lee Grahn) will learn some concerning news. She’ll realize Julian Jerome (William deVry) handed over the money for Kristina’s initiation into “The Trust,” so she’s not going to be happy.

Other General Hospital spoilers say Jason Morgan (Steve Burton) will get some terrible updates as well. He’ll realize Brad Cooper (Parry Shen) is drifting into Dawn of Day, which will be a problem since the infamous cup will end up in his hands. Elsewhere, Olivia Quartermaine (Lisa LoCicero) will prepare the Quartermaine mansion for Oscar Nero (Garren Stitt). He’ll be going there to live out his final weeks.

Next, Carly Corinthos (Laura Wright) will be deeply moved. She’ll be driven to tears by something touching, so this could involve learning her baby’s gender or perhaps a tender moment between Oscar and Josslyn Jacks (Eden McCoy). Either way, Carly will turn on the waterworks and focus on the good in the world.

Across town, General Hospital spoilers say Sasha Gilmore (Sofia Mattsson) will go against her instincts. She doesn’t think it’s the best idea to get too close to Michael, but she’ll end up doing it anyway. Carly will meddle a bit later when she exchanges introductions with Sasha and sizes her up.

It sounds like an action-packed week’s ahead in PC. We’ll keep you posted as other GH details emerge. Stay tuned to the ABC soap and don’t forget to check CDL often for the latest General Hospital spoilers, updates and news.