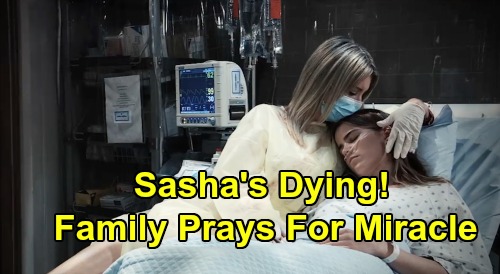 General Hospital (GH) spoilers preview tease that while the test results may be in concerning Sasha Gilmore’s (Sofia Mattsson) illness, it won’t mean a quick cure is in order. The new GH promo for the week of August 26 is about a family’s devastation over Sasha’s diagnosis, as well as the struggle to save her from the grips of her deadly virus. As GH spoilers indicate, Sasha will be diagnosed with a rare strain of the avian flu – something that humans rarely contract but that can be deadly.

Of course, GH viewers know that Sasha got the virus from Cassandra Pierce (Jessica Tuck), who dosed Sasha’s breakfast with the virus after she befriended Sasha and Michael Corinthos (Chad Duell) in Puerto Rico. Clearly, Cassandra is out for revenge against Nina Reeves (Cynthia Watros), and she’s chosen to go after the person Nina loves the most in the world.

Well, according to GH spoilers, Hamilton Finn (Michael Easton) will know upon seeing Sasha’s diagnosis that she’s in bad shape. The promo shows Sasha asking Finn about the chances that she’ll survive her illness, and Finn’s answer won’t bode well. He’ll tell the ailing Sasha that they’re dealing in unchartered territory, since the virus appears to be a rare strain of the avian flu.

That will leave Nina, Valentin Cassadine (James Patrick Stuart), and Michael quite worried about Sasha. Nina is shown in the preview in tears telling Jasper “Jax” Jacks (Ingo Rademacher) that Sasha could be dying, and Valentin is shown telling Liesl Obrecht (Kathleen Gati) that Nina would be inconsolable if Sasha were to die.

Of course, for Valentin, there are great risks associated with Sasha being near death. As GH viewers know, he and Sasha have been keeping a huge secret from Nina…that Sasha’s not really Nina biological daughter. Valentin is probably worried about Sasha coming clean to Nina on her death bed, which could very well happen if Sasha truly believes she’s going to die. Sasha may not want Nina’s dream of being a mom to end with her death, since Nina’s still got a daughter out there somewhere.

And then there’s Obrecht, who also is aware that Sasha isn’t really Nina’s daughter. She might start feeling like now is the time to come clean with Nina about Valentin and Sasha’s scam, so Valentin might have to work hard to keep a lid on both Sasha and Obrecht.

Of course, it probably will remain in the back of Valentin’s mind that if Sasha were to die, then his big secret would be dead and buried along with her, Obrecht notwithstanding. Valentin might be thinking that a dead Sasha would solve a lot of his problems, but then again, he’ll want her to survive out of love for Nina. At any rate, he’s going to have some mixed feelings about this whole situation.

Expect to see a lot of angst and worry over Sasha this week, as well as a big reveal about where Sasha’s avian flu came from. According to GH spoilers, Nina will soon receive a text, as it looks like Cassandra will send the photo of herself, Michael, and Sasha in Puerto Rico. While that will solve the mystery of where Sasha got her illness, it won’t help cure her. Could Cassandra possibly dangle a cure in front of Nina for a cost? GH viewers will have to tune in to see!

Do you think that Sasha is going to survive her illness? Stay tuned to the ABC soap and don’t forget to check CDL often for the latest General Hospital spoilers, updates, and news.