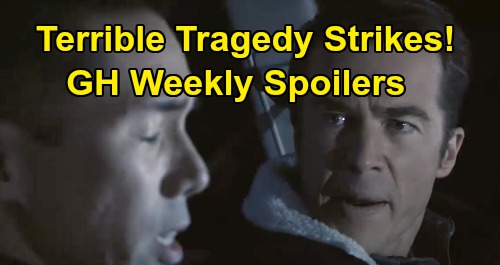 General Hospital (GH) spoilers for the week of December 2-6 tease that some hot drama’s coming up. Several Port Charles residents will find themselves in dangerous predicaments, including Alexis Davis (Nancy Lee Grahn). After figuring out Kendra Lennon’s (Michelle Argyris) secret link to Kiefer Bauer (Christian Alexander), Alexis problems will get even worse. She’ll face Kendra’s attack, but her troubles won’t end there.

GH buzz points to Alexis’ storyline colliding with Brad Cooper’s (Parry Shen) – perhaps in the form of a tragic car accident. It appears Julian Jerome’s (William deVry) decision to tamper with Brad’s car could have consequences he never intended. Based on General Hospital’s weekly preview video, Lucas Jones (Ryan Carnes) will apparently end up behind the wheel of Brad’s car as they bicker over his secrets.

Will Alexis be unconscious from Kendra’s attack and somehow land in the path of the tampered vehicle? That seems like a good option based on the available clues. Whatever happens, things aren’t looking good for Alexis. The week of December 2-6 will leave Kristina Corinthos-Davis (Lexi Ainsworth) deeply distraught. She’ll lean on Sonny Corinthos (Maurice Benard), who’ll give his daughter reassurance.

Sonny will undoubtedly insist that Alexis is a fighter and will pull through this. Of course, there’s also the matter of how this accident will turn out for Brad and Lucas. Will one or both be injured in the crash? General Hospital spoilers say Julian will be devastated by the outcome of all this. He’ll should be horrified when he realizes he’s put Alexis and Lucas’ lives on the line.

Bobbie Spencer (Jacklyn Zeman) will have some awful news to pass along soon after the accident. Carly Corinthos (Laura Wright) will also bring her plans to an abrupt end so she can be at GH. Michael Corinthos (Chad Duell) will want to pitch in however he can, but it may be a bit of a waiting game. Everyone will just have to hope all parties involved can pull through this tragic ordeal.

As for Jordan Ashford (Briana Nicole Henry), she’ll be perplexed about this accident and the cause of it. Jordan will do some investigating, but her findings won’t be conclusive – at least not yet. Julian will be busy battling terrible guilt, but he may also be scrambling not to get caught. This could be a tough decision to come back from.

Sonny will also have to deal with more Mike Corbin (Max Gail) drama, so the Corinthos family will have plenty on their plates. Josslyn Jacks (Eden McCoy) will also deliver a reminder in the week ahead. She’ll probably remind Trina Robinson (Sydney Mikayla) and Cameron Webber (William Lipton) how important it is for them to keep Dev Cerci’s (Ashton Arbab) secret.

Over with “Drew Cain” aka Franco Baldwin (Roger Howarth), his memory reversal procedure will be completed. Elizabeth Baldwin (Rebecca Herbst) will finally find out if her beloved husband has come back to her. Elsewhere, Willow Tait (Katelyn MacMullen) will be eager to learn if she’s truly pregnant. She’ll likely take a pregnancy test before she ends up confiding in Sasha Gilmore (Sofia Mattsson) again.

Next, Valentin Cassadine (James Patrick Stuart) will have a heated confrontation with Jasper “Jax” Jacks (Ingo Rademacher) while Nina Reeves (Cynthia Watros) gets a shock. Will Nina be surprised by Jax’s fury being unleashed on Valentin? Could this be about Charlotte Cassadine’s (Scarlett Fernandez) new knowledge instead?

Charlotte knows she’s got a “secret bodyguard,” and his picture happens to be in Lulu Spencer’s (Emme Rylan) phone. She may figure out that it’s Nikolas Cassadine (Marcus Coloma) or at least put Nina on the path to the truth.