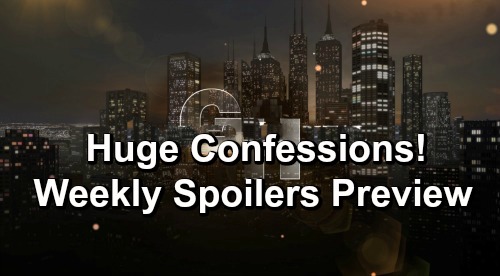 General Hospital (GH) spoilers for the week of February 25-March 1 tease that some shockers are on the way. Jordan Ashford (Briana Nicole Henry) will be in a fight for her life after being mowed down by Drew Cain’s (Billy Miller) car. His sudden blindness will cause a world of drama since Jordan’s got a big secret.

Jordan’s the only one who knows the real reason why Franco Baldwin (Roger Howarth) admitted to the murders. Of course, Curtis Ashford (Donnell Turner) knows Jordan was planning something unorthodox, so he should realize what’s up eventually. That could help Franco later, but Curtis will be tied up at GH for a while. He’ll just hope Jordan can survive her difficult ordeal.

Nina Reeves (Michelle Stafford) will stop by to show her support, so that should mean a lot to Curtis. He’ll definitely appreciate Nina’s friendship as he awaits news on Jordan’s condition. Meanwhile, Elizabeth Webber (Rebecca Herbst) will fret over Drew’s situation. She’ll hope the surgery restores his sight like it did for the others.

Jason Morgan (Steve Burton) will need the same surgery and some other medical treatment as well. After falling down a flight of stairs following his blindness bombshell, Jason’s plan with Sam McCall (Kelly Monaco) will be in jeopardy. Shiloh Archer (Coby Ryan McLaughlin) will inevitably realize that Sam and Jason are too close for comfort.

However, Jason’s always got time for Carly Corinthos (Laura Wright)! She’ll open up to Jason this week, so that could mean she’ll spill the baby secret. Carly’s trying to keep that quiet for now, but this is her bestie we’re talking about. She won’t be able to keep this from him for very long.

Other General Hospital spoilers say Maxie Jones (Kirsten Storms) will assist Lulu Falconeri (Emme Rylan). Will this have something to do with Franco? Lulu will get ready to face Franco this week, so maybe Maxie will help with preparations. She could even help Lulu try to remember more about the attack.

Over with Alexis Davis (Nancy Lee Grahn), she’ll sit down for another therapy session with Dr. Neil Byrne (Joe Flanigan). GH fans know this whole idea makes Alexis uncomfortable, but she genuinely gets something out of it. That’s why she’s willing to endure the awkwardness and try to make progress in her life.

Next, Mac Scorpio (John J. York) and Felicia Scorpio (Kristina Wagner) will come up with a theory. Will they realize Laura Webber (Genie Francis) is missing and have an idea about where she is? It’s doubtful they’ll guess she’s in Ferncliff’s basement, but figuring out she’s gone would be a nice start.

Then again, Felicia and Max’s theory could involve Franco taking credit for the killings. They might catch on and determine that Franco’s trying to flush the real murderer out. It looks like Franco will keep up his efforts, even while Jordan’s incapacitated. He may feel like he really has no choice.

That’ll leave Ryan Chamberlain (Jon Lindstrom) furious once Franco gives an interview. He’ll talk to Lulu about what happened, but his version of events will obviously be made up. Lulu may discover what’s going on soon and do her best to pitch in.

Back with Drew, he’ll get a message that’s rather cryptic. General Hospital spoilers say all the secrecy surrounding it will leave him puzzled. Curtis will also manage to get his hands on a crucial voicemail. Perhaps he’ll have proof of Jordan’s plot in the near future.

It sounds like some gripping episodes are coming up. We’ll give you updates as other GH details emerge. Stay tuned the ABC soap and don’t forget to check CDL often for the latest General Hospital spoilers, updates and news.