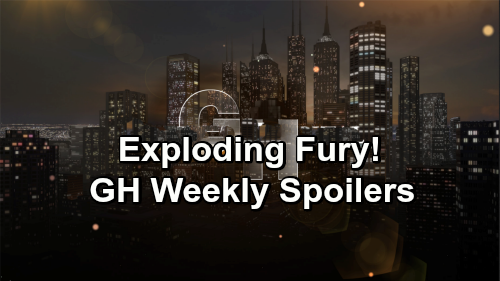 General Hospital (GH) spoilers for the week of January 28-February 1 tease that some surprises are in store. For starters, Sam McCall (Kelly Monaco) will revisit some loose ends that are still dangling. She’ll get back to tackling the threat she’s facing, which naturally involves Shiloh Archer (Coby Ryan McLaughlin).

Sam will mull over the tricky situation and determine that there’s only one way to handle it. She’ll form a plan and hope that it’s enough to shut Shiloh down. General Hospital spoilers say Sam will want to get closer to Shiloh. She’ll feel like it’s the only way she can make sure her loved ones stay safe, especially Kristina Corinthos-Davis (Lexi Ainsworth).

However, Sam’s plot will come with a drawback. She’ll have to keep her relationship with Jason Morgan (Steve Burton) quiet if she wants to get truly cozy with Shiloh. Over with Robert Scorpio (Tristan Rogers), he’ll have a bone to pick with someone. Robert will feel like someone’s been lying to him, so he’ll want to call this person out ASAP.

Will this involve the facts regarding the mystery virus? Could it be connected to missing Dante Falconeri (Dominic Zamprogna) instead? Either way, Robert will show his fierce side in the week ahead. Meanwhile, Julian Jerome (William deVry) will offer a stern warning to Brad Cooper (Parry Shen). He’ll insist that Brad had better stay away from Willow Tait (Katelyn MacMullen) or his secret could blow up.

Julian will be particularly concerned about Willow interacting with “Wiley” Cooper-Jones. He’ll think this can only lead to trouble, so he’ll try to shut it down. Across town, Ava Jerome (Maura West) will contemplate her future. She’ll wonder if staying in Port Charles is really the right call.

You can bet Ryan Chamberlain (Jon Lindstrom) will be driving Ava’s doubts about staying put. He’ll do everything he can to point Ava in the direction he wants. At GH, a newly awakened Lulu Falconeri (Emme Rylan) will struggle to recall her attack. She won’t remember anything that led up to the moment she was stabbed. The aftermath will be a big blur as well.

Meanwhile, Ryan will pay his brother a visit at Ferncliff. It looks like Ryan will tell Dr. Kevin Collins (Jon Lindstrom) about Lulu’s attack. General Hospital spoilers say Kevin will blow his top over this. He hates to hear about Ryan going after anyone, but he’ll be particularly upset that he targeted Laura Webber’s (Genie Francis) daughter.

Other GH spoilers state that Elizabeth Webber (Rebecca Herbst) will seek Brad’s help. She’ll want some advice on how to tackle things with Aiden Webber (Jason David). If Aiden turns out to be gay, Liz will want to make sure she’s prepared and can handle it well.

Finally, Oscar Nero’s (Garren Stitt) will face another health setback. The terminal teen is fading fast, so his loved ones will have to suffer this week. We’ll give you updates as other GH news comes in. Stay tuned to the ABC soap and don’t forget to check CDL often for the latest General Hospital spoilers, updates and news.