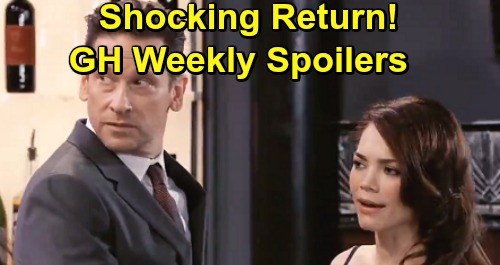 General Hospital (GH) spoilers for the week of July 8-12 tease that some special moments are coming up. Franco Baldwin (Roger Howarth) and Elizabeth Baldwin (Rebecca Herbst) will gather with their friends and family members on The Haunted Star. They’ll finally have a wedding reception to honor their love for each other and prepare for a bright future together.

As Kim Nero (Tamara Braun) prepares to attend this event, she’ll find herself feeling hopeful for the first time in a while. Kim hasn’t had much to celebrate lately, but it looks like she’ll manage to drag herself out of the apartment for this. It should help Kim to relax and not think about her crushing grief for a while.

Once the event gets underway, there’ll be dancing and a sweet song from Cameron Webber (William Lipton). His little brothers, Jake Webber (Hudson West) and Aiden Webber (Jason David), will help him out. Liz should be tickled pink along with Franco, who’s been longing to connect with Cam. The fact that Cameron put on this performance for them should mean a lot.

Liesl Obrecht Indulges Way Too Much And Falls Overboard

Of course, it wouldn’t be a GH party without a few mishaps. Liesl Obrecht (Kathleen Gati) will get drunk and end up falling overboard! She’ll also be plastered enough to divulge part of a secret to Franco. There’s a good chance that’ll involve Sasha Gilmore’s (Sofia Mattsson) fake daughter status, but Franco won’t quite get the full picture just yet.

Next, Liz will be floored when Hayden Barnes (Rebecca Budig) arrives. Hamilton Finn (Michael Easton) will be just as surprised once Hayden struts in. It seems she left the tot elsewhere, so Finn will have to find out about his son or daughter a little later.

Other General Hospital spoilers say Ava Jerome’s (Maura West) psychic will leave her rattled along with some other partygoers. Her predictions will definitely be on the eerie side. As for Josslyn Jacks (Eden McCoy), it appears she’ll decide to accept Cameron’s invitation too late. Cam will already be with Trina Robinson (Sydney Mikayla) when Joss joins them, so she may be bummed about that.

After the wedding reception winds down, there’ll be plenty of other action happening. Drew Cain (Billy Miller) will find himself in a very forgiving mood, so Kim may pour out apologies. She’ll probably be sorry for her recent baby breakdown, but Drew will totally understand. Grief is tough for any parent to process. Kim felt lost, so Drew will just be glad she’s on the right track now.

Over with Sam McCall (Kelly Monaco), she’ll have a bit more hope about taking Shiloh Archer (Coby Ryan McLaughlin) down. It looks like Sam will go to Mac Scorpio (John J. York) with new evidence. Oscar Nero Quartermaine’s (Garren Stitt) will reading will take some crazy turns soon after. Shiloh will be an unwanted guest around that time, so he may wind up going to the gathering.

General Hospital spoilers say drama will explode before this will reading concludes. The result will be relief for Sam, a bombshell for Lucas Jones (Ryan Carnes) and a step toward healing for Willow Tait (Katelyn MacMullen). That sounds like all the elements for a “the real Wiley is dead” reveal.

The week ahead will bring lots of excitement, so don’t miss these great episodes. We’ll give you updates as other GH news comes in. Stay tuned to the ABC soap and don’t forget to check CDL often for the latest General Hospital spoilers, updates and news.