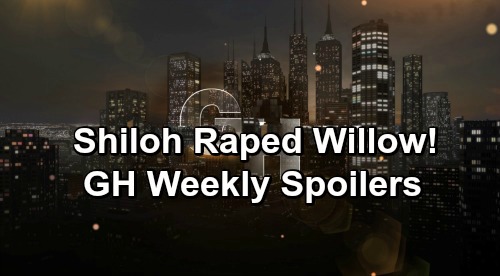 General Hospital (GH) spoilers for the week of March 25-29 tease that we’ll see some dangerous situations. First, Michael Corinthos (Chad Duell) will grow increasingly concerned about Kristina Corinthos-Davis (Lexi Ainsworth). He’ll take steps to help her along with Alexis Davis (Nancy Lee Grahn), who will call the police commissioner. She may think it’s time to give Jordan Ashford (Briana Nicole Henry) the heads-up.

Shiloh Archer (Coby Ryan McLaughlin) is running a cult that’s seemingly a great risk to those who join. However, Jordan may not be able to much of anything without proof. Of course, Sonny Corinthos (Maurice Benard) won’t care about finding evidence at all. He’ll smell a rat from a mile away and inevitably want to take violent action.

Sam McCall (Kelly Monaco) may be able to talk Sonny out of that, but he’ll still team up with Alexis on some sort of strategy. Meanwhile, Jason will manage to get himself arrested, which will force Sam to choose sides. Perhaps she’ll have to back Shiloh up after a showdown between Shiloh and Jason.

Next, Willow Tait (Katelyn MacMullen) will open up to Harrison Chase (Josh Swickard). She’ll fill him in on her past with Dawn of Day and how she became involved with Shiloh. Willow will confess that Shiloh raped her, which led to her pregnancy and escape from the cult. She gave her baby away to give him a better life, but she’ll worry that’s in jeopardy now.

Chase will talk Willow out of leaving town, but she’ll remain on edge. The last thing Willow wants to do is tip Shiloh off to the son she believes is still alive. Over with Brad Cooper (Parry Shen), he’ll want to make better choices. Brad will want to live a life that “Wiley Cooper-Jones” can be proud of, but can he really do that with such a huge secret hanging over him?

Other General Hospital spoilers state that Anna Devane (Finola Hughes) will receive a surprising letter. While she mulls that over, Dante Falconeri (Dominic Zamprogna) will get a shock. That probably involves his upcoming nightmares. He just won’t be able to move past the horror he endured in Turkey.

Lulu Falconeri (Emme Rylan) will make a disturbing discovery soon enough. She may realize Dante’s issues are far worse than she expected. This couple will face another round of intense drama. Back with Anna, she’ll be haunted by Alex Devane Marick’s (Finola Hughes) parting words. Alex suggested Anna should tell Robert Scorpio (Tristan Rogers) she’s sorry she couldn’t see him one last time.

Anna will have to accept that another memory may not be her own. She’ll most likely fear that Robin Scorpio-Drake (Kimberley McCullough) isn’t her daughter, but this seems like the setup to learning Peter August (Wes Ramsey) isn’t actually her son. GH will probably pull a “gotcha” later and leave Anna reeling, but perhaps not quite as much!