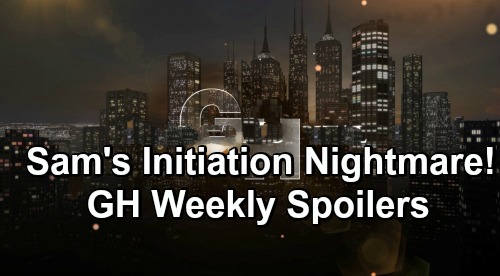 General Hospital (GH) spoilers for the week of May 20-24 tease that some hot drama’s ahead in Port Charles. For starters, Jason Morgan (Steve Burton) will get a phone call from someone in panic mode. Will Kristina Corinthos-Davis (Lexi Ainsworth) reach out in desperation? Could it be someone else looking to Jason for help? Regardless, Jason will do his best to handle the dire situation.

Later, Kristina will tackle the Dawn of Day drama head-on. She’s out of the cult, but she’s still worried about Sam McCall (Kelly Monaco). General Hospital spoilers say Kristina will confront her sister and wonder why she can’t see the truth. Sam’s normally a very intuitive gal, so Kristina will think she should see the warning signs. Now that Krissy’s thinking clearly, she’ll want Sam to do the same.

Sam will stick to the plan, but Shiloh Archer (Coby Ryan McLaughlin) will derail it later. After the duo leaves the Nurses Ball early, Sam will find herself feeling powerless. Shiloh will undoubtedly be ready to finish Sam’s initiation, but what if they don’t end up at the right location? Instead of Shiloh’s lair at the community house, he might take Sam back to the tower he once brought her to.

Of course, that’d be a real problem for Jason and Damian Spinelli (Bradford Anderson). They’ll end up frantic eventually, so Jason may be in a race against time as he works to get to Sam. Next, Sonny Corinthos (Maurice Benard) will fix a Mike Corbin (Max Gail) crisis. Perhaps some clues will emerge that tip Sonny off to the engagement ring’s true owner.

Sonny may convince Mike to give the ring back with the promise of replacing it. He’ll keep Mike’s spirits up, but what about Dr. Hamilton Finn’s (Michael Easton) proposal? General Hospital spoilers say Anna Devane (Finola Hughes) will feel overwhelmed and baffled this week. As all the ring chaos unfolds and Finn scrambles to explain how he feels, Anna will have a lot to take in.

Over with Josslyn Jacks (Eden McCoy), she’ll get a thoughtful letter from someone special. Did Oscar Nero Quartermaine (Garren Stitt) leave a note behind for her? What about that video he left behind? Will that come into play, too? Whatever the case, Joss could get some Nurses Ball courage.

As for Ava Jerome (Maura West), she’ll step out of the Nurses Ball and right into danger. Ava could put herself in Ryan Chamberlain’s (Jon Lindstrom) path, so we’d say a big faceoff’s on the way. Elsewhere, GH spoilers say Lucas Jones (Ryan Carnes) will have a stunning realization. The hints may lead him to the conclusion that Willow Tait (Katelyn MacMullen) is Wiley Cooper-Jones birth mom.

That’s true, but we’re no longer dealing with real Wiley. He died and was replaced by Jonah Corinthos, so Lucas won’t have all the facts. Even so, you can count on Lucas to let Brad Cooper (Parry Shen) have it for keeping secrets.

It sounds like a great week’s ahead in PC. We’ll give you updates as other GH news comes in. Stay tuned to the ABC soap and don’t forget to check CDL often for the latest General Hospital spoilers, updates and news.