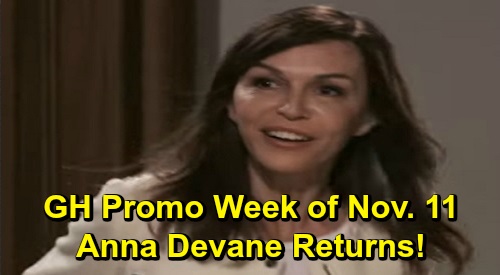 General Hospital (GH) spoilers tease that we’re in for an exciting week. The new GH promo promises an explosive revelation, a serious medical crisis, and an unexpected comeback, so let’s get right into it! First off, Jasper “Jax” Jacks (Ingo Rademacher) is going to be seriously upset with Nikolas Cassadine (Marcus Coloma). As GH viewers know, Nikolas was trying to neutralize Cassandra Pierce (Jessica Tuck) when she escaped from the back of his van and took off on foot.

Nikolas then called the police and gave them Cassandra’s general whereabouts, but now she’s on a mission to kidnap Charlotte Cassadine (Scarlett Fernandez) and everything’s a mess. Well, it looks like Jax will find himself in the middle of the mess, as he’s shown in the GH promo yelling at Nikolas in frustration and complaining that now he’s implicated in Cassandra’s escape. We’ll see exactly how Jax has become implicated, but it looks like he’s going to be knee-deep in this crisis.

Next, the promo addresses the medical crisis of Alexis Davis (Nancy Lee Grahn). As GH viewers know, Alexis has been poisoned by Kendra Lennon (Michelle Argyris) via the nutritional supplement that Kendra provided her. Kendra has gotten rid of the evidence, so it seems that even if Hamilton Finn (Michael Easton) narrows down what Alexis was poisoned with, they won’t have much luck in tracking down the source of the poison.

Meanwhile, it looks like Kendra will continue to visit with Alexis and play the doting personal trainer and friend, knowing full well that she’s the one who poisoned Alexis. Given the promo, it looks like Alexis will remain in the hospital and will be continuing to suffer symptoms, including a nasty-looking rash on her palms and hair loss.

Finally, the promo shows a major character return. Anna Devane (Finola Hughes) is shown suddenly returning to the home she shares with Finn, but it looks like she’s in for a big surprise, as it appears that Hayden Barnes (Rebecca Budig) will be there with Finn. Anna is shown happily walking in the front door and saying, “Hey, Finn, I’m home!” But then Finn and Hayden are shown together in the living room looking startled.

That should be quite a scene, but the big question at this point is whether Violet Barnes (Jophielle Love) will also be present when Anna returns. It would be a big shock simply to find Hayden with Finn, but to find out that Finn has a daughter by actually seeing Violet would be a pretty big scene, but it seems that may be where we’re headed. After all, Violet wanted to come visit and see Roxie the lizard.

It should be interesting to see how Anna reacts to finding Finn with Hayden. She and Finn will have a lot to talk about and catch up on. Will Anna be upset with Finn for keeping Hayden’s return and Violet’s existence from him while she was gone? If so, that could lead to some “Fanna” friction, but really what did Anna expect when she was gone and out of touch for so long?

At any rate, it looks like we’re in for an exciting week, so stay tuned! We’ll give you updates as GH news comes in. Stick with the ABC soap and don’t forget to check CDL often for the latest General Hospital spoilers, updates, and news.