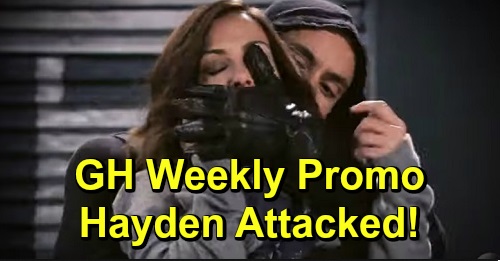 General Hospital (GH) spoilers tease that it will be a week of threats and secrets on the ABC drama. The new GH promo for the week of November 18th promises a lot, so let’s get right into it! First off, Valentin Cassadine (James Patrick Stuart) is shown in a menacing stance with Hayden Barnes (Rebecca Budig). Perhaps Valentin has put together that Hayden is part of the group that’s searching for the portrait of Helena Cassadine (Constance Towers).

Valentin doesn’t know what secrets the portrait may hold, but he strongly suspects that it’s something that could be used against him somehow. After all, Laura Collins (Genie Francis) has mentioned the portrait several times, and he overheard Laura and Jasper “Jax” Jacks (Ingo Rademacher) talking about the portrait at the Halloween party.

At any rate, Valentin seems to be targeting Hayden now, as he tells her “It’s going to get unpleasant.” That sounds pretty much like a threat, and one can only imagine what Valentin will threaten Hayden with. Of course, Hayden now has a daughter in the picture, so things could get tense if Valentin decides to play hardball and insinuate that something could happen to Violet Barnes (Jophielle Love).

Hayden is also shown later in the promo with some man attacking her from behind and putting his hand over her mouth as she’s on the phone with someone. It certainly looks like Hayden will be big danger this week. Nikolas Cassadine (Marcus Coloma), who Hayden is working with and is still married to, is also shown in the promo looking startled by something, so he may have a threat working against him as well.

Next, the promo addresses a big secret – that of Dev Cerci’s (Ashton Arbab) identity. Cameron Webber (William Lipton) is shown asking Dev, “If you’re not really Sonny’s cousin, then who are you?” Dev looks pretty taken aback by the whole accusation, so we’ll see what he comes up with to cover. We should note that Josslyn Jacks (Eden McCoy) is not shown in the promo, so she might not be around to help Dev scramble for an answer.

The promo also quickly flashes through a scene of Brad Cooper (Parry Shen) and Lucas Jones (Ryan Carnes) scuffling in an exam room at GH. Of course, Brad’s got a major secret that he’s keeping from Lucas about Wiley Cooper-Jones’ (Theo and Erik Olson) true identity. As GH viewers know, Brad currently has the upper hand against Julian Jerome (William deVry) and seems to have his relationship with Lucas back on track…at least for now.

Sonny Corinthos (Maurice Benard) and Olivia Quartermaine (Lisa LoCicero) are also shown in the promo looking upset and facing some issue together. Olivia is looking at a piece of paper and is visibly distraught, so this could have something to do with Dante Falconeri (Dominick Zamprogna). It’s possible Dante could be having serious difficulties or perhaps was transferred somewhere. We’ll see what this brings.

Finally, it looks like Neil Byrne (Joe Flanigan) will have put two and two together and realized that the most likely person who might have poisoned Alexis Davis (Nancy Lee Grahn) was Kendra Lennon (Michelle Argyris). GH viewers will remember that TJ Ashford (Tajh Bellow) has just figured out that Alexis must have ingested rat poison somehow, and that would obviously indicate a deliberate attack.

Alexis is shown in the promo expressing disbelief at Neil’s accusation, but it looks like she’ll get to worrying about the possibility, as she’s also shown looking startled when Kendra arrives at her hospital room for a visit. One wonders whether Alexis will play along with Kendra for now, in order to catch her in the act. We’ll see how this plays out, but it looks like Alexis and Neil are definitely onto Kendra.