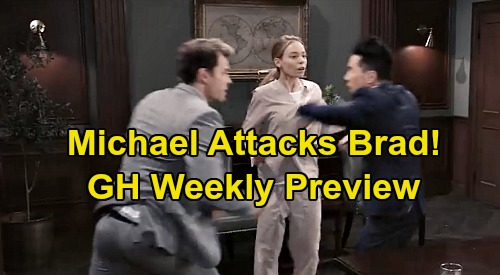 General Hospital (GH) spoilers preview tease that we’re in for some big moments as October barrels ahead. The new GH promo is called “Big October” and is all about some intense moments to be faced by various Port Charles residents in the coming week. The promo starts with Maxie Jones (Kirsten Storms) uttering the words, “Oh my God,” in reaction to something shocking, and then launches into a montage of intense scenes foreshadowing the action to come, so let’s get right into it!

First off, the promo shows Elizabeth Baldwin (Rebecca Herbst) and Kim Nero (Tamara Braun) literally running into each other at GH. The two ladies certainly won’t be happy to see each other, since they’re now embroiled in a legal fight over whether Franco Baldwin (Roger Howarth) should be allowed to get the memory reversal procedure. Kim’s got lawyer Martin Gray (Michael E. Knight) on her side, and he’s promised to make the whole case about identity and the reality that Franco now has become Drew Cain (Billy Miller) since he has Drew’s memories.

It looks like the conversation between Elizabeth and Kim will be contentious, as they’ve both resigned themselves to a big fight. Things are no longer even semi-friendly between the two, as they each are fighting for the man they love.

The promo also addresses the situation with Wiley Cooper-Jones (Theo and Erik Olson) and shows Lucas Jones (Ryan Carnes) pretty angrily asking Brad Cooper (Parry Shen) what else he’s hiding from him. It looks like Lucas will start growing more and more suspicious about Brad’s shifty behavior. Of course, Brad’s in a tizzy because Nelle Benson (Chloe Lanier) is trying her hardest to get out on parole. She’s asked Brad to speak for her at her parole hearing, which Brad feels he has no choice but to do.

Nelle seems pretty confident that she’s going to be released on parole, since she’s got Martin on her side. As GH viewers know, he recently agreed to take her case, and in the GH promo, Nelle is shown telling Martin that “I’m going to be out of Pentonville by tonight.” Of course, with Martin spearheading her case and Brad testifying for her, she just might have a shot at bring released.

However, there is someone who won’t be thrilled about the situation, and that’s Michael Corinthos (Chad Duell), who’s shown in the promo in what looks to be the judge’s chambers with Nelle and Brad. Michael is shown lunging at Brad and trying to physically attack him, as Nelle attempts to intervene in the altercation. Could Nelle have revealed the truth about Wiley being her son with Michael? Or will the altercation simply be over Brad helping Nelle by testifying for her?

Meanwhile, there will be other Pentonville drama, as Harrison Chase (Josh Swickard) visits with Ryan Chamberlain (Jon Lindstrom) at the prison. According to GH spoilers, Chase will be investigating Ryan’s latest act of violence, which doesn’t sound good. It seems that Ryan will have attacked someone inside the prison, and Chase will be on the case. He’s shown in the promo holding the Crimson magazine with Ava Jerome (Maura West) on the cover, while Ryan lunges at him.

And speaking of Ava, she’s also shown physically collapsing into Julian Jerome’s (William deVry) arms at The Metro Court. Perhaps she’ll get wind of Ryan’s violent act and will be upset over the whole thing, which will lead to a near-fainting spell. At any rate, she won’t look to be in good shape and will need some tending-to by her brother.

Finally, the new GH promo addresses the situation with Sam McCall (Kelly Monaco), who was just re-arrested for the murder of Shiloh Archer (Coby Ryan McLaughlin) after Bryce Henderson (Brian Gross) told the police and the FBI that Sam is the person who hired him to bust Shiloh out of prison. Of course, that’s all a lie orchestrated by Peter August (Wes Ramsey) to keep his identity as the person who helped capture Drew in Afghanistan a secret.

In the promo, Jason Morgan (Steve Burton) is frantic as Sam gets led away in prison garb by an officer, and he tells Diane Miller (Carolyn Hennesy) that Sam’s going to prison because of him. Could that mean that he and Damian Spinelli (Bradford Anderson) will finally put everything together and realize the connection between Peter and Drew and Jason’s abductions? Clearly, Jason has figured something out, but GH viewers will have to tune in this week to see exactly what it is.