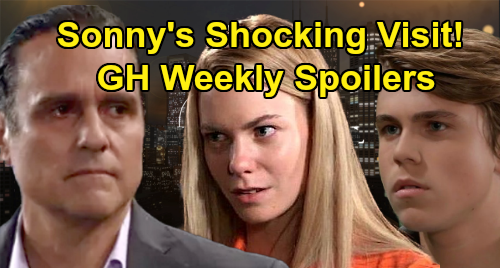 General Hospital (GH) spoilers for the week of September 2-6 tease that the drama’s about to rev up in Port Charles. Before we dive in, we should pass along a programming note. The episode airing September 2 will be a repeat, so you can either re-watch or go out and enjoy some Labor Day festivities. General Hospital will resume brand-new episodes starting September 3.

Now that we’ve got that out of the way, let’s discuss some looming shockers. General Hospital spoilers say Mike Corbin’s (Max Gail) cousin, Gladys, will make a return. She’s pretending to be Dev Cerci’s (Ashton Arbab) grandmother as part of Sonny Corinthos’ (Maurice Benard) plan to keep him in the country. Gladys will pop up when Sonny least suspects it, so will she have an agenda or perhaps a warning?

It’s possible Gladys will be sniffing around for more money. It’s equally possible she’s under suspicion and has gotten spooked. Gladys certainly won’t want to end up in prison, so she may need Sonny’s help. Over with Cameron Webber (William Lipton), he’ll step up as the man of the house. Nevertheless, he’s just a kid deep down – a kid who’s already been through a lot due to Oscar Nero Quartermaine’s (Garren Stitt) death.

Felicia Scorpio Will Have A Warning For Robert Scorpio

Cameron will hate the pain Elizabeth Baldwin (Rebecca Herbst) is dealing with, but he won’t know what to do. Things will get worse after Cameron witnesses Kim Nero’s (Tamara Braun) kiss with Franco Baldwin (Roger Howarth) in Oscar’s meadow. He’ll be stopped before he can confront them, but he’ll still find someone to lash out at.

Other GH spoilers say Felicia Scorpio (Kristina Wagner) will have a warning for Robert Scorpio (Tristan Rogers). He’ll remain wary of Peter August (Wes Ramsey), but he’ll also be concerned about Hamilton Finn’s (Michael Easton) growing bond with Hayden Barnes (Rebecca Budig). Robert may be tempted to butt in one or both of those situations in the week ahead, but Felicia may advise against it.

Over with Epiphany Johnson (Sonya Eddy), she’ll have some gloomy news to share. As for Finn, he’ll need info before he makes a judgment call. It sounds like there’ll be even more Sasha Gilmore (Sofia Mattsson) developments, so the suspense is definitely building.

Nelle Benson Will find Something To Amuse Herself With

Next, Liesl Obrecht (Kathleen Gati) will take drastic action and find satisfaction by pulling off her plan. Could Liesl kidnap Franco to make sure he sticks around? Kim will likely be trying to push Franco away at that point, so he may feel he has no reason to stay. Once Franco’s ankle monitor is removed, Liesl may scoop him up and stash him somewhere for a while.

It’s worth mentioning Kim will face devastation soon after Liesl’s move. She may think Franco has bailed, which could leave her heartbroken for both herself and Liz. Finally, Nelle Benson (Chloe Lanier) will find something to amuse herself at Pentonville. She tends to enjoy the misery of others, so maybe Shiloh Archer’s (Coby Ryan McLaughlin) plans will hit a snag.

However, Nelle seems to think she can sponge off Shiloh’s ELQ shares if she plays her cards right. She wants to get out of prison as much as Shiloh, so he could be a useful ally. General Hospital spoilers say some great episodes are coming up. We’ll give you updates as other GH details emerge. Stay tuned to the ABC soap and don’t forget to check CDL often for the latest General Hospital spoilers, updates and news.