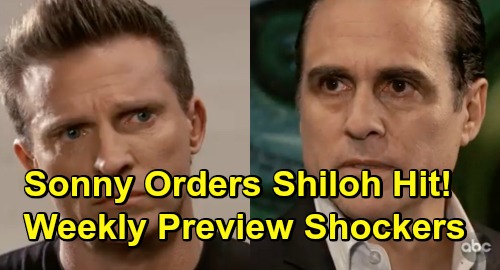 General Hospital (GH) spoilers tease that the drama will heat up in Port Charles this week. The new weekly promo entitled “Eliminate Him” sets up some gripping scenes for the coming week. First off, Shiloh Archer (Coby Ryan McLaughlin) is shown removing his shirt and asking Sam McCall (Kelly Monaco) if she’s sure she’s ready for something. It looks like she’ll be taking the next step to joining “The Trust.”

But shockingly, Sam is shown standing in front of Shiloh, beginning to unbutton her own shirt. This seems far different than the procedure that Kristina Corinthos-Davis (Lexi Ainsworth) went through when she was going to join “The Trust.” We’ll see exactly what Shiloh has in mind, but it looks like Sam may be getting into a difficult situation.

Meanwhile, on the new General Hospital promo, Sonny Corinthos (Maurice Benard) is shown having a stern talk with Jason Morgan (Steve Burton). They both look ultra serious, and Sonny gives an ominous order: “I am done with this. Eliminate him.” It appears that Sonny will have had enough of Shiloh’s influence in his family’s life after learning more about Dawn of Day (DOD) during Kristina’s intervention.

This doesn’t bode well for Shiloh’s future. Now that Jason has the order to eliminate, he’ll be looking for the first opportunity to act. Meanwhile, another Port Charles resident will be facing a life-threatening condition. Jordan Ashford (Briana Nicole Henry) is shown collapsing at the hospital, and TJ Ashford (Tajh Bellow) is sown telling Jordan that if her existing kidney goes into failure before she gets a transplant, she will die.

Of course, Jordan is working herself too hard and has been back to work full-time and squeezing dialysis into the picture. That’s not a good way to go, so we might indeed be looking at a Jordan transplant storyline very soon. Of course, Oscar Nero (Garren Stitt) will be dying shortly, but since he has cancer, he’s not going to be a viable candidate for a donor.

But there’s always the possibility that Shiloh will, in fact, get eliminated and be able to provide a donor kidney for Jordan. Viewers will have to wait to see whether that pans out, but considering that Shiloh’s elimination was mentioned in the same promo as Jordan’s collapse, we’d say it’s a good possibility.

Finally, the new General Hospital promo shows Oscar in the Quartermaine gardens chatting with Kim Nero (Tamara Braun), Jason, and Drew Cain (Billy Miller). It seems that Oscar will have a request for his dad and Jason. He’ll tell them that it would mean a lot to him if Jason and his dad could learn how to be brothers.

Of course, that’s a tall order given everything that’s gone down between Jason and Drew, but the adults will surely agree to work on Oscar’s request going forward. Oscar is really trying to set the people he loves on a good path, and Jason and Drew will almost certainly agree to try their best.

It looks like we’re in for an exciting week in Port Charles! Stay tuned to the ABC soap and don’t forget to check CDL often for the latest General Hospital spoilers, updates, and news.