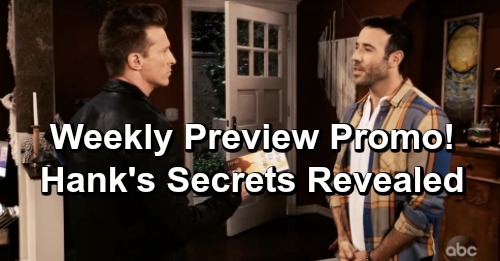 General Hospital (GH) spoilers for the week of January 2 – January 4 tease that some great drama’s coming up. GH is back with brand-new episodes starting Wednesday, January 2. General Hospital’s latest promo offers a glimpse of what’s ahead, although some of the chaos could spill over into next week.

First, let’s talk about smitten Harrison Chase (Josh Swickard). He’s enjoyed some pleasant dates with Willow Tait (Katelyn MacMullen) lately and that trend will continue. It looks like Chase will work out with Willow at the boxing gym, so maybe he can show off his muscles as he flirts.

Willow will keep Chase interested by playing just a little hard to get, but she’s definitely on board for this romance. General Hospital spoilers say their feelings for each other will grow stronger, but so will Willow’s bond with Michael Corinthos (Chad Duell). That could leave Willow a bit conflicted down the road.

In the meantime, Drew Cain (Billy Miller) will meet “Hank” (Coby Ryan McLaughlin). He’ll shake this mystery guy’s hand and wonder if he can really trust him. Hank will flash a smile and chat with Drew about his past, but he’s not exactly who he claims to be. It’s doubtful Hank is Drew’s old buddy at all.

Regardless, Hank does have knowledge of Drew’s history and he intends to use it to his advantage. General Hospital spoilers say several major plots will collide. Sam McCall (Kelly Monaco) will gaze at her laptop and declare that something’s up. She may ask Jason Morgan (Steve Burton) for help as those puzzling emails become a bigger problem.

Jason will remain suspicious of Hank, so he’ll end up talking to him again and getting a significant gift. Based on GH’s weekly preview, it seems Hank will hand over Every Day is a New Dawn – the same book Daisy (Kelsey Wang) praised to Kristina. That means Hank probably ties in with Kristina’s cult story, the mystery surrounding Drew’s past and the threat that Sam’s dealing with.

Once Jason and Sam sort it all out, they may approach Drew and come up with a game plan together. Like it or not, Drew and Jason might have to team up! Over with Laura Collins (Genie Francis), she’ll be stunned when someone taps her on the shoulder. The voiceover refers to this as “one moment you won’t believe,” so is a special guest about to hit town?

Then again, General Hospital spoilers say Ryan Chamberlain (Jon Lindstrom) will support Laura soon. Even though Ryan will obviously have an agenda, the fact that he’ll treat Laura with kindness will still be a shocker! We’ll give you updates as other GH news emerges. Stay tuned to the ABC soap and don’t forget to check CDL often for the latest General Hospital spoilers, updates and news.