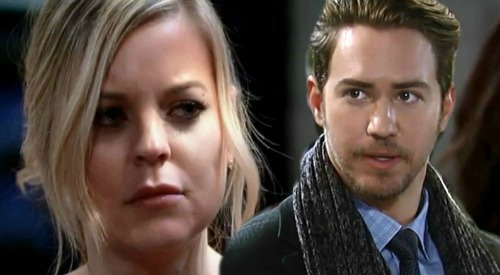 General Hospital (GH) spoilers tease that Peter August (Wes Ramsey) and Maxie West (Kirsten Storms) could be in for some interesting times ahead, and perhaps even some relationship-testing tribulations. As GH viewers know, Maxie recently fended off some pretty harsh comments from Robert Scorpio (Tristan Rogers) who openly referred to Peter as a “dirtbag” to Maxie.

Well, Maxie wasn’t impressed by Robert’s words, and she proceeded to give him a piece of her mind, but might his comments linger and make her wonder about the wisdom of being in a relationship with Cesar Faison’s (Anders Hove) son? There are some new reasons to think it might, as well as to think that we may see “Paxie” face some relationship challenges down the road.

In a recent exclusive interview with Soap Opera News, Wes Ramsey, who portrays Peter August, was asked about Peter and Maxie’s relationship, and in particular about how long their relationship will remain in the “soap honeymoon” phase – that is, the relatively conflict-free period that soap couples enjoy after initially getting together.

Wes responded with this: “Paxie has worked to have happiness. Their friendship, newfound romance, and happiness are based on everything they survived. Of course in the world of Port Charles, those things can be tested at times. It’ll be interesting to see what lies ahead for them. And to see what they’re capable of enduring during the tests that will come to challenge the relationship.”

So, based on Wes’ answer, can we expect to see some relationship challenges down the road for Paxie? The couple hasn’t been together too long, but it seems that at some point they’ll want to consider where they want to take things long-term. Peter’s lack of serious relationships in the past could make it difficult for him to know where to go from here, and that could cause some friction.

Or even a new identity crisis for Peter, if he were to find out that his mother might not be Anna Devane (Finola Hughes) but could be Alex Devane (Finola Hughes) instead. He might have a really tough time knowing that Alex could be his mother yet remains totally uninterested in having a relationship with him. Of course, Maxie would surely do her best to support Peter, but Peter tends to push people away as a first response, so Paxie could experience a divide there.

Time will tell exactly what ends up challenging the couple, but since GH is full of drama, it’s clear that Paxie will get their share soon enough. What challenges do you think Maxie and Peter will face down the road? Stay tuned to the ABC soap and don’t forget to check CDL often for the latest General Hospital spoilers, updates, and news.