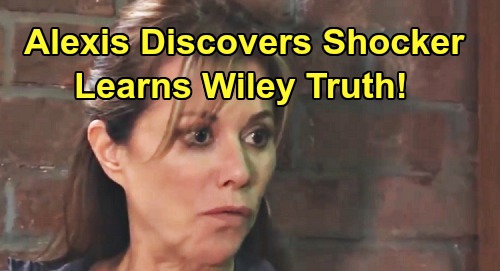 General Hospital (GH) spoilers reveal that fans are eager to see some resolution on all the “Wiley Cooper-Jones” (Erik and Theo Olson) drama. Unfortunately, it’s looking less and less likely that any sort of resolution will come during November sweeps. Does that mean we’ll have to wait until February sweeps before Michael Corinthos (Chad Duell) learns “Wiley” is actually his son, Jonah Corinthos?

Time will tell, but GH at least needs to have some massive development. This storyline is dragging, so they really need to bring someone else in the loop. General Hospital may not want to alert the key players like Michael, Willow Tait (Katelyn MacMullen) and Lucas Jones (Ryan Carnes). However, the least they can do is let someone else uncover the shocker.

Could Alexis Davis (Nancy Lee Grahn) find out this startling secret? It’s certainly an option to consider based on the latest clues. General Hospital spoilers say Hamilton Finn (Michael Easton) will diagnose Alexis soon and will put her on the path to recovery. Naturally, Kendra Lennon (Michelle Argyris) isn’t going to like that Alexis is on the mend.

GH buzz has it Kendra will try to kill Alexis with her car, but not before Alexis discovers a bombshell. Since it seems Neil Byrne (Joe Flanigan) will be cracking the Kendra case elsewhere, there’s really no need for Alexis to do the same. Neil should have that covered, so it opens the door for Alexis to find out something else – like “Wiley’s” true identity and the fact that Brad’s been lying to everyone.

Alexis would actually be a good person to get involved here. She helped Brad and Lucas handle the adoption, so she’s tied to the story already. Alexis would have to decide whether she’s willing to rip apart the family she helped create. It could mean destroying Julian Jerome’s (William deVry) chances of ever repairing the latest damage with Lucas. Blabbing could mean permanently ending Julian and Lucas’ relationship, so this isn’t a decision Alexis would take lightly.

Alexis’ own career could be on the line as well. Who’s to say Brad wouldn’t accuse her of being in on this all along? It could be payback for Alexis spilling the beans. Brad clearly can’t be trusted, and that’ll be especially true if he’s got nothing left to lose.

Even so, Alexis has daughters she loves very much. The mother in her may want to end Michael’s suffering. Alexis might decide that despite the chaos this could unleash, she has to reveal the truth. All of this lines up with info pointing to an extremely tricky dilemma for Alexis.

General Hospital buzz hints that Brad’s car may collide with Kendra’s hit-and-run plan. Could Brad chase after Alexis following her discovery? Will he crash into Kendra and be on the scene to face a tricky dilemma of his own? Brad might have to decide whether to save Alexis and risk her exposing him or let her die on the spot.

There’s a chance Alexis could choose to keep quiet, but we can’t rule out a coma or memory loss either. Of course, this GH story is still developing, so new details will continue to shape it moving forward. We’ll give you updates as other news comes in. Stay tuned to the ABC soap and don’t forget to check CDL often for the latest General Hospital spoilers, updates and news.