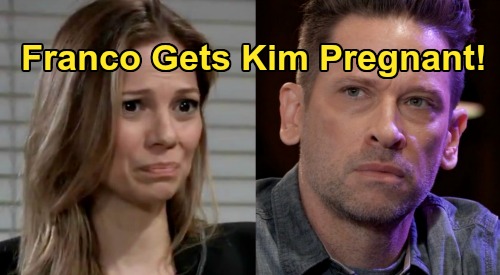 General Hospital (GH) spoilers tease that Kim Nero (Tamara Braun) will find herself pulled in Franco Baldwin’s (Roger Howarth) direction. She was floored when he planted that kiss and shared astonishingly accurate memories. Franco knows Drew Cain’s (Billy Miller) past quite well and remembers the love they had once upon a time. Of course, it doesn’t seem so long ago to Franco!

Kim’s set to leave Port Charles with Julian Jerome (William deVry), but psychic Chelsea Lambas (Jen Ray) already suggested Julian wasn’t going anywhere. There’s a good chance Kim will stick around as well, and that’s because of Franco-Drew’s enduring love. Kim will reflect on old times and ultimately have a visit with Franco. She’ll move past her shock and enjoy hearing stories from Drew’s perspective.

We have to remember that Kim’s been through a lot lately. Oscar Nero Quartermaine’s (Garren Stitt) death was brutal, so Kim lost control for a while. It hasn’t been that long since Kim nearly raped Drew in hopes of conceiving a child. She now understands that was wrong and a terrible idea, but what happens as Franco and Kim begin to reconnect? Could General Hospital revisit the baby drama?

This isn’t the real Drew and wouldn’t be a full sibling for deceased Oscar. It also doesn’t seem like Kim’s hung up on that plan anymore. However, most GH babies aren’t planned at all. If a hookup happens, Kim could find herself pregnant by Elizabeth Baldwin’s (Rebecca Herbst) husband!

During the week of August 26-30, General Hospital spoilers say Franco’s actions will prove disappointing. His behavior will be a letdown to Liz and will go against Liesl Obrecht’s (Kathleen Gati) advice. Liz’s phone call to Kim will also be ignored, so it seems there’ll be plenty of alone time. The romantic mood could make Kim want to rekindle things, even through Franco is only Drew through his memories.

Billy Miller’s exit could also be a factor here. Kim could be plunged back into grief if Drew is presumed dead or lands in a lengthy coma. Drew could also vanish and leave Kim with questions. Regardless, it doesn’t look like a recast is brewing anytime soon. Drew will be gone from Kim’s life, so she should cling to Franco even more.

Having Kim get pregnant by Franco would open up some interesting story possibilities. That’d be a huge “Friz” hurdle to contend with down the road. After Franco inevitably gets his memories back, he may be horrified over his own betrayal. Naturally, GH could always take the miscarriage route if they didn’t want long-term issues. That could still set up Kim’s potential exit at some point.

Do you think Kim will get pregnant by Franco? Will she hit the sheets with Franco’s version of Drew and earn a bun in the oven? We’ll give you updates as other GH news comes in. Stay tuned to the ABC soap and don’t forget to check CDL often for the latest General Hospital spoilers, updates and news.