General Hospital Spoilers: Will Vengeful Kristina Order Mob Hit on Shiloh – Decides to End DoD Nightmare Once and For All? 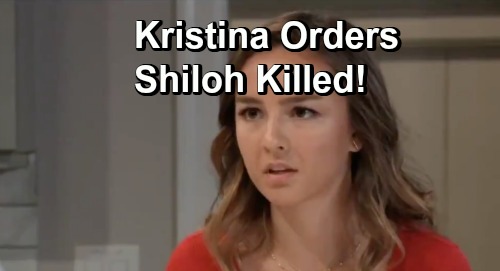 General Hospital (GH) spoilers tease that Kristina Corinthos-Davis (Lexi Ainsworth) will be furious after Shiloh Archer (Coby Ryan McLaughlin) is released from police custody. GH fans know Shiloh drugged and attempted to rape Sam McCall (Kelly Monaco). He succeeded in raping many more, so he certainly deserves to go down for his crimes.

Unfortunately, Shiloh will convince someone else to take the blame, which means he’ll walk free. Kristina will hate the fact that Shiloh can go right back to manipulating vulnerable women. However, Kristina isn’t so vulnerable anymore. With the help of her family and Dr. Neil Byrne (Joe Flanigan), Kristina is regaining a sense of who she is and gathering strength.

Will Kristina use that strength to make a dangerous decision? She may ultimately decide she started her family’s mess by getting involved in DoD. Kristina may think she should be the one to end it, too. Could Kristina take a page from her father’s playbook and order a mob hit on Shiloh?

General Hospital fans know Sonny Corinthos (Maurice Benard) is a mob boss, and Kristina grew up in the loop. For most of her life, Kristina didn’t agree with her dad’s business. Nevertheless, after being beaten by her boyfriend, kidnapped and almost killed by her father-in-law, Kristina can see that the mob has its advantages.

If Alexis Davis (Nancy Lee Grahn) can murder someone and Sonny can have people killed for hurting his family, Kristina may resort to the same deadly tactics. It’s not a decision she would take lightly, but she could be driven to it. Shiloh targeted Kristina and reeled her in with his lies. She could’ve been violated just like Sam almost was.

All of Sonny’s men know Kristina and would do anything to help her. Kristina could easily explain that she doesn’t want to upset Carly Corinthos (Laura Wright) by asking Sonny to order the hit. She could also view this as a way to step up for her family like they stepped up for her. It’d be interesting to see Kristina turn into the mob princess and work alongside her father instead of struggling to find a career.

If Kristina orders this hit and the men follow through, she could unintentionally put but Sonny and Jason Morgan (Steve Burton) at risk. They’ve tried to shut down Shiloh without killing him to spare Kristina guilt, but maybe deadly action will come from her in the end. With Jason attacking Shiloh twice, he’d the first person the cops would suspect. Could Kristina pick a man competent enough not to get caught or point the finger at Sonny or Jason?

Another option for Kristina would be to kill Shiloh herself. Kristina could pretend she’s ready to come back to Dawn of Day before taking the cult leader out. Their meeting could take a bloody turn, but Kristina might claim she was attacked. Attempted rape or murder could be justifiable homicide if Kristina called the cops. Then again, Kristina could give Sonny a call and have his men dispose of the body.

General Hospital spoilers say Sonny will need a successor at some point, and it should be one of his children. Michael Corinthos (Chad Duell) has ELQ, Morgan Corinthos (Bryan Craig) is gone and Avery Corinthos (Ava and Grace Scarola) is too little. The new baby will be too young as well. Kristina would be the best fit out of all Sonny’s kids. She’d be the ideal replacement for Sonny one day.

Do you think Kristina’s character will take a dark turn? Could she order a mob hit on Shiloh or try to take him out herself? We’ll give you updates as other GH news comes in. Stay tuned to the ABC soap and don’t forget to check CDL often for the latest General Hospital spoilers, updates and news.