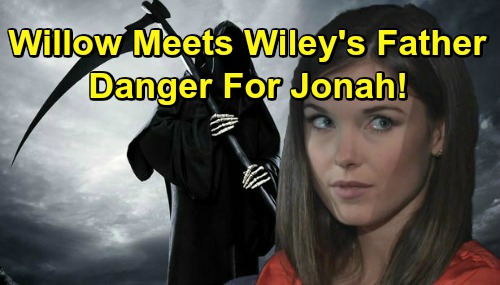 General Hospital (GH) spoilers tease that Harrison Chase (Josh Swickard) will try to kick his romance up a notch. Things have been going well for Chase and Willow Tait (Katelyn MacMullen) lately. In fact, Chase will think they’re ready to take a big step. It looks like he’ll plan a weekend getaway and hope Willow’s on board.

Willow resisted a bit at first, but she seems pretty into Chase now. He’s sweet, funny and handsome, so what’s not to like? Willow may think a weekend together sounds fun, but something could derail their little trip. General Hospital spoilers say Willow will go into panic mode on March 20.

With that in mind, we have to wonder what would make Willow panic. She knows Brad Cooper (Parry Shen) is in the loop on her birth mom status, but she thinks it’s safer if they keep that under wraps. Brad’s all for that since Willow isn’t really the mother of “Wiley Cooper-Jones” aka Jonah Corinthos.

However, Willow probably wouldn’t panic if this GH shocker spread to certain people. Lucas Jones (Ryan Carnes) and Michael Corinthos (Chad Duell) are the two people most likely to find out, so she could just swear either one of them to secrecy. Brad would be the only one panicking in that situation!

Willow will need more if she’s going into full-blown crisis mode, but it could still involve some secret spillage. Since Willow and Chase may be going out of town, perhaps Willow will run into Wiley’s father at their destination. That’d be a good opportunity for her to cross paths with the guy if he’s not from Port Charles. Willow seems terrified of her “baby daddy,” so that would definitely leave her reeling.

If this man was obsessed with Willow, he could easily follow her back to PC and figure out she gave her kid up for adoption. The math might add up and convince him to take action. Then again, there’s still a chance Shiloh Archer (Coby Ryan McLaughlin) is the father of Willow’s child. In that case, Willow may spot Shiloh before her weekend plans with Chase and get rattled.

Regardless, Willow will fear the worst soon enough. Whether Wiley’s dad is Shiloh or some other sinister character, Willow will deal with a terrible face from her past. General Hospital spoilers there’ll be a sudden threat to Jonah, so this could spark some big story developments.

Are you looking forward to what’s next in this hot plot? We’ll give you updates as other GH news comes in. Stay tuned to the ABC soap and don’t forget to check CDL often for the latest General Hospital spoilers, updates and news.