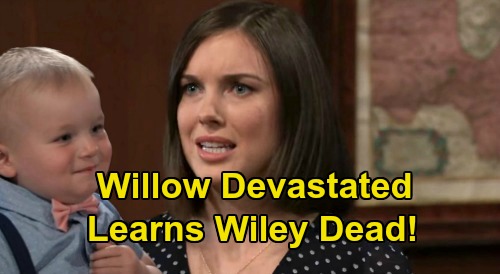 General Hospital (GH) spoilers tease that Willow Tait (Katelyn MacMullen) has a devastating blow headed her way. The real Wiley Cooper-Jones died the night he came home from the hospital, which led to Brad Cooper (Parry Shen) switching babies with Nelle Benson (Chloe Lanier). Ever since that fateful moment, Brad’s been sitting on a ticking time bomb – one that’ll explode in many different ways.

GH has crafted an intricate storyline with this baby swap plot, so things could play out in layers. It makes sense to save the biggest reveal of all for the end. There’s no need to unleash the Jonah Corinthos shocker too early. General Hospital has another bombshell they can go with first, and it’s the fact that Willow’s baby has been dead all along.

It’ll be heartbreaking when Willow ultimately realizes this “Wiley” isn’t her own. She recently had a conversation with Michael Corinthos (Chad Duell) about how “Wiley” looked nothing like Shiloh Archer (Coby Ryan McLaughlin). Willow added that “Wiley” didn’t really look like her either. Of course, Michael had to point out just how much he looked like “Wiley” when he was that age.

The clues are revving up now, but Michael will have a lot on his plate as he deals with Sasha Gilmore’s (Sofia Mattsson) secret. She’ll admit she’s not Nina Reeves’ (Cynthia Watros) real daughter, so Michael will have to decide what he’s going to do. It seems Michael may be busy when Brad comes clean to Willow.

Brad can always rely on the story he first told Julian Jerome (William deVry), which is that he traded kids with a random woman who couldn’t take care of her child. That could keep the Jonah secret in play and set up the major fallout for a little later. Brad could convince Willow to keep quiet – with the exception of telling Harrison Chase (Josh Swickard) the truth.

You might argue that the timing of this swap would raise suspicions, but it didn’t for Julian at first. It was only when he realized Liesl Obrecht (Kathleen Gati) was involved that it all clicked into place. Regardless, it appears another round of Shiloh drama may force Brad’s confession. Willow will desperately need Chase’s comfort on September 24, which is the same day Shiloh will express reluctance.

Will Shiloh steal “Wiley” and hear this confession, too? Could that make Shiloh reluctant to believe Brad’s tale? Brad will stammer out a flood of apologies on September 25, so he may let Willow know how sorry he is for his deception. She’ll be hit hard with grief she never expected, but at least she’ll have Chase to lean on.

How long can Brad’s story really hold up? If Michael finds out Brad swapped the babies, the puzzle could start coming together. Michael might not figure it out right away, but he’ll inevitably get a step closer soon.