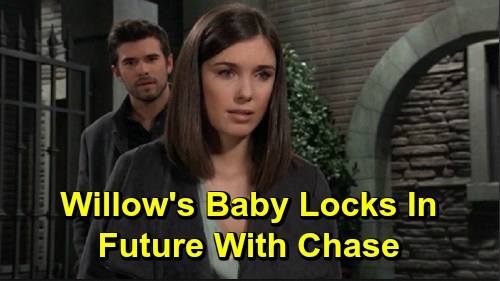 General Hospital (GH) spoilers tease that Willow Tait (Katelyn MacMullen) will have to face her fears and find out if she’s really expecting Harrison Chase’s (Josh Swickard) baby. GH fans know Willow’s been worried about the possibility. She’s late and has been feeling nauseous, so she opened up to Sasha Gilmore (Sofia Mattsson) when pressed.

Since Willow may have missed taking her birth control a few times, she realizes she could indeed have a bun in the oven. It looks like a pregnancy test will confirm that during the week of December 2-6. Willow will seek the truth and confess to Sasha later, so she’ll probably want some advice before she tells Chase he’s going to be a father.

Chase and Willow planned on having kids someday, but that was part of their long-term goals. They undoubtedly wanted to date a while longer and ultimately get married first. However, soap babies come when their moms and dads least expect them. This pregnancy could be a good sign about Willow’s future with Chase. It could also serve as some light in the darkness after the truth about “Wiley Cooper-Jones” (Erik and Theo Olson) comes out.

Of course, we have to wonder what’ll happen to Michael Corinthos (Chad Duell) after he gets Jonah Corinthos back. Michael’s currently with Sasha, but are they meant to last? Everyone had been assuming Willow would help Michael raise Jonah. GH had been building up Michael and Willow’s bond, so they could’ve given them a shot as love interests. Willow’s pregnancy suggests the show may stick with “Chillow” for a while instead, so Michael may need another lovely lady to help him raise his son.

Now we’re not saying Michael couldn’t do the whole single dad thing. We’re just saying this is a soap and they probably won’t let him. Sasha could help Michael, but is she the maternal type? Will they last long enough for her to be on Mommy duty? General Hospital might pair Michael up with someone else down the road. Maxie Jones (Kirsten Storms) could be an interesting option since her relationship with Peter August (Wes Ramsey) is on the verge of destruction.

Then again, the show could find some other love interest for Michael. He could also still get some friendly help from Willow as she prepares for her own bundle of joy. Whatever the case, General Hospital spoilers say Michael will have a lot to figure out! We’ll give you updates as other GH news comes in. Stay tuned to the ABC soap and don’t forget to check CDL often for the latest General Hospital spoilers, updates and news.