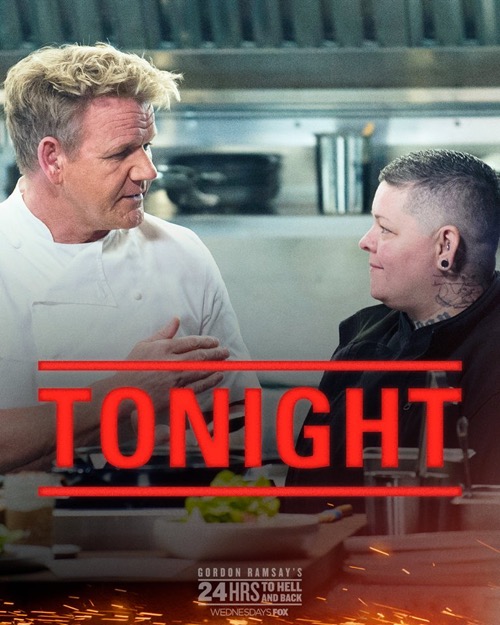 Ramsay will try to bring this failing restaurant back from the brink of disaster—all in just 24 hours.”

Gordon Ramsay takes his “Hell on Wheels” to Shanty on 19th in Allentown, Pennsylvania, which is in the theater district. Joe and Melanie are the owners who have tried to recreate the food, complaining that her husband, Joe doesn’t know fine dining, he is better at running a sports bar. Kennedy is the executive chef and his dad is helping out because lack of business is hard to keep staff on. Currently, they are in debt by over half a million dollars, as Joe drinks more than he ever has and Melanie says their marriage is on the brink of falling apart.

Once again, Gordon’s team tells the restaurant they are in for a renovation show and hid cameras while interviewing staff. Gordon dresses in a Lehigh Valley Phantom’s hockey jersey. The restaurant is in a nice area but the décor is lacking any sort of identity and looks more like a beaten down sports bar. The menu is huge and they order a hodgepodge of menu items; as they wait for their food all the customers can hear Joe screaming and swearing with Kennedy.

The camera caught unsanitary cooking, burnt scallops, where Gordon is unable to eat his scallops as they taste frozen. He is frustrated they have been sitting for over 45 minutes and don’t have their appetizers. When the food does arrive, Gordon tells them not to eat the shrimp as they taste sour, tells them not to eat too much and removes his disguise quickly returning to the dining room.

Chef Gordon Ramsay calls Joe and Kennedy out of the kitchen, explaining what they heard and dealt with from the second they arrived. Kennedy admits there is a lot of stupid stuff said there by the staff. He asks all the customers to put their cutlery down and follow him to Hell on Wheels. They see how there is spitting in the food, a filthy kitchen, moldy food and how the staff is sticking their fingers in the food/sauces; serving raw fries while the owner is drinking all day on the job.

Joe is embarrassed as sous chef Tommy says Joe is a great guy but keeps their hands tied; not allowing them to make any changes. Kennedy wanted to revamp the menu but Joe refuses to let go of anything and his father, Joe Sr. defends his actions. Gordon tells them they have 24 hours to fix the place and it starts right now. He tells Joe to get his head in the game, asking customers to return in 24 hours, all willing to give him the chance. Joe is furious he got verbally beaten up and his wife threw him under the bus.

Gordon confronts Joe Sr. about spitting in the food, which he denies. He calls Kennedy a “glorified prep cook” and suggests she hire people to help her, but she calls him stupid saying his son is the one who doesn’t have the money to hire people. Tommy jumps to Kennedy’s defense but Melanie wants her to calm down, worried about her heart. Gordon finds out that Kennedy has a heart condition for the last 5 years. He tells her to calm down and asks Joe Jr why he is allowing his father to be so negative, undermining the staff and humiliating them.

He points his finger at Joe Sr. saying he is the most negative person in this restaurant. Joe says he doesn’t know what to do, but Gordon tells him he needs to fire his father. Joe says he needs to go, but Gordon tells him to get the hell out, as he is fed up with the chase and negativity. Joe Sr. feels Kennedy is the problem as Gordon wants to know why she allows the food to be so horrible, but Gordon tells her she needs to take accountability somewhere and the restaurant is in financial ruin. Melanie reveals how Joe Jr. treats her and locks her out, saying it isn’t her restaurant. Gordon stands up for her, saying she is working another job to put money in the till only for him to be drinking.

Gordon has everyone’s commitment as his team walks in to help transform the Shanty. While they work on the new layout, Gordon checks out the kitchen. There is no refrigeration in one area and one of the fryers blows out flames during service. Once he enters the fridge, Gordon finds out that Joe is buying the cheapest of cheap product and they find mouse droppings all over the kitchen. Gordon says he could get shut down as it is a ticking time bomb in the kitchen. He tells everyone to clean up the kitchen as it is a disaster.

Gordon takes Melanie to the Civic Theater, admitting she hasn’t been there since she was young. Melanie admits she is ashamed at how Joe runs the place but it is hard for her to stand up to him because he completely shuts him out. Gordon feels drinking has gotten to be a huge problem for Joe, revealing he saw his mom deal with his alcoholic father, asking if Melanie ever thought about leaving him. There is 19:55 hours left!

Melanie is tired and feels she can’t keep doing this. Gordon has a tough time supporting Joe as Melanie says he is a good man with a good heart, but Gordon says she needs to take the reigns and then he will help him because Joe’s way is not the way to go and he needs to listen and respect her before it is too late.

It is clear that his renovation team is going to push hard to finish in less than 19 hours. Gordon takes Kennedy to his kitchen, telling her that going forward she needs to take responsibility. He shows her the menu, which she is thrilled is only on one sheet and one side only. He promises that for now, everything is going to fresh, but he is concerned about her heart condition; admitting he has a temper as she does, but she needs to turn the passion to her cooking.

Kennedy, Tommy, and Joe work hard on the food while Gordon feels he needs to talk to Joe alone. It is 2:15 am, as Gordon asks him to hear him out. He reminds him the party is over, questioning his drinking and what has happened to him. There are 13 hours and 27 minutes left as Joe feels today was a punch in the head, they are still talking at 2:50 am. Joe feels insecure and worried about failure. Gordon says he grew up with an alcoholic father and it is a very lonely place so Joe needs to change. He reminds him that his team is not deserting him, they have just had enough. He says Joe needs to make Melanie be his general manager and needs to listen to her. Joe says she is amazing and wouldn’t be anywhere without her. They finish talking at 3:28 am.

Joe finds Melanie and hugs her tightly, saying that Gordon is a terrific guy. He tells Melanie he loves her and needs her, the only way this is going to work is together by him listening and change; hoping things will go back to the way they were. He says he won’t be boozing anymore as he is reminded about how much she means to him; calling this the biggest reality check of his life. Melanie says she believes he is sincere but if he isn’t, he will be out of a wife, job and restaurant.

Back at Hell on Wheels, Kennedy says she is nervous but he reminds her it is just in how they finish. Melanie is embracing her new role as general manager, with 52 minutes to go Gordon tells them to set up the line and bar as he wants them to make their dishes for staff to try. Just before opening, Gordon catches Joe licking his fingers and tasting the food and quickly reprimands him. They give him raw fish and says he cannot wipe Joe’s ass and there is no way they can open unless they are ready.

Gordon quickly gives them a pep talk as Melanie tells them if they stick together as a team, they are stronger together. Everyone counts down as the doors open to the staff, Joe tells customers that his beautiful wife, Melanie will take care of them. The Shanty has switched from a dive bar into a contemporary bistro and the kitchen is laced with state of the art equipment.

Food Critic Derek Timm is one of the guests, while Joe encourages customers to order the best burger ever. Customers are impressed with how much better it was from the day before and Kennedy is able to keep her temper in check. When Kennedy swears, Chef Ramsay tells her the food is incredible but the swearing is a No, No. Gordon reminds Joe Jr to allow Melanie to attend to the customers and Kennedy is the one running the kitchen.

It seems Joe Jr. doesn’t know what to do with himself and Gordon kicks him out of the kitchen, but he quickly returns calling off tickets which conflict with Kennedy. Gordon tells him to stop, telling him to step back and knows it is awkward for him not to be in control. He reminds Joe Jr. that all he can do is be supportive of Kennedy.

Gordon is proud that Kennedy hung in there and tells her to keep in touch. His job is done and he is out of there. He reminds Melanie and Joe Jr to stick it out as they are back to where they need to be. He says tonight brought Shanty the 19th is back in its element. He continues to praise Kennedy for being such a great cook; this was a hard one but definitely the most rewarding.

3 months later, Joe and Melanie admit they were grateful for the second chance and things are continuing to go well.