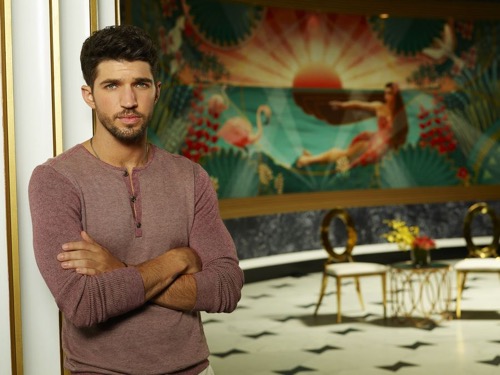 Tonight on ABC, Grand Hotel airs with an all-new episode Monday, June 24, 2019 season 1 episode 2 Grand Hotel recap called, “Smokeshow.” On tonight’s Grand Hotel season 1 episode 2 as per the CBS synopsis, “Gigi tries to save the hotel after El Rey’s performance gets out of control; Danny’s cover is blown by one of the hotel staffers; Ingrid’s deception forces Javi to step up and take responsibility for his actions.”

Tonight’s episode of Grand Hotel looks like it is going to be great and you won’t want to miss it, so be sure to tune in for our live Grand Hotel recap at 10:00 PM ET! While you wait for our recap hit the comments and make sure to check out all our television recaps, videos, spoilers & more, here!

Skye calls her brother Danny, telling him she loves him. She is upset about something.

Danny asks Jason in the locker room about the girl who went missing. Jason’s mother comes in and tells them to get to work.

Danny runs into Alicia. He compliments her, making her blush. Meanwhile, Santiago tells Gigi he thinks he has a plan to keep the hotel. She wants to hear more. They hear loud music start. It is ElRay, the rapper. Santiago calls him and complains. He is going to kick him out.

Javi asks Ingrid how she got pregnant. He always uses protection. He also doesn’t remember anything about their time together. She tells him she isn’t looking for him to be a dad, just cover her expenses. He tells her he is pretty broke.

Santiago addresses the staff. He thinks they need to cut down on the amount of employees in each department. Alicia announces that she has talked to ElRay who agreed to be their resident artist. Santiago will give it some thought. Later, he tells Alicia that its a bad idea. They plan to evict him.

Mateo checks on Ingrid. She tells him not to worry, she took care of it. Santiago speaks with Mateo who says he can give him more time. He just needs $1 million. Santiago stops ElRay from leaving. He has a concert scheduled for Friday.

Danny notices Sky’s locker is empty. Jason sees him get upset when he thinks he is alone in the locker room.

Gigi and her daughter’s are shopping. The sisters are still fighting about ElRay. Meanwhile, Ingrid gets fired for sleeping on a guests’ bed.

Danny gets two employees to fight and then tells Mrs. P in the hopes he can steal her key card. It doesn’t work.

Ingrid runs to Javi for help keeping her job. He will try tp help. Gigi’s twins are still fighting. Gigi talks to Carolina about her attitude.

Carolina visits ElRay about her sister. Javi meets with Mateo about Ingrid. He tells her he got her pregnant.

Danny checks in on Alicia who is running around like crazy trying to get the concert ready. They flirt before she runs off.

The concert begins. ElRay hits the stage and the crowd goes wild. Helen asks Santiago why he is doing all of this and what kind of trouble he is in. Mateo confronts Ingrid. She tells him to step off. Danny steals Alicia’s access card. He gets access into a room just in time before she deactivates her card. ElRay dedicates a song to Yoli in front of everyone.

Danny goes through the office and finds a picture of his sister. On his way out Jason finds him. He confesses Sky is his sister. The fire alarms go off. It is from the fire works at the concert.

The next morning they get bad press. Alicia is devastated. Santiago comforts her. Gigi tells them to stop having a pity party. She addresses the reporters and gets them some positive press.

Danny and Jason talk. Jason understands. He heads to speak with his mother. She asks if he has anything to report on Danny but he tells her he has nothing on him.

Danny serves at family dinner to see Alicia. Yoli forgives Carolina who finds Danny hot. She runs off to get a better look at him. At dinner, Santiago makes Gigi VP of events. Alicia is upset.

Santiago gives Mateo a check for $1 million, giving him more time to save the hotel.