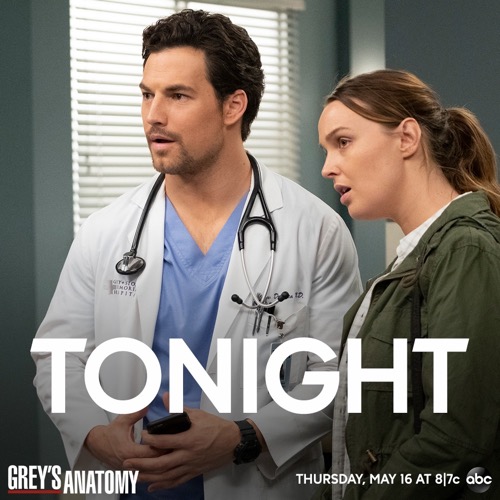 In the ambulance, Owen tends to the truck driver as he tells Schmitt to take the call. It is Dr. Webber, telling him they will be at the hospital in 7 minutes. Toby keeps pushing her mother to move, but Kari tells them they need to accept the twitch for what it was, the final spasm of a dying muscle. Kari tells Toby she loves her and squeezes her hand. Qadri is excited saying she has to go get Link and Sheppard. Outside, Jo and Bailey wait for the arrival of the first ambulance; Jo says she will talk to Bailey after all this trauma is over with. Owen hops out of the bus, explaining what is happening with driver then escorts Frances out, Jo is excited to have her there and is given permission to take her.

The squad car arrives as Amelia calls out for Bailey, they open the door as Owen realizes that Teddy is in labor. Teddy asks why he never felt it necessary to mention that he dated their OB. Amelia shouts that she is in labor and Teddy tells Owen not to touch her.

Alex and Meredith work hard to revive Gus, doing CPR. Meredith suggests that they call it but Alex refuses to stop until blood arrives as he feels Gus deserves to live and build towers of every building in the damn world and play t-ball in front of his parents who are good and kind and always been there for him. Meredith tells him she doesn’t want him to quit, she wants him to switch off for a minute. He feels he is alone as Meredith would trade places with DeLuca and Jo… He tells Meredith she is going to disappear and Jo already has; leaving him there all alone. Meredith orders him to switch as he is getting tired.

Jackson carries Maggie on his back, him wondering if she really knows what she likes since she was buried in books since birth and maybe she missed out on some aspects of life she could have loved; she calls Jackson patronizing and they are in this mess because Jackson missed out on the opportunity of consequences due to his privileged upbringing. She tells him this is what consequences feel like his car and mother’s money can’t save them and her patient. He is shocked she feels like that but she reminds him he missed out on life stuff while being Mr. Monopoly. She feels he doesn’t like her and she doesn’t respect him. He loves her but doesn’t like her the way she is, as he wants her to expand.

Owen tries to help Teddy get into bed, but she confronts him about having sex with Carina, who just happens to walk into the room at the same moment. Carina says it was an affair that meant very little to her and asks Teddy to open her legs; causing Teddy to roll her eyes. Meanwhile, Jo puts in the needle into Frances’ arm, telling her that she now gets cookies and juice. She wants to know how she will feel when her blood is gone, Jo tells her that she has 10 units of blood in her body and people can survive on 6 and believes she will feel better than fine as she is saving a little boy’s life. Frances says this has been the most terrifying day of her life, but after hearing all the sounds and screaming, she is unscathed and sipping the juice. There is something about walking through your worse fears as it is awfully freeing.

Bailey and Richard are busy with surgery, her complaining about how she gives her interns everything and this is what happens; Richard defends him saying DeLuca may not have known what he was doing, possibly being another explanation as DeLuca is smart and talented. Bailey has no sympathy because he put the Rivera family at risk of seeking asylum. He put everyone working in the hospital’s insurance policy. She is certain he didn’t alone, thinking Meredith participated and DeLuca is covering for her. She asks Richard if he knows something about it, but he defers the answer.

Link is on video with Tom as Amelia tells him to be quiet. Toby asks her mom to do it again, fighting for her since she has never gotten tired fighting for her. Kari is able to move her hands; Tom asks Kari to point to her and she is able to go it; everyone celebrating as Tom jokes that she wants him to sing now. She says he made her move her finger so he can sing whatever he wants; Amelia hangs up on him when he starts.

Jo rushes to the chamber, bringing in the bag of blood, he tells Meredith to squeeze the bag to make it go quicker but Jo worries they are too late. They work hard on Gus, finally getting rhythm back, Meredith says she will hang another bag in the OR as Gus begins to wake up. Alex tells him that his chest will hurt, explaining they are in a room that is like a space shuttle; Gus only wants to know where his Lego bricks are, making Alex laugh. Everyone leaves the chamber but Alex and Jo, she admits she is not okay; she loves him and apologizes to him. He says together they can talk to Bailey, but Richard interrupts them saying they need to talk about Meredith.

Nico finds Levi, saying he misses him. Schmitt knows he can be annoying but he spent the day with a woman who imagines the worst, right up until the part she was a hero. He knows he is a pretty great guy who cares about the world and if Nico loves him, he deserves better than what he has been giving him. Nico doesn’t think he is annoying but he gets jealous; ever since he killed his patient all he feels is anger. He just witnessed a medical miracle and still, all he feels is this anger and doesn’t know how Levi does what he does, but he wants to. Levi says he will show him.

Maggie gets the message that the donor arrived and Gus got his transfusion. Jackson says they are in fog as Maggie says they cannot drive in this. He wants to go check out the situation, saying she can stay in the car safe and sound while he goes to find out what is happening in the next 10 minutes.

Tcarina tells her the baby’s head is out, counting down before the final push. Owen says he is in love with Teddy and has been since the day he met her but he was afraid the way he feels about her is not safe because it feels so good. He understands and tells Teddy he will spend the rest of his life proving he is worthy of her love if she lets him; she can’t answer as she pushes for the last time.

Meredith tells Bailey and Catherine that DeLuca has no idea what was going on, she will go on record and accepts responsibility for her behavior. Richard and Alex walk in, saying they need to hear what they have to say. Richard says it was him and then Alex says he forged it; Bailey tells them this is not a game, this is criminal behavior. Richard said it was all of them, but Catherine is shocked Richard is a part of this. He knows it was emotional and a wrong decision but they couldn’t see that family suffer anymore. When Bailey is asked, she tells them they are all fired! Richard turns to Catherine, who is frustrated.

Maggie sits in the car in silence. Gus is playing his video games as Frances stands with his mother watching peacefully. Alex holds his jacket before walking away. Teddy pushes out a healthy baby girl, and Owen gets to cut the cord. Carina asks what her name is and Owen says, “Alison”. Tom is busy setting up the nursery, bottles, and stroller, quite impressed with himself. Meredith sits with her children, saying she is going away for a little while to take care of something very important but promises to be back as Maggie, Amelia and Alex watch over them.

Owen holds their little girl, celebrating with Teddy as Amelia looks from the window; Link joins her. She tells him he is pretty wonderful but she jumped into him really fast from Owen and the life she thought she was building. Link knows he was a rebound but she isn’t sure if he still is, open to possibilities if he doesn’t need her to decide anything right now. She needs time to figure out who she is outside of Owen and he agrees.

Levi and Nico watch “My Girl” as Levi’s mom brings him some soup, introducing her to his boyfriend, Nico and he is the one who had the tough week. She says she will talk to him later, asking Nico if he likes chicken soup; she takes the tray and gives it to Nico. When his mother goes upstairs, Nico cries and tells Levi he is amazing, together they cuddle to the movie with Nico finally breaking down.

Alex and Jo kiss outside, when Bailey comes out to have her check into in-patient psychiatry. Alex is reassured by Bailey, saying she will be okay as she is depressed it is scary and hard but it is treatable. Alex asks if he is really fired. Bailey tells him she hates this more than he does. Meredith goes to see DeLuca who is in jail, saying what he did was so stupid as his career won’t survive this. He doesn’t think turning her in was noble. She tells him if they are going to be together he needs to develop some instincts for self-preservation. She advises him to let her clean up her own messes and she stands by what she did. She has to turn herself in to get him out of there and as much as this terrifies her – she loves him too!

Maggie steps out of the car, hobbling along, calling out for Jackson.