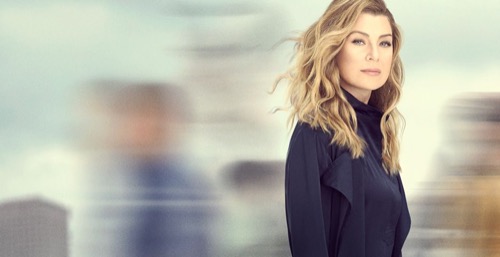 Jackson helps a man in a dangerous situation, as his relationship with Maggie comes to a new crossroad. Meanwhile, Tom gets new responsibilities at the hospital that throw the doctors for a loop.”

Grey’s Anatomy begins tonight with Dr. Jo Karev (Camilla Luddington), Dr. Meredith Grey (Ellen Pompeo) and Dr. Andrew DeLuca (Giacomo Gianniotti) all face the consequences of the insurance fraud they committed while Dr. Maggie Pierce (Kelly McCreary) waits for help to arrive for Dr. Jackson Avery (Jesse Williams), who is holding on for dear life os another hiker who is hanging over a ledge. They are able to pull him up when more help arrives.

Dr. Ricahrd Webber (James Pickens Jr.) is in his AA meeting as Meredith tells the lawyer everything; she tells Meredith to go home and Andrew will be let out after they schedule a hearing and the charges are dismissed. She will get a few weeks of community service and it will be up the medical review board if they allow her to come back. Dr. Alex Karev (Justin Chambers) is having a beer with Dr. Atticus Lincoln (Chris Carmack) who reminds him that Jo will get better; he thinks Dr. Amelia Shepherd (Caterina Scorsone) dumped him but he can’t really tell.

Meanwhile, Amelia brings the brother, Leo to Dr. Owen Hunt (Kevin McKidd) and Dr. Teddy Altman (Kim Raver), so he can meet his little sister, Alison. Dr. Miranda Bailey (Chandra Wilson) congratulates them but calls all of them into work, except Altman who obviously just had the baby. Suddenly Dr. Thomas Koracick (Greg Germann)walks in and spots what is going on and helps her out, holding Leo, saying she will regret this but in the meantime, they are friends and will help her. She is grateful for the help.

Miranda takes the other doctors out to help with the traumas, only to see that the other two passengers in the ambulance are Jackson and Maggie, who claim to be just fine.

Once back in the hospital, Link is able to save the hiker’s leg and his girlfriend praises him and that Dr. Avery was the warrior, but he says the girlfriend was the warrior; but today is her day for nerve repair. Alex drives Jo to the prison where he can say goodbye, he is to say goodbye, he is to drive off and she goes in on foot. Alex says she is way saner, and has 30 days there and he can visit her on Saturdays. She tells him that he has an out and she loves him enough to have an out. She takes her bag without even kissing him.

Bailey walks through the hospital, observing Katherine and Thomas going into a private office. Meanwhile, the staff performs the surgery on the nerve damage on the hiking wife and it is clear that Link and Amelia have issues. She doesn’t want to get buried in him, she wants to go on dates with him and get to know him better before she ends up going all in and getting lost in him.

Teddy is losing her mind as the baby won’t stop crying and won’t go back to the home that was meant for Owen and Amelia. She says her soul needs a shower and the baby needs a diaper change. Dr. Webber arrives after begin called from the health app, introduced to a child named Lolly who ends up vomiting all over him, he suggests she has the flu.

Maggie preps for surgery as Jackson reveals Shepherd was able to repair all of Marty’s nerves and John is also improving. Her ankle is a little better but he wants to know how they were doing, and it has been a week. He left her in a car on an unfamiliar road in the woods. She suggests they still need to wait to talk and go their separate to talk.

Grey is on trial for the insurance fraud. She says the little girl needs to have hundreds of thousands of care and feels the broken system should have supported them. Her lawyer pleads that she has 3 little children and to not throw her in jail. Back at the hospital, John won’t wake up.

Catherine and Bailey are fighting behind the closed doors because Richard is working for a medical app; standing by her has cost her her marriage to Richard. She walks out and finds DeLuca outside the door and he reveals he has been cleared of all his charges. Bailey says he is cocky but needs to get to work.

Meredith is learning from her fellow garbage pickers about their medical conditions and they ask if she will help her. Jackson and Maggie are looking at John’s condition, he is now on life support, making Jackson wonder if she should have just let him go as there is something inside of him that is beyond r4epair. Maggie wants to know if she is the metaphor in this thing that is beyond repair.

Jackson and Maggie are still broken up, as she is okay with it because she is tired of being abandoned by someone who wanders off into the trees. Andres jokes that they are more like siblings since their parents are married. Dr. Levi Schmitt (Jake Borelli) is supposed to be in John’s room when Dr. Nico Kim (Alex Landi) asks why he isn’t in there; causing him to admit it hurts him that he was once a miracle and now he isn’t.

Owen comes in, looking for Teddy, who panics and sometimes brings the baby to the hospital as she doesn’t trust Owen; she encourages him to be patient until she learns that he offered to “milk” Teddy who was in pain and had a clogged milk duct. Amelia smirks and goes into the elevator. Richard goes on job applications/interviews but people are more concerned with him looking into retiring any time soon.

Jackson comes out and thanks Victoria Hughes (Barrett Doss) for saving his patients, inviting her out for burgers at Joe’s some other time. Meanwhile, Jo and Alex attend counseling with their therapist (Debra Jo Rupp) as Jo feels she lost the ability to receive the love he was offering and pushed him away. She is afraid to not regain his trust. He felt fear when she shut down.

Amelia and Link question each other about what they truly want to do but have never done and it suddenly dawns on them that their patient might have a rash and he is recoverable. He has the rash and they are hopeful!

Jackson sits with Victoria, sharing how they got to save John; hoping he wakes up and happy that she gets to know how he is doing since no one never tells them the final outcome. They both admit that they are getting out of a long term relationship with people they deeply loved, so probably not the best time for a new relationship as they should probably both feel miserable for as long as they should. Susie recognizes Meredith outside doing her court-ordered work; Meredith pretends it is volunteer work but quickly gets caught when the officer says get back to work before she charges her with contempt.

Miranda walks into her office and finds Teddy breastfeeding there, saying she hates maternity leave.; revealing that Owen offered to “milk” her. She has a brilliant mind and came to work because she needs to use it. She fired all her favorite people and her least favorite person has the most power over her. Teddy feels she is a terrible mother as does Miranda but she is an excellent mother.

Richard comes to see Alex, explaining about his job interview but feels he won’t get the job as the woman doing the hiring practically called him grandpa. Alex says Jo is out of town and he doesn’t know if she is coming back. He lectures Alex about drowning in his own filth, advising him if he is worried about his marriage he needs to give his wife a reason to come back home. John’s wife, Mara doesn’t want them to continue but Andrew tells her this is not the time to give up but he will tell her when the time is right.

Today,
They thanks Mara for coming both Andrew and Jackson listen as she tells them she found a nice longterm facility for him to be in; but they bring her in his room and he is awake, moving but weak and fragile. She hugs both the doctors as he is able to tell her that he loves her.

Jo walks out of the facility and Alex is there in a suit, not wanting an out. He is a better man with her. He wants to be her husband and her to be his wife. She has done the work there but she is not magically fixed and can’t promise it won’t happen again. He wants to go home with her as his wife. He asks her to marry him again and she says yes.

Owen comes home, telling Teddy that he listed the house; they are moving to the suite upstairs. Leo is with his mom tonight and he loves Teddy. He asks her to let him help. She hugs him and thanks him for listing the house. Amelia comes to see Carina Deluca (Sefabua Spampinato).