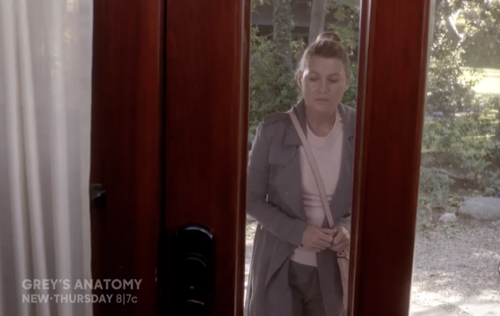 Grey’s Anatomy begins tonight with Teddy (Kim Raver) finding Tom (Greg Germann) practicing surgery on the “Operation” game and she suggests if anyone sees him doing that, they may go to a new hospital. Tom feels Catherine (Debbie Allen) is ready but he isn’t; Teddy says him and Amelia are going to do great. Meredith (Ellen Pompeo) brings Richard (James Pickens Jr.) some coffee but he insists he is fine. She presses as it is going to be a long day. Richard reminds her that he has plenty of people to look out for him, but her father, Thatcher (Jeff Perry) doesn’t and the time to change that is now.

Richard arrives and kisses Catherine, sorry that he missed her scans. Jackson (Jesse Williams) brings in his daughter to see her grandmother. Amelia (Caterina Scorsone) bring in the computer to show them all what their plan is for the procedure; they remind Jackson and Richard that they are the surgeons and have this all. Catherine says she is “good” but wants to take a little walk alone before they get started.

Meredith makes the trek to go see Thatcher and Philip (Michael James Lazar) answers the door. He wakes up Thatcher, who is frail but thrilled to see her. He is not on any pain meds, simply oxygen. Philip leaves the two of them alone, saying his number is on the fridge and to just give him a call. Thatcher says there is so much to say but he doesn’t know what to say. Meredith asks if it is okay to simply sit together and they do.

Catherine walks into the OR, where Jackson finds her. She tells him about being in this exact room and being the surgeon for the first time. In order to get out of her terrified state, she sang “Ain’t No Mountain High Enough” from Diana Ross; she’s used it for everything that scared her. They share some tender moments, even admitting she snuck into the gallery to watch his first surgery. Catherine gives him papers showing that she left the Foundation in Jackson’s name, but he wants her to keep it until she makes him read just how detailed she planned everything. He escorts her out of the room.

Thatcher feels all the paintings are a painful memory. He talks about being in Zimbabwe and coming home was the right thing to do. She is glad he had a whole new life and stayed sober, but he didn’t give a damn about the people he left behind.

Amelia and Tom rehearse what they are about to do on Catherine, both stoppings pretending to be confident but Tom isn’t feeling it. Amelia does her word bomb thing to see if it helps. He admits if he loses Catherine… He’s lost enough. Amelia stands tall and Tom does too, with their hands on their hips saying, “Let’s keep her alive!” In the OR, Catherine continues to boss everyone around which they expect. Richard and Tom banter between each other, but give Catherine and Richard a moment of privacy. Jackson returns with Diana Ross’ song, dances with his mom, Richard and the entire surgical staff. Catherine laughs, dancing and sings, extremely happy.

Tom sings his own music as the entire gallery is packed. Jackson doesn’t want to sit down nor leave as Maggie (Kelly McCreary) tries to get them to take a break while she stays and watches.

Meredith admits to Thatcher she is mad that he ran away after she gave him a piece of his liver he promised they would try. She is shocked to learn that he came to Derek’s funeral but he talks about how she looked exactly like him, a ghost when he lost his wife. She helps him to bed when he can’t breathe, after a couple puffs of oxygen he removes his mask and tells her he came home for her!

The surgery seems to be going well until something gets stuck. Richard tells Jackson to sit, as he says he hates Tom, who keeps bopping and singing; Jackson goes for a walk as Richard tells Maggie that he doesn’t need to ask Catherine where she wants him to be because he is already there. Miranda Bailey (Chandra Wilson) sits with Richard, saying she knows he shouldn’t be there, but it is not her place to say anything.

Tom stops the music and informs Amelia they need to flip Catherine and come in through the front; Amelia is firmly against this until he asks her what she would want. Amelia leans in and tells him, “For the record, I do not like you!”

Maggie finds Jackson, who is scared because his mom has always been larger than life, laughs harder, yells louder and the life of the party. Jackson says she has always exerted herself in his life, whether he knew about it or not and now he can’t imagine a room would feel like without her in it. He cries at how it was different losing Samuel, it was like his world was collapsing around him but this makes him feel like a scared little kid. Maggie tears up, as he doesn’t like that the world has been turned upside down.

They close the incision on Catherine’s spine and flip her over, with only Richard and Miranda watching from the gallery now. Richard needs to be held when he sees them secure her head. Amelia gets Tom going, as she challenges him, so he is no longer looking directly into Catherine’s face and getting emotional.

Thatcher tried to call Meredith after the funeral as he was only checking in on her, but that is how he and Richard began talking. He thanks Meredith, who gave him precious time when she gave him a piece of her liver. She jokes that it was time for him to get his own head out of his ass. They laugh, but Thatcher says he had his own, miserable, painful life because of her and wished she could have joined it. He admits he misses Lexie, apologizing that Meredith lost her; knowing how much she wanted a sister. Meredith says she has a sister, named Maggie, who is the best of Ellis and Richard. Thatcher is shocked to learn they had a baby together, but at least something good came from all of that.

Tom jokes about seeing Amelia in heels instead of standing on the stool. They are now risking paralysis; Richard comes up with an idea, telling them to remove the tumor in pieces and then use the pen he created; it hasn’t been approved yet but it does work. Tom, again, says he has always liked Richard, who once again tells him that he didn’t. Richard takes off to get the pen.

Meredith and Thatcher talk about old times with Ellis. Meredith wants to know if he regretted marrying Ellis. He talks of when Ellis was pregnant with Meredith, the entire pregnancy she said she was just getting fat and not pregnant; suddenly 9 months later when her water broke, she burst out laughing saying, “We are having a baby, Thatch!” and laughed the entire time to the hospital. For that reason alone, he would marry her all over again.

Tom is getting antsy as Amelia holds her composure. The signal is failing again and they are losing feeling in her arm. Amelia orders the staff to stop telling them about the motor function failing as they know they will lose it all. Richard looks down into the OR concerned.

Meredith feeds Thatcher, who tells her in the closet there are things for her kids in there. He wants her to know he always thought of them. Meredith holds his face with her cold hands, talking about Zola, Bailey, and Ellis. She says they are exhausting and amazing; wishing he got to know them too because they are so, so beautiful. He finally closes her eyes and she holds his hands as her eyes fill with tears.

Catherine wakes up and her reflexes are normal. Jackson says she is most definitely not dead, but she blurts out that she thought it was going to kill her. Amelia tells her they were able to remove 95% of the tumor but had to leave one nodule behind. Tom admits that even with treatment, she will have to live with cancer. Catherine says she can live with this for many years, telling Amelia not to be sorry for giving her life. Tom and Amelia have given her her life back; pulling off a miracle and they are worth celebrating; except it will have to wait a few months for her to get on the dancefloor.

In the elevator, Tom runs into Teddy, who congratulates him. She feels he should be really proud as a lot of surgeons couldn’t do that. She offers to take him out for a drink, which he takes a rain check for because when they do go out, he wants to smell good.

When it comes to medicine, who is to say who is winning and who is losing. There is just as much value in trying again as in letting go. Tom sits in the chapel, saying he was able to save his friend, even though he wasn’t sure he could, but his friend was a bit of a badass.

Maggie sits with Jackson at Catherine’s side while Amelia sits in a meeting talking about the surgery and how it made her feel. She talks about spending most of her life, chasing the high she is feeling right now. She is so incredibly grateful to be sober and present enough to feel every moment – perfect or not!

Meredith brings home all the things Thatcher saved for the kids. Zola asks her mom if she is okay as Meredith assures her she will be fine!