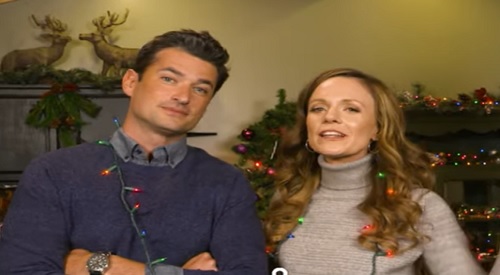 Hallmark Channel news has some great information to pass on about an upcoming holiday movie that’s part of The Hallmark Channel’s Seven Night Thanksgiving Movie Event. Fans of romantic holiday movies are being treated to a new movie premiere each night during the week of Thanksgiving. The movie you won’t want to miss on Tuesday, November 26th is called “Check Inn To Christmas.”

The movie is about two people who fall in love despite their families being embroiled in a long-standing rivalry. New York City lawyer Julia returns to her Rocky Mountain hometown and her family’s inn for the holidays, and she finds herself at the center of a generations-long feud with the family that runs the town’s other competing inn.

Julia then finds herself falling in love with her old childhood friend Ryan, whose family owns the inn that is her family’s big competitor. And while Julia and Ryan don’t have a problem with the historical rivalry between the inns, their families do, so there’s a bit of a Romeo & Juliet element to the movie.

The movie stars Rachel Boston in the lead role of Julia. You might recognize Rachel from he roles in various TV series such as American Dreams, The Ex List, and In Plain Sight. In addition, Wes Brown stars in the lead role of Ryan. Wes is best known for his roles in the TV series True Blood, Deception, and 90210.

The movie also stars Richard Kern in the role of Tim, Julia’s father and inn keeper. Richard propelled to fame years ago in the role of Al on Home Improvement. He also appears on Last Man Standing and has served as host of Family Feud.

In a touching turn of events, Rachel Boston’s 101-year-old grandmother has a small role in the movie. Her grandmother plays a resident of the Rocky Mountain town where the movie takes place. “That is going to be a highlight of the movie for me,” Rachel said in the behind-the-scenes feature for the film.

And about Rachel herself, her co-star Wes Brown had nothing but praise: “Rachel is an absolute Hallmark favorite and she’s a wonderful actress and a great person, and that’s what keeps our chemistry really alive.”

And of the movie’s main message, Rachel said: “The message of this film is letting go of the past…and romance.” It certainly sounds like a great story with all the right elements for a perfect Christmas romance!