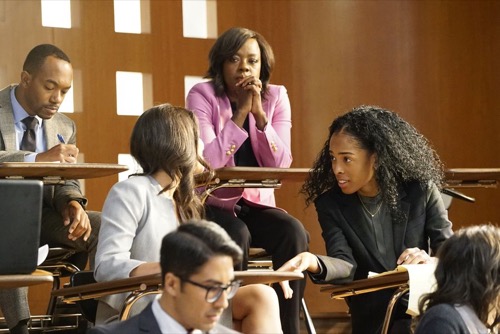 Tonight on ABC their hit drama How To Get Away With Murder (HTGAWM)  airs with an all-new Thursday, October 10, 2019, episode and we have you How To Get Away With Murder recap below!  On tonight’s HTGAWM season 6 episode 3, “Do You Think I’m a Bad Man?” as per the ABC synopsis “It’s the final semester of law school for Annalise’s students, but an FBI investigation looms over them.”

Michaela guilt-tripped Annalise. Annalise would never have given Michaela the lead on a case otherwise and so Michaela was milking her father’s death. She did it in order to be a professor for a day. Michaela got to come in and introduce the case. The case involved a young woman by the name of Brandi Greene. She and her husband stole five thousand dollars, but when the cops were closing in, they tried to surrender and were instead fired upon. Brandi’s husband died and she was clutching his dead body when the police arrested her.

However, the police were now charging Brandi with a whole list of crimes. They claimed she resisted arrest and they wanted restitution. In other words, they wanted her to pay for everything. They even thought it was reasonable to force her to pay for the officer’s therapy sessions. They were charging with so many offenses that it was ridiculous. The law clinic thought so as well because one by one they were able to work through the charges. They tried to show Michaela that they should act as her second and she played them until the very last moment.

Michaela was never going to use any of them as a second. She wanted to hog the glory to herself and she did just that. Michaela went into that courtroom ready to prove herself. She went extra hard at the ADA because she wanted the restitution charge dropped and he retaliated by adding a charge. He wanted to charge Brandi with Felony Murder. Brandi had blamed Michaela for it because she thought Michaela angered ADA unnecessarily, but Annalise promised they would fix this and then she disappeared.

Annalise met Gabriel’s mother. She spoke to the other woman about the baby she lost because Gabriel’s mom was trying to compare their situations and all it did was cause Annalise to spiral. Annalise took out all the frustration she felt at Sam out on her furniture. Annalise hated how much her late husband shared with his mistress and she was having a moment while everyone else was trying to deal with Brandi’s new reality. Michaela brought the clinic together because she wanted to bounce some ideas around.

Michaela was hoping they could all come up with a winning strategy together. She didn’t account for Tegan or how angry Tegan was when she found out Annalise wasn’t there. Tegan demanded that they find Annalise. She wanted Annalise running point on the case and she also wanted to know where in the hell was Connor. Connor, as it happens, was arranging a secret visit for Hector and Marisol. He was trying to help, but it may have made things worse. He took Hector over state lines and that was technically kidnapping.

Hector’s social worker promised to cover for him. Then there came pressure from the boss and all of sudden Connor was being reported. He was taken into custody. His clients, on the other hand, were detained by ICE. It was a really worst-case scenario with what he did and he had no idea how to explain it all to Tegan. The same Tegan that tore a strip off Annalise for her going MIA. Annalise had promised to make it up to her friend and she tried to do just that. She later spoke to the others about this latest charge.

Annalise wanted to hear their ideas. She even liked Gabriel’s suggestion that they put Brandi on the stand and for a while, that strategy worked. Brandi gave a heartfelt testimony. She talked about her love for her late husband and she also said it had been his idea to rob Check-N-Hurry. Brandi just wasn’t prepared for cross-examination. ADA Gibson pushed Brandi into losing her temper on the stand. Brandi was so angry that the judge decided to hold her in contempt and there went Brandi’s credibility.

Brandi was now seen as an angry black woman. Her defense needed to change this perception and Gabriel wanted to be the one to fix it. He blamed himself for what happened. He was trying to prove to Annalise that he deserved to be there and he blew his shot. Annalise had to take back the reigns on this case because she wanted to follow through with her original plan. She wanted Michaela to lead the charge and she gave Michaela the idea of how to win. She reminded Michaela that it would be as if she was defending herself in Sam’s death.

Michaela was upset at first, but then she realized how much Annalise was trying to help her and that’s what pushed her into creating a powerful argument for their client. She used the fact Brandi could sue the city for the wrongful death of her husband against the ADA. Michaela had forced them into offering her client a deal and that’s just what they did. They told Brandi she could have probation as long as she didn’t sue the city or she could take two years and still have the option of filing suit.

Brandi took the first option. She didn’t care about the possibility of money. She simply wanted to go home and put her life back together. So, Michaela put her client first. She accepted the ADA’s offer of probation and she patted herself on the back for a job well done. She didn’t know that her compelling defense of Brandi would spur Gabriel’s mother into finding the truth. Ms. Maddox suspected that Michaela had something to do with Sam’s death and she tried to tell Gabriel this. And that’s when Gabriel revealed all that happened to him.

He confessed to his own crimes. He told his mother everything and it got her to back off. She wasn’t pushing him anymore to come home. She also wasn’t going to assist the feds anymore once she found out that they were willing to frame her son just to make a case against Annalise. But the feds weren’t done. They reached out to Nate and they tried to apply pressure on him. They probably thought he would be desperate to get justice for his father and so it was a good thing they didn’t know Bonnie was helping him.

Bonnie was literally helping everyone. She stepped in with Connor’s situation and she worked with Tegan into getting both Marisol and Hector freed. Bonnie had been so good at helping that Tegan even offered her a job. She knew that Bonnie was fired from the District Attorney’s office and she saw for herself how well Bonnie can handle herself under pressure. And so Bonnie was doing something useful while Frank was still hunting down clues on wherever Laurel was.

And as always, glimpses of the future remain too vague for everyone.