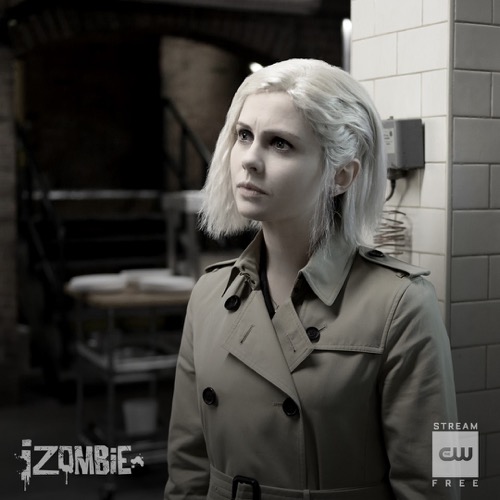 Tonight on the CW iZombie airs with an all-new Thursday, July 10, 2019, season 5 episode 10 called “Night and the Zombie City” and we have your weekly iZombie recap below. On tonight’s season 5 episode 10 as per the CW, “While investigating the murder of private eye Mick Chisel, who was stabbed in the head with an ice pick, Liv (Rose McIver) consumes Chisel’s brain in hopes of breaking down how this gruesome murder took place.”

With zombies on a rampage, officials sit to discuss a plan and options. They decide to reconvene for a final vote in 2 days.

Liv arrives at work to see all of the bodies. Ravi tells her they found Beanpole Bob. She heads right to his house and asks him for the formula. He did turn her after all. He doesn’t have it, he was high back then. She gets a call and leaves.

Ravi and Liv are called to a murder scene. Frank Chisel, a PI, has been killed. Clive needs to track down a female, who is a person of interest. She found the body. Liv cooks up Chisel’s brains and shows up at the integration after Clive finds their person. It looks like a woman named Bunny La Fonda is their killer. Later, they get the call that she is dead.

They head to see bunny’s body at the club. It looks like she died before Chisel. Blaine and Donnie are upset because of the hassle.

Back at the morgue, Ravi records notes as he looks over Bunny. Beanpole Bob shows up. They discuss Ravi’s cure and Utopia. Bob wants to help and try and piece it back together.

Ravi tells Liv about him and Bob’s talk at Peyton’s. Liv leads to work the case after sharing that maybe Bob has another angle. Meanwhile, Jane Harland shows up to see Blaine. She pulls a gun on him. He wants to know why she came back after killing the PI and Bunny. She saw an opportunity. He takes the gun from her.

Liv arrives to see Clive. It’s late and he is headed home. Liv wants to search for Chisel’s office. He tells her tomorrow.

Liv isn’t waiting for a warrant. She heads out on her own. She finds Chisel’s client list when Blaine shows up. The police show up. They let her go.

Major is packing up in the locker room when a janitor he has never see shows up. The man has 2 key cards. Major questions him and then tells him he has to come with him. The man runs into a hook in the wall, piercing his brain.

Clive and Liv question Blaine. Liv gets too aggressive and gets kicked off the case by Clive. Meanwhile, Major goes over Crawford’s info with his team. He was hired by Enzo. Who gave him his key cards? Major wants to know who else is pulling the strings.

Liv goes through files, discovering that Bunny’s dad hired Chisel to find her. She cannot figure out how Jane fits in this. Liv thinks she might know – Jane was stashing a cure. She grabs her coat to go to Donnie’s. Peyton follows. She just wants to have a drink and a good time.

At the club, Blaine and Liv look for the stash. They end up out back battling it out. Clive and his men show up. Blaine declares that Crybaby killed her.

At the meeting, the chairwoman votes down controlling the zombies with brutal punishment.

Donnie gets down on one knee to propose to Darcy. She says yes.

Ravi and Liv arrive home to see Peyton and Major. Major tells them about the janitor who was trying to steal Max Rager. Ravi pulls Liv aside. He spoke about Max with Bob. They head to Bob’s knowing he will be gone. Behind a door, they discover a lab with Utopian. Just then someone comes home. They look for a way out and discover imprisoned zombies.