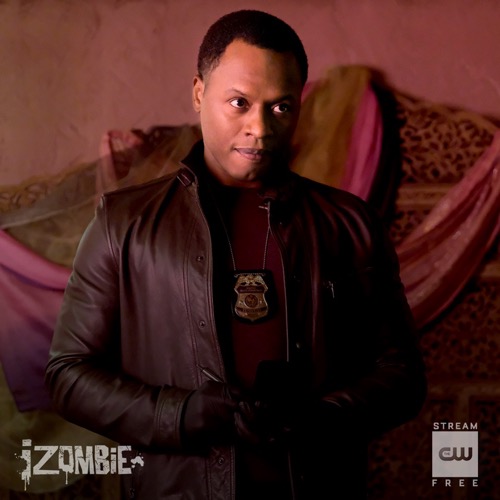 Tonight on the CW iZombie airs with an all-new Thursday, July 10, 2019, season 5 episode 11 called “Killer Queen” and we have your weekly iZombie recap below. On tonight’s season 5 episode 11 as per the CW, “Liv and Clive investigate the death of an old-school drag queen which leads Liv to eat and shift into the queen’s brain. Meanwhile, Ravi reaches out to Major with an interesting request.”

Liv and Ravi ran into some zombies that have gone full Romero. The zombies weren’t recognizable and oddly they were super calm. They didn’t even react when they saw Liv and Ravi, but that proved to be a blessing when the two heard some people coming. They needed a place to hide and hiding with the Romero zombies gave them time. They went in the zombies’ cage and they later found a window. The two of them escaped thanks to that window. They were just so relieved to have gotten away without anyone seeing their faces that they didn’t get to hear Martin had to say. He figured out someone had broken in and that several of his items were missing. And so what’s going to happen when Ravi comes up with a new cure.

Martin didn’t seem like he was dumb. Therefore, he was bound to realize what happened and so Ravi, as well as Liv, were living on borrowed time because who knows what her dad will do to keep his revolution. This man believes that zombies should be on top of the food chain. There was nothing he wasn’t willing to do to carry such a dream so it has to be repeated once again. Ravi and Liv should have been more careful. The two of them didn’t even realize their mistake and they were so pleased with themselves that they went directly to the lab. Ravi was intent on creating a cure without the death of the Freylich kids and Liv was more caught up in her crime-fighting. She ate the brain of a recently dead drag queen whose real name was Michael Stansfield.

Or Mike as he likes to be called. Mike works and stars in his own drag show at a local club. The club was managed by Mike’s ex-husband and Howard Denning wasn’t the type to kill his ex. If anything, he seemed more afraid of his own shadow. He did, however, point Clive and Liv to someone who would have information. Gary was another drag queen and he knew Mike from the early days. They were doing pretty well in the business and everyone was fine before the newbie showed up. The newbie was a zombie with her own show and she wanted to take over the business. She had her own promoter apply pressure on Mike to sell and she referred to Mike and Gary as has-beens that they didn’t know what they were doing.

She was rude when there was no reason to be! Bitchcraft lived up to her name and she was just as insensitive as Gary described. She didn’t care that Mike was dead. She was just happy to still go onstage and so Clive and Liv got plenty of answers out of her. Bitchcraft cared only for herself. She wanted to use Mike’s death as an opportunity to finally buy the club and she called her own form of drag as the way of the future. She said that Mike didn’t understand that when she tried to explain to him. Bitchcraft also painted everyone as the villains getting in her way because they were jealous. It was quite an arrogant boast from a suspect and it didn’t really put her in the best light now did it. Bitchcraft basically incriminated herself the longer she talked.

Its why Clive and Liv stayed on at the club. They watched her show and they heard from the older drag queens that she left a mess in her wake. Bitchcraft likes to glue her rhinestones. The older drag queens would normally sew their ones on and they didn’t need someone cleaning up after them. This piece of tidbit was important to Liv because she realized something. She remembered that the rhinestones found at the scene of the crime were glued on and weren’t sown. Liv told Clive her suspicions and so he brought in Bitchcraft. Bitchcraft took one look at the rhinestones at the scene and she said they weren’t hers. She believed it belonged to one the hags. The Hags were Bitchcraft’s fans.

The fans would try to impersonate Bitchcraft’s look and most of them would fall short. Bitchcraft was able to identify them from photos at the club. She showed Clive and Liv the ones that would never make it to the business and, as she was making catty comments, Liv had a vision. She saw the killer drop a Cher wig. She couldn’t tell from what era the impersonator was trying to copy and so she demanded photos of all the Cher(s) at the club. The officer that was helping was also able to be of help in another way. Jenkins said he saw a Cher impersonator come into the club and never leave. He figured the impersonator would still be there and so Clive and Liv went hunting for their Chef. They went down to the club and they ran into Gary.

The two had a few questions for Gary. Gary was the one that pointed to Bitchcraft and there was evidence planted at the scene that pointed to Bitchcraft. Only she wasn’t at the club. Her fans were and so that’s how Gary got a hold of the glued-on rhinestones. Gary also had a motive. He and Mike started up that club, but Mike was in talks to sell it to a developer that wanted to turn it into a parking lot. Gary hated the idea and he killed Mike to stop it. Clive arrested Gary for the murder of his friend and he was off doing paperwork as Liv was learning that her friend Graham was keeping secrets. A body into the morgue. He had pictures of himself with Graham and they looked close. It made Liv feel sorry for Graham so she later told him about it.

Not once did she question why the young man died. Not until she talked to Graham and saw how it was all connected. Graham was working with the extremists because they kidnapped his boyfriend and were threatening to kill him if Graham didn’t help zombies get out of the city. Graham admitted everything to Liv when he learned his boyfriend was dead. The extremists wanted to infect the world and so Liv called her dad. She begged Martin to stop what he was doing. Liv was even getting to him because he was changing his mind when his allies came in. They saw that Martin was wavering and so they killed him right in front of Liv. There was nothing Liv could do about it and, frankly, the city wasn’t safe.

There were friends that were really enemies and enemies that were willing to turn on their friends. Like Blaine killed Don E’s fiancée because he learned Don E was selling brains behind his back to Fillmore Graves. He only found out what his supposed friend was doing because he lost his Freylich kids. They had been rescued by Ravi and Major. And so in his desperation, Blaine checked his other holdings and found out the only one making cash was the one in Don E’s possession.