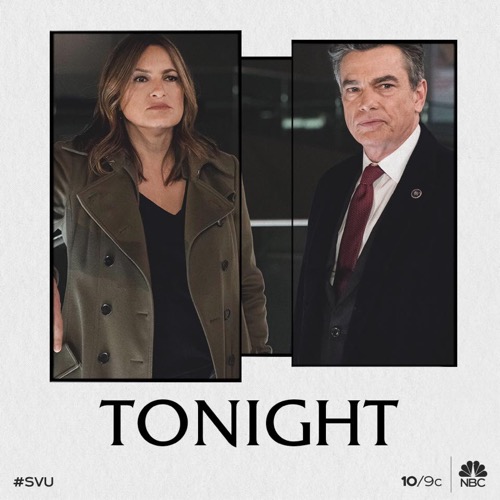 Tonight on NBC Law & Order SVU returns with an all-new Thursday, March 21, 2019, episode and we have your Law & Order SVU recap below. On tonight’s Law & Order SVU season, 20 episode 18 called “Blackout” as per the NBC synopsis, “Defense Attorney Nikki Staines is raped after a police charity event; and Benson reluctantly looks to her own for a suspect.”

Nikki Staines was a familiar face. She was a Defense Attorney known for being aggressive in court and she recently filed a lawsuit against the NYPD for their surveillance of activist groups, but then she was found in a stairwell unconscious and she later asked specifically for the Special Victims Unit because she believed she was raped and she believes that she was drugged as well. Which unfortunately turned out to be true. Her suspicions were correct and she was raped. Nikki said she didn’t know what happened after she ordered a drink at the police charity event. She was supposed to go to the event with her ex-husband and then they filed for divorce before that could happen. Nikki, therefore, went to this party alone where she was mistrusted by everyone she saw and she had a couple of drinks. And then she blacked out.

Nikki didn’t believe she would ever drink to such excess that she wouldn’t remember how she got home and so she also suspected that she had been drugged. She talked to the detectives and made sure that every available test was run on her, but the police didn’t find anything and they also thought that her claims of having her phone stolen might have been exaggerated. They all thought that Nikki had gotten so drunk that she decided to hook up with a stranger and had lost her phone. It was usual for SVU not to believe the victim and so they were only doing so now because it was Nikki Staines. She got a lot of the bad guys off a life sentence and still had the gall to sue them. As if they were the bad guys! There were a lot of angry cops out there that didn’t like Nikki and so no one on SVU had wanted therapist could be one of their own.

They first wanted to rule out any other suspects. They looked into Nikki’s clients and checked up on the sex offenders in the area, but Nikki was her own advocate in this case and she demanded that her case is treated fairly. She wanted them to start looking into people at the party and so they finally did. They checked security footage to see if Nikki left the party with anyone and they got nothing on any of the feeds or security cameras on the path to her apartment. It seems that whoever attacked her had gone out of their way to never be seen and that sounded like something a cop would know. So Lt. Benson had every reason to suspect a cop. She later went to the Chief for subpoenas of everyone at the party and he turned her down flat. He didn’t want to give Nikki or any defense attorney for that matter the means of coming at cops and so he told Benson to find her evidence elsewhere.

Benson tried to do just that when she went to see Rob Miller. Miller was the counsel the NYPD hired to take on the lawsuit from Nikki and so he has had to work with her in the past, but he was also at the party. Miller had been very charming to Rollins and Benson. He even asked out Benson when he saw her again and so Benson accepted the file that Miller handed to her because he said it was supposed to help. The file was what he had gathered on Nikki herself and it was basically a hit piece. It made out that Nikki was a habitual liar and Benson didn’t doubt it while Rollins did. She thought that Miller had been a little too smooth when they met because he picked out she was from in Georgia from her accent and it didn’t make any sense to her because she didn’t have an accent.

Rollins went looking into Miller once he handed over that file. She wanted to know what he had to gain and so she showed the file to Nikki. Nikki had been surprised to see a conversation she’s had with Judge Leonard included because it was a private conversation in his chambers and she never told anyone about it, but it seems he did. The judge was accused of plagiarizing a paperback college and it was all swept under the rug thanks to his friendship to Rob Miller. Miller made the accusation got away and Leonard went on to become a judge. A judge that owes Miller. Miller was known for being ruthless and untrustworthy. He fired a young man from his law office after they couldn’t find any dirt on Nikki and then he blackballed him. The young man was now working as a barista for his brother-in-law and he said that anyone that stood in Miller’s way was ruined.

Rollins took what she found to Benson and that was when Benson was getting ready for drinks with Miller, but Rollins didn’t need to worry. It turns out Benson suspected Miller as well and that she accepted drinks because she wanted dirt on him. He asked her to a bar he knew like the back of his hand and so he knew what Benson was up to when a bartender he didn’t recognize collected his glass. Miller confronted Benson with her false attempt at flirting and he instantly brought up Nikki. He claimed that the sex was consensual. Miller said that they had sex in his limo and that she had wanted to walk home afterward. Only it was consensual then why didn’t he mention it from before? Miller couldn’t answer that question and so he brought an abrupt end to their date. And Benson had her people to go talk to Nikki.

Rollins told Nikki about Miller and suddenly Nikki didn’t want to pursue the case. She said she was about to go through a custody battle with her ex and she couldn’t jeopardize that. Not even to get her own rapist! Miller had found something on her and she couldn’t fight him, but then he tried to come after Benson and had her arrested for a DUI even though she wasn’t drinking. She was arrested in front of her son and for that she wanted revenge. Benson went to Dodds with what they have as well as what they suspected and she convinced him to wear a wire. Dodds later met with Miller and he talked from bro to bro about how he needed to ditch the phone or the police could connect him to misconduct. And that’s how they got Rob Miller’s confession on tape.

Miller was going down and all his friends will let him sink because they were probably all tired of being blackmailed, but Nikki who should have been happy about getting justice had cried when she heard the news.

She doesn’t believe she’ll ever be the same again nor does she think she could even be a lawyer anymore now that she knows what she did to victims on the stand.