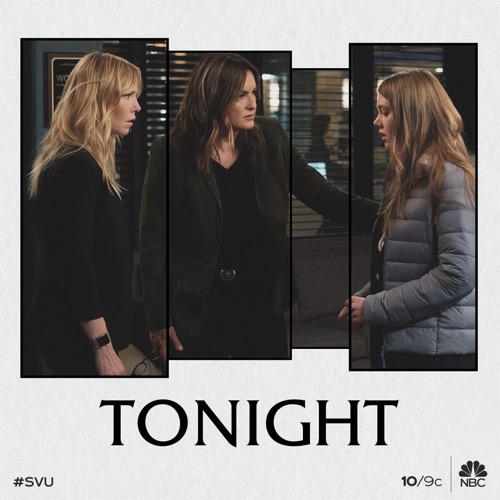 Tonight on NBC Law & Order SVU returns with an all-new Thursday, April 11, 2019, episode and we have your Law & Order SVU recap below. On tonight’s Law & Order SVU season 20 episode 20 as per the NBC synopsis, “Benson and the teamwork to uncover a pregnant teenager’s secret when she refuses to name the baby’s father.”

A woman is trying to meditate when she is interrupted by loud noises from her neighbors. She bangs on the wall while hearing screams by a woman. On the other side a stepfather and his stepdaughter fight. She wants her phone and when he won’t give it to her she becomes violent throwing things. The police arrive. There is blood and broken objects everywhere.

At the hospital, Carisi and Liv are brought in. Liv is told the 13-year-old Mackenzie is pregnant. Her mother died years ago and she now lives with her stepdad. Liv and Amanda talk to Mackenzie while Carisi talks with the stepfather Garrett. Mackenzie tells them that she met a man at Whole Foods and they had sex in his car. They ask her for more but she isn’t offering. She shares just the color of the car, blue. They feel like she is covering for an older man possibly.

The team gets to work visiting Mackenzie’s private school and interviewing several male peers. One boy makes a comment about her being a flirt and spending a lot of time with the drama teacher. They head to the drama department. They talk to Mr. Dreyfus who tells them he has a blue car. But he never touched that girl. They take him to the station.

At the station, he swears he didn’t touch her. He offers up his DNA. Liv talks to Stone who puts a motion on the calendar. Liv tells Amanda the good news and they get to talking about whether this is good for Mackenzie or not. She seems happy to be having a baby. Mackenzie shows up at the station. She tells them how she told her step dad that it was Mr. Dreyfus. Her stepdad took off angry. Liv and Amanda rush to locate him. They find him at Dreyfus’ apartment. They find the drama teacher dead with Garrett holding a trophy he used to strike him.

Back at the station Garrett is questioned and admits that he struck Dreyfus after he confronted him and smiled.

Stone is paid a visit by a man who tells him that Mackenzie is lying. He met Dreyfus at an LBGTQ meeting. Stone calls Liv to leave a message that something doesn’t seem right.

Liv is with Mackenzie at the store who is shopping. She plans to make dinner. Liv wants to know the truth about Dreyfus. And how it happened. Mackenzie shuts down.

Liv tells Stone that she thinks Mackenzie might be lying about something in order to protect Garrett. Later, they call her to the stand in court. Garrett’s lawyer blocks her from testifying sharing that the two are actually married. Stone is beside himself.

Liv and Carisi track down Mackenzie’s aunt after they learn Mackenzie’s biological father gave consent. They break the news to her of the marriage. She feels awful, Mackenzie should have been living with her.

Amanda tracks down Mackenzie’s real father. He admits he was bribed. They head back to court to fight the marriage being valid in New York since the father was bribed. The judge doesn’t care and grants it as legal.

Liv and the team start looking into when Mackenzie became pregnant. They have an idea. Later, they call Garrett and Mackenzie in with their lawyer. The tell them they will prosecute Mackenzie. They all go crazy. Garrett admits he killed Dreyfus after he found out Mackenzie shared their relationship with him. They make a deal and Garrett is taken away.

The next day, Liv sits with Mackenzie and tries to help her make sense of all of this and explain to her how she should have been a kid all of this time.