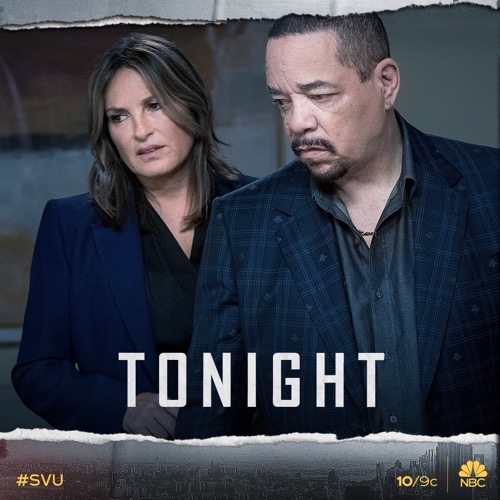 Tonight on NBC Law & Order SVU returns with an all-new Thursday, October 10, 2019 episode and we have your Law & Order SVU recap below.  On tonight’s Law & Order SVU season 21 episode 3 as per the NBC synopsis, “A serial predator targeting men in gay bars proves difficult to catch, until a celebrity comes forward with his story.”

Tonight on Law and order SVU, there’s a serial rapist assaulting the gay community in Hell’s Kitchen by tasing them after leaving gay bars. The predator is targeting black men on the down-low who don’t want to come out and Fin visits his son to urge him to speak to the LBGTQ community he works with but his son states he can’t do anything or force anyone to come out due to most of the down-low men having families.

A pop star named Mathis Brooks who is leaving the riding in the car with his team decides he wants to go for a walk he departs from his manager and brother, along the way he stops into a gay bar and is met with a disgruntled fan who wants to take a picture with him but Mathis doesn’t, he quickly leaves the club and as he is walking is attacked, he is discovered by two patrol NYPD officers under a scaffold and Mathis is leaning over with his pants down and blood on the floor pleading to the policemen to help him.

The team goes to interview Mathis’ manager and brother to try and find out why he was attacked and if he is an undercover gay. Liv and Fin speak to Mathis he doesn’t tell them that he stopped into a gay bar before he was attacked but does tell them he was just walking for air and denies he’s gay.

Rollins interviews and speak to the disgruntled fan who got into the fight with Mathis tells Rollins is undercover and that he wasn’t the one who attacked him and proves his alibi.

The police chief thinks that Mathis should speak on the assault, Liv and Fin go tell him and Mathis manager is against this but Mathis says he will go public about the attack. Mathis gives a televised speech and comes out on national TV, Ken who’s Fins son brings a man into the station who was attacked by the rapist and gives details about his attack.

Rollins goes to interview another victim, and so does Fin, it seems more and more victims are coming forward they make a connection, they decide to send the chief undercover to one of the bars to see if he’d be targeted and the suspect takes the bait, while the chief is sitting at the bar he approaches him and he asks about his wife at home looking down at the chiefs wedding ring, the chief gets up and says he has to get home and brushed off further engagement.

This seems to anger the suspect and he puts a beer bottle in his back pocket which is something he has used in every assault, the team notices and follows the chief and suspect and just as he’s about to tase the chief from behind Rollins and Fin apprehend him.

While in custody and interrogation they discover he has something against blacks and gays. Since the other three men did not see theri attacker they decide to bring in Mathis since he claimed to have seen the attacker, he seems uneasy at first but then says ok he will. When Mathis gets to the line up he seems confused and picks multiple line up numbers Rollins tells the ADA Carisi that Mathis asked her what number the perp would be.

The suspect Moran turns out to have an alibi the night Mathis was attacked ruling him out, and even tho he might be responsible for the other three attacks it’s already hit social media and people are saying Mathis has made up his attack since the attacker has an alibi and he couldn’t Id him in the line up, and they find out that Mathis brother brought a taser the same day of the attacks.

They bring Mathis in for questioning and he defends himself saying he would never make something like that up and says maybe there was a copycat, the team feels that Mathis heard about the attacks and copycatted the attacks. They interview his brother and he says Mathis asked him to get the taser as a measure of protection, they interviewed Mathis manager and it comes to light that TMZ was going to out Mathis before the attacks but Mathis stages the attack to get sympathy as a victim.

The ADA states that the judge plans to drop the case but Liv pushes to continue and speak to the other victims to try to get more information to convict Moran of the crimes, but because they are afraid to testify and not want to come out the closet makes it harder for the charges to stick. One of the victims comes into the precinct and tells them that he took a picture with Moran and had consensual intimate exchange with Moran the ADA goes to speak to him and gives him the option of him being sent to jail as a straight man who attacks gays or a gay man who attacks black gay men he takes the plea.

The chief wants to prosecute Mathis for lying but Fin and Liv talk him out of it, Fin goes to have a heart to heart for him to face his last and what has happened to him. Liv takes her son Noah to his first ballet dance class after he tells her that he is no longer interested in baseball because it’s boring, as he joins the class she sees the happiness in his face and they both smile lovingly at each other.