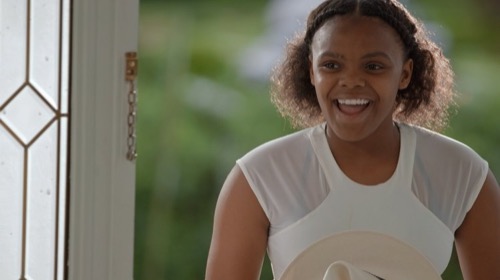 Tonight on VH1’s hit series Love & Hip Hop New York returns with an all-new Monday, January 21, 2019, episode and we have your Love & Hip Hop New York recap below for you.  On tonight’s season 9 episode 8, “Collateral Damage,” as per the VH1 synopsis, “After a judge rules Infinity can stay with Yandy while she goes through the process of becoming a legal foster parent, Yandy lays down ground rules for the teen.”

Yandy calls Infinity’s lawyer and requests an emergency hearing. They let Yandy take her home while she applies to be her foster mother. Back at home, Yandy tells Infinity about the house rules.

Joe meets with his therapist. He cries about Cyn and her moodiness. She has him call Cyn who shows up right away. Joe lets them talk alone. Cyn breaks down as soon as they are left alone. Cyn tells her about her postpartum depression. She explains she cannot get a nanny. When she was younger she was raped by a caregiver and now she doesn’t trust. They bring Joe back in. They come up with a game plan for therapy to get them all back on track.

Sidney and Jonathan meet up for a drink. She raps for him. He is a little taken aback. He tells her he knows who Nya is. She is actually his model for an upcoming make-up class he is having.

Rich meets with his mother to talk about his ex and the mother of his child. She shot her boyfriend in self-defense. His mother tells him he needs to talk to his daughter right away. And he needs to do it now. His ex could go to jail.

Yandy meets with Infinity’s birth mother. Yandy is told that Infinity is new to foster care, the opposite of what Infinity told her. Yandy doesn’t know what to think.

At Jonathan’s class, Sidney shows up late and in a dress, Nya gave her that she changed. Nya is insulted. Sidney gets fresh and bucks at her. Nya has to walk away before she does something bad. Jonathan has no idea what is happening but cannot believe Sidney is disrespecting her.

Yandy comes home to find out that Infinity got a call and took off. Suddenly Infinity shows up. She is mad that Yandy met with her mother. They talk about what Yandy learned. Infinity corrects her. None of what she learned is true. They hug and Yandy tells her to trust her.

Joe and Cyn meet with Remy and Papoose. Joe tells them about how Cyn blew him off on a night they planned to be together. Pap tells them his thoughts about being a couple and being married. Joe starts to think that engagement is not on the table.

Joe meets with his daughter Ashley and his ex Miracle. He talks to his ex on the side and yells at her that she has made a mess and it is not going to be all right. She cannot stick her head in the sand. They have a daughter who is going to be shattered if her mom goes to jail. They call their daughter in and tell her what could happen. Ashley cries. Rich cries. Miracle tells them it is not his fault.