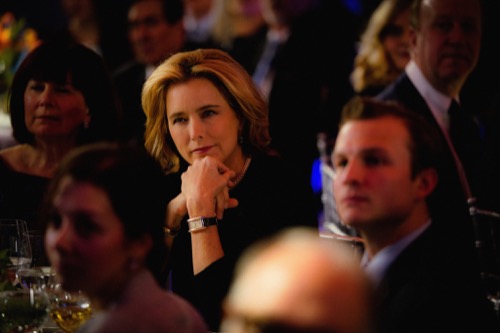 Also, First Gentleman Henry squirms after his appearance on “The Late Show With Stephen Colbert” results in heightened scrutiny of the romance in the First Couple’s marriage.”

Elizabeth McCord achieved her dream. She was now the first female President of the United States of America and she was doing her very best to carve out a bigger place for herself in place in history. She didn’t just want to be the first. She also wanted to accomplish several things within her first term and so that meant she had to play the game. The game as it is was the political maneuvering that the capital thrives on. Elizabeth was going to have to befriend her enemies and give them incentives if she wants her legislation to be passed amicably.

Elizabeth has to do this all the time. Its why she just wanted the one night off with her husband and to be there as he gave a speech at “The Arts and Creativity League”. Dr. Henry McCord was a great patron of the arts. He spoke about it with such passion that it was moving and it made everyone simply take the time to think. Henry was a great orator. His wife was proud of him for that and so she didn’t need Mike B. in her ear. Her acting Chief of Staff had wanted her to schmooze like every other day and so she had to fit into her night. She didn’t want to, but she did it and afterward, she went back to dancing with her man.

Elizabeth’s first term was going smoothly until she heard about the Iranians. The Iranians were accused of hacking her rival and revealing information that he fathered an illegitimate child with his mistress/staffer. This, of course, caused him to lose the election. No one likes a scandal when it came to choosing their President and depending on if this accusation was true or not it could cast doubt on the election itself. What if Elizabeth only won the election because of the hacking? She couldn’t live with herself if that was the case and so she asked the intelligence community to investigate the accusation.

Elizabeth needed to know if a foreign power interfered with the election. Her opponent at the time had been huge on anti-Iranian sentiment and that could be why they hacked him. They probably thought they were helping themselves by making sure someone like Elizabeth was elected. Elizabeth had been the Secretary of the United States when she created the Iranian Agreement and she’s proven that she wants a cordial relationship with them. The Iranians wanting her as President would have saved them from the bigot that was Senator Beauregard Miller. So, no one could really blame them if that’s what they did.

If they did it! The investigation into the Iranians was necessary and Elizabeth revealing what was happening to the world was principled. She could have withheld the information. She didn’t because she thought the American people deserved to know and yet she also created a firestorm at the same time. Elizabeth created a scandal she didn’t have to. She was accused of collusion with the Iranians and she was called an illegitimate President. And the Senators and Congressmen and women that didn’t like her from before, were now the ones leading the charge about how she should be investigated.

All of her enemies were using this scandal as a mark against her. There was nothing Elizabeth could have said or done that would have changed their minds and so Mike B. was especially upset. He thought Elizabeth made the wrong. He also didn’t like how it was suddenly his job to fix it and that was just one more reason why he didn’t want to be her Chief of Staff. Mike wanted an advisory role. He didn’t want the stress of the other job and he was still complaining about Jay because Jay quit in order to be with his family more.

Mike also said he wouldn’t be great at the job. He thought it was too much for him because he didn’t like to be under such scrutiny and what he wasn’t seeing as how well he had taken to being Chief of Staff. Mike was great at barking orders. He kept everyone in line and was a great help to the President. Elizabeth had needed him when she was running and she needed him to help her deal with a guy like Miller. Miller was a vulgar man. He and his cohorts in the senate were horrible people. They practically created the anti-Iranian movement. They were so against it that Miller was going to stall Elizabeth’s legislation if she didn’t go to him and make concessions.

Elizabeth had to promise to be his best friend. They were going to cordial in front of the cameras and she was going to appear as if she turned to him for help in her hour of need. It was all going to be a lie of course, but the American people didn’t need to know that. Elizabeth also didn’t want to push her friend into something if he really didn’t want to do it and so she finally gave Mike the position he wanted. He was back to being her personal advisor. Mike even had to give up the office when Elizabeth roped Russell Jackson into being her temporary Chief of Staff and that meant she was still looking for someone to permanently fill in the spot.

Elizabeth likes to take her time about these things. She picked her old frenemy Senator Carlos Morejon as her Vice President and she brought both Daisy and Blake with her into her presidency. And unfortunately, Elizabeth may have doomed them all because the Senate is subpoenaing them in their investigation into this hacking.

And it doesn’t look good for anyone.