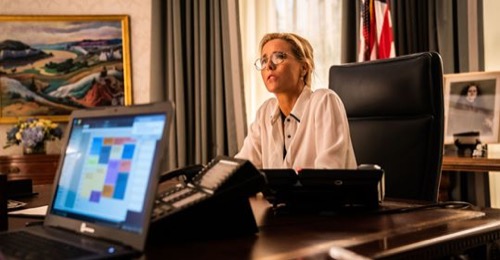 Also, Mike B. is questioned by the Senate Intelligence Committee as part of the investigation into whether the McCord campaign conspired with Iran to steal the election.”

Daisy addresses the press at the White House, briefing them on the president. She shares that Liz is cooperating with the investigation into her win and Iran’s hacking involvement. Daisy is also asked about the low poll numbers for Liz. She sidesteps. Meanwhile, Henry and Liz are in the Oval trying to eat healthily.

Liz is scheduled to throw the first pitch at the Mets game. She addresses the media about throwing from the mound. She doesn’t tell them she is nervous she may not make the distance. She addresses her gas tax, telling them how Henry and she checked the pressure in their tires regularly before leaving with her team.

In the car a short time later, Daisy tells her how a news article called her out of touch.

Mike sits in the inquiry into Liz and her election. He describes a day when they found a dying bird on the campaign trail. She made them bury it.

Stevie tells Blake about her failed to date. He tells her she needs to have more fun. The two flirt back and forth.

Mike continues to tell the story on the campaign trail. Liz spent most of the days and nights tired and sleeping on the bus in better-shaking hands.

On one stop, Liz is called a communist. Mike wants to leave the rally but she doesn’t. Mike heads to the bathroom and finds a senator dead in the bathroom. Mike tries to figure out what to do. If he tells Liz she will want to stay and get involved. Blake gets her on the bus and whisks her away. Before they leave, Mike calls 911 from a payphone. This makes him look terrible in the inquiry.

Liz wakes from a bad dream during which she hit Mr. Met with the ball. She goes to practice in the hall, throwing on balls at a sheet. Henry wakes. He tells her about how Dmitri called him asking to contact Stevie. Liz is thrilled. It is all so romantic.

Liz signs an agreement between nations the next day before they head to the stadium to throw the first pitch. Stevie and Henry go with her. Before she heads out the field she has a change of heart about the gas tax. Russell tells her they will talk about it later. Liz takes the field and nails her pitch. On the sidelines, Henry tells Russell to back off a little and let Liz lead. He shouldn’t second guess her. Russell tells him about the threat reports he gets, how hard the press goes at her all because she is the first woman president. Henry thinks they need to take a breath and really let her be, America chose her after all.

The next morning, Liz tells Blake, Daisy, and Russell about how she plans to find another way to deal with the gas tax. Russell isn’t happy but deals with this. He heads to his office and rests after firing his assistants. Nina comes in for his signature and gives him an attitude about firing his assault. He hires her.

Stevie posts about her date on Instagram. Dmitri sees it while he sits at the airport.

Still at the inquiry. Mike tells them how Liz met the next day with a woman who detailed losing her husband and has no money. Liz hugs her. The next day her poll numbers shot up. They move on to the man who died. One of the member’s questions if Mike had anything to do with it. Mike is outraged and ready to go to war.