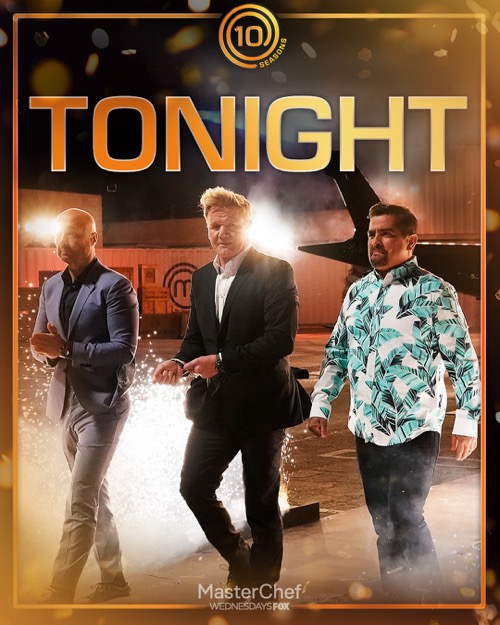 Tonight on FOX Gordon Ramsay’s Masterchef returns with an all-new season on Wednesday, May 29, 2018, season 10 premiere episode 1 called “The Epic 10thSeason Auditions – Part 1,” and we have your weekly Masterchef recap below. On tonight’s Masterchef episode as per the FOX synopsis, “In the Season 10 premiere, 36 home cooks enter the “MasterChef” kitchen in hopes of making it into the Top 20. After a few surprise visitors greet the eager contestants, the cooks learn they will participate in audition rounds, undergoing evaluation from the judges.

Only the best of the best will earn an apron and move forward in the competition. A special twist called the “Judges’ Pass” will prove to be extremely valuable to one lucky individual.”

MasterChef season 10 begins tonight with Chef Gordon Ramsay announcing that he and fellow judges Joe Bastianich and Aaron Sanchez will be doing things completely different, every step of the way. It will be a season full of new challenges and surprise after surprise, with some incredible chefs and guests. For the first time in MasterChef history, the home cooks will travel halfway across the world to the city Gordon Ramsay calls “home”, London. The person who wins it all will walk away with $250,000.

Outside the MasterChef kitchen the promising home cooks, talk about possibly getting the apron; loving to cook and just feeling this is their chance and they have made it. The three chefs arrive by helicopter, with fireworks in the background as everyone cheers for Gordon, Joe, and Aaron. Chef Gordon Ramsay welcomes them to the 10th Anniversary season of MasterChef. He reminds them that their dreams can be changed there, just like Shaun O’Neale (winner of Season 7), Christine Ha (winner of Season 3), and Jennifer Behm (winner of Season 2). Jennifer now has 3 restaurants and Christine just opened her first restaurant and Shaun’s next stop is a residency at the brand new MasterChef Restaurant in Dubai.

Gordon informs the crowd that the three MasterChefs are there to help them tonight, promising huge surprises for all of them, including the largest cash package in MC history and the coolest trophy on the face of the planet, but there is even a bigger prize – the winner will receive amazing training in all 3 of their restaurants. The home cooks are told it all starts now with their signature dishes, wanting to see their personalities on their plate. There are 20 aprons up for grabs, having to cook the dish of their life with the support of their friends; the change is that they need to get approval from all 3 of the judges to move forward.

For the first time ever they have a battle pass, that each one of them can use as a Judge’s save for one talented cook to land themselves an apron; a definite game changer. Shaun explains that one by one they will be called down and have 45 minutes to make their infamous signature dish. Joe, Aaron, and Gordon sit in the MasterChef dining room as Christine, Shaun and Jennifer watch as the cooks make their dishes.

Alan and Sabina are against each other, as the chefs encourage them to do it nice and slow but make sure they get all their ingredients on the plate. Alan made Pan Seared Chicken Adobo while Sabina made Chicken Schnitzel. Gordon reminds them that this year is super competitive; all 3 noting that Sabina perfected the Russian potato salad but there is no seasoning on it. Joe complains that Alan’s dish is not Season 10 worthy; both returning to their families without aprons.

Dorian, 45 is up when Gordon Ramsay comes into the most famous kitchen in the world. He is curious about what is going on; she reveals she is making a drunken chocolate cake. He loves that it will be like “going to heaven.” She feels she has been working towards this her entire life and it is now or never. Dorian says she loves MasterChef because this is the year she chose to change the rest of her life. She shares this dish is her family’s favorite and making it, represents them. All 3 judges taste it, reminding her she needs a yes from all three of them; she feels the cake is going to change her life. Aaron, Joe, and Gordon all give her a yes, giving her the first apron of the night; Gordon tying it for her and reminding her she did a great job! Gordon feels she is one to watch immediately.

The next group of cooks are up, including Nick who is 22 and Liz who just went through a really bad divorce and wants to move on with her new life. Liz made a Mediterranean Red Snapper; it screams Mediterranean and she cooked the fish like a pro. The next cook makes Bibimbap. Joe feels it is smart with an African infusion. Nick made Lamb Ravioli, something Joe expected not to like but it is really good. The cooks return to the kitchen, and all 3 won aprons. Gordon mocks Joe about being nice tonight.

The next group is called down to make their dishes, as Gordon hopes there is more talent out there. The first dish presented is supposed to be Cannoli Siciliani, claiming it to be a sexual dish, but wanted to make it more feminine; Joe joking that it is a Vannoli, feeling it takes like a soggy crossisant. He is told the dish is not good; one by one they return without any aprons; Aaron joking that it is going to be a long season.

Subha brings up his dish, who always loved cooking but couldn’t pursue his passion until now. He wants to prove that you are never too old to chase your dream. He made Chicken and Sausage Jambalaya with Raita on the side. Gordon questions why he would serve a New Orleans dish in an Indian platter; Aaron says he is treading in some chartered waters. After tasting the dish, Gordon wants to find Subha’s mother, who flew in from India. He asks her to taste the dish, she tells him the dish is so special; reminding them that back in India they would not allow men in their kitchen. She feels he deserves an apron and Gordon is going to give him one. Joe, Aaron and Gordon tell him it is a capital “YES!”

The homecooks are working on another round of dishes, one of them named Kenny, 46 gets the crowd dancing and chanting with his family. He feels this is his opportunity to give his family everything and show them exactly what he can do. Joe and Aaron come out, Joe saying there is no mistaking that he is from Boston; Joe calling him the “Italian Stallion.” Kenny is reminded by a family member that he forgot the cheese. Kenny presents his NY Strip Braciole; the love of cooking is from his family. Joe hoping the food is good. Visually, he has it going on. Joe reminds him this is an interpretation of what would be classic Italian. He admits he needed another 2 minutes for the risotto. Gordon, Aaron and Joe give him yeses; Joe welcoming him to MasterChef.

Everyone is impressed as each dish, one after another really is raising the level. The next group is given 45 minutes to create their special dishes. First up is Redfish and Shrimp Couvillion, then a Cold Steak salad. Both are praised for their dishes and told they could be the one to watch; while their wives wait for the results. All have reason to celebrate when both return with aprons.

Sarah, 31 comes to her station, having to wait until now since she has 3 kids under the age of three at home. She just got out of the military, as an Interrogator last year and her husband encouraged her to follow her heart. She felt when she left the military she had no idea what to do, but food was always in her heart and wants to prove to her kids there is never a wrong time to pursue a dream. She made a Herb Crusted Rack of Lamb. The lamb is a little on the rare side, but shows a lot of technical potential, according to Joe but Gordon feels she nailed it. Gordon and Aaron say definitely yes but Joe isn’t sure if it is Season 10 worthy. She emerges into the kitchen with an apron, celebrating with her husband and kids.

Another round of cooks are working hard, as Joe reminds them they need to pick very carefully. Micah, 19 who began cooking at the age of 12. He has no one there to support him, but this is his dream. His dad wanted him to go to school and Micah choosing cooking broke his dad’s heart and told him if he auditions, the locks will be changed when he gets home. He loves his parents but won’t let them hinder his dream.

Micah brings in his dish, saying he left everything behind to be there as this is his passion. He came with no one because his family doesn’t view culinary arts as something worth having. Joe calls him courageous. He made Churros with Aztec chocolate, saying it represents him as it is street food and he is a street kid. Gordon feels they are humble but are they good enough for an apron. Joe says it is a “no” for him, Aaron also says “no”. Gordon feels they are wrong and believes this has passion to turn his life around. Gordon presents Micah with the Judge’s save, revealing he has a second chance to battle it out with whomever Joe and Aaron give their pass to. Gordon tells Micah he has faith in him, hugging him and encourages him. Joe feels Gordon wasted it on him.