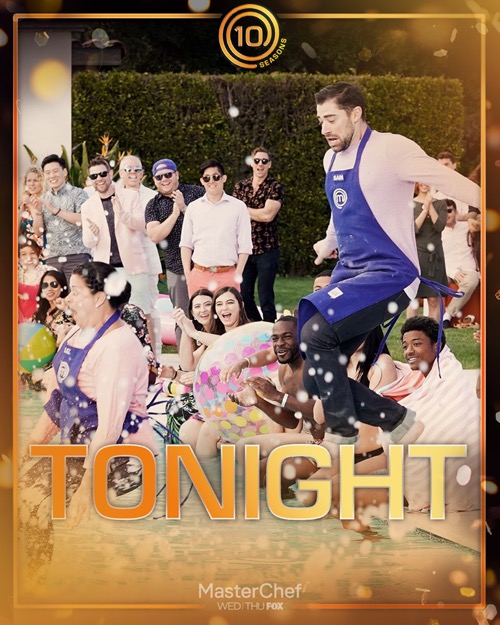 Tonight on FOX Gordon Ramsay’s Masterchef returns with an all-new season on Wednesday, June 19, 2019, season 10 episode 4 called “10thSeason Pool Party,” and we have your weekly Masterchef recap below.

On tonight’s Masterchef episode as per the FOX synopsis, “The Top 18 contestants face their first team challenge in the 10thanniversay-themed pool party; the home cooks dish up party foods for 100 VIP guests, including former contestants and winners.”

The whole thing seemed too good to be true when the Top 18 were invited to a party at a mansion. These contestants didn’t make it this far on their cooking skills alone and so they knew there had to be a catch but, luckily, they didn’t have to wait for long. It was soon revealed to them that the party was their first Team Challenge. The contestants were separated into groups that represented the Red Team and the Blue Team. Their captain was assigned by the judges and in that area, no one needed to worry. Sarah was the captain of the Red Team and she’s shown promise from the beginning. The same could also be said of Noah who was captain of the Blue Team. Both captains have leadership experience and they had to prove tonight that they knew how to carry a team to victory.

The Blue and Red Team were each preparing three separate meals for the guests, but the guests were just anybody. They were previous contestants and winners of MasterChef. They would know good food and right then and there it was their word that mattered. The judges would be taking feedback throughout the party and that’s what will ultimately decide the winner. The winner of the Team Challenge is guaranteed Immunity and so the teams were vying for this position. Everyone on the team knew this and that’s why the captains assigned positions to chefs they felt they could trust. Both Sarah and Noah kept repeating to taste everything and the Blue Team did that, but the Red Team got off on the wrong note when Renee failed to season the burgers. She wanted to season them after she put them together because that’s what she always did back at home.

Only she’s been doing it wrong this whole time. She needed to season the meat before she formed the patties and so she was yelled at. Renee was told to fix her mistake and she did by making sure the seasoning was on the inside, but then she overcorrected. She over-salted the burgers because once the judges tasted them they put that thing back down. Renee also didn’t get cook the right and so Sarah took her off burgers. She moved her to food preparation, but it didn’t resolve everything in the kitchen. There was also Kimberly and Wuta who pulled the skin off the chicken before frying and so, of course, they didn’t get the fry right. They also wasted a lot of chicken doing that and so that plus the burgers put them behind when the guests started showing up.

The Blue Team had its own share of mistakes. Subha was on the grill and yet he failed to notice he hadn’t actually turned it on and so he was quickly taken off of that station. Liz was brought in to replace him and she took made mistakes. She did remember to turn on the grill which was something and so she failed at taking them off of the grill in time. She was burning things and then trying to scrape it off. So she was removed as well. Noah tried putting Evan on the grill and then it was Noah’s fault that they came up raw because he was rushing Evan. Evan said they weren’t ready and he was right. It was like the grill was cursed. Noah eventually took it over himself because he wanted to make sure it came out right.

Subha was still wandering around and acting like it wasn’t a competition, but Ramsay grabbed him and put him on plant-watering duties. Then there was the Red Team whose captain had sort of given up. Sarah even tried ignoring Ramsay because she knew she wasn’t ready to be yelled at. She later stopped hiding behind the grill and tried to take up leadership again, but it still took a while before she came back and only then did her kitchen come into order. The Red Team finished strongly and so it was just unfortunate it took them so long to get it right. It wasn’t even surprising when the Blue Team won their first Team Challenge. Noah yelled a lot and he pushed people, but he never checked out. He held his team together to the end and they all got to celebrate their win at the party.

Apparently, he thinks he was doing a good job when he was getting in everyone’s way.