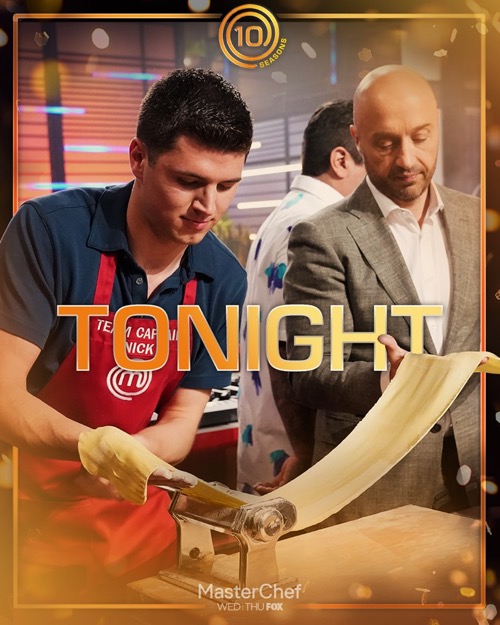 Tonight on FOX Gordon Ramsay’s Masterchef returns with an allnew season on Thursday, July 10, 2019, season 10 episode 8 called “Joe Takes a Risk,” and we have your weekly Masterchef recap below.

On tonight’s Masterchef episode as per the FOX synopsis, “The Top 16 home cooks fight for immunity in an epic team challenge. Split into two teams, the corresponding captains are immersed in Italian cuisine, as they head to Joe Bastianich’s Los Angeles restaurant, Osteria Mozza, to learn how to make a gourmet, authentic three-course Italian meal.

The team captains then make their way back to the “MasterChef” kitchen to teach their respective teams how to execute the same meal for the judges..”

The home-cooks faced another Team Challenge. This time around Michael and Nick were chosen as captains of the Blue and Red Team respectively. These two went to Joe’s signature restaurant in Los Angeles and there they learned how to cook a gourmet three-course meal. It was important that they soak in everything they learned. Nick had to come back and show the Red Team how to cook the three courses and the same went for Michael with the Blue Team. The first course was Ricotta and Egg Raviolo. Notice how it ends in an “o” rather than an “i”. This is because everyone will only be making one piece of ravioli and it was all about technique. The egg had to remain runny or the whole dish was ruined.

The next course is Lamb Rack in a Tahini and Dried Persian Lime Marinade. This dish was all about its seasoning. The chef that showed the captains how to cook this dish also didn’t show them any measurements. She works by memory and that’s how captains will have to do it. They couldn’t just stop with being great cooks. They had to learn how to become instructors as well and they had to lead their teams. As for the final course on the menu, it was Sea Trout with the Umbrian Lentils and Red Cabbage Sottaceto. This was about seasoning and technique. Each dish came with its own difficulties and so the judges were really pushing things this year. They usually waited to throw such a tough challenge at the contestants and so this was a new sign about Season 10 being harder on everyone.

Neither Nick nor Michael could have written everything down. They have to remember the dishes by look as well as taste and so both captains decided not to cook tonight. They need their hands to be free to oversee everything. Michael and Nick also had to begin their captainships by running around because they only have an hour to cook everything and Joe wanted three dishes for every course. Meaning both teams needed to push out nine dishes in all. Joe said that he wanted all the judges to have their own plates and that luxury came at a cost. The captains assigned stations and each station was suddenly in charge of three dishes in under an hour. Some rose to the occasion like they always do and then others floundered – fish pun and all.

Sam was on trout. He was with the Blue Team and Michael entrusted him with the fish, but then he wanted to cook the trout in stainless steel and not cast iron. He believed he knew how to do it and so he didn’t take advice from anyone. Sam ignored his partner and later he ignored his captain. Michael had asked him to use the cast iron. He had taken a look at their stations and had asked Sam to give up the stainless steel. Meanwhile, Sam chose to keep going with the stainless steel. His favorite quote of the day was “I know what I’m doing” and it turns out he did not know what he was doing. He was just an arrogant guy that didn’t want to be told what to do. He would have ignored Michael again when the captain came back around and so Michael asked someone else to use cast iron.

Michael then focused the rest of his time on the pasta station and unfortunately, the butter never browned enough. Even with his hands-on approach. Michael spent so much time helping the pasta station that he ignored the other stations and so the others might not be up to scratch. The Red Team had its own share of mistakes. After time was called, the pasta dishes were judged first and the dish from the Red Team was over-seasoned. It had a little too much nutmeg. Nutmeg is a powerful seasoning and it could be overwhelming if it’s overused. The pasta from the Blue Team was drowning in butter because it never browned right and so there Michael accepted it as his mistake because he was the one that told the ladies to wait when he shouldn’t have.

With the pasta dishes done, the point went to the Red Team. Then there were the lamb dishes and the Blue Team had a rare piece of the lamb because Keturah told her own captain they were fine when he questioned them. Nick should admittedly have been firmer and so here they lost out to the Blue Team. The home-cooks on the Blue Team really did great with their dishes and the taste on the lamb had been perfect. Then came the final dish. The trout was perfect with the Red Team because they had a great set-up and the Blue Team failed because the fishes were all cooked separately if not well. They also failed with the lentils and so that came down to Subha because he said he could cook lentils it in his sleep and apparently he couldn’t.