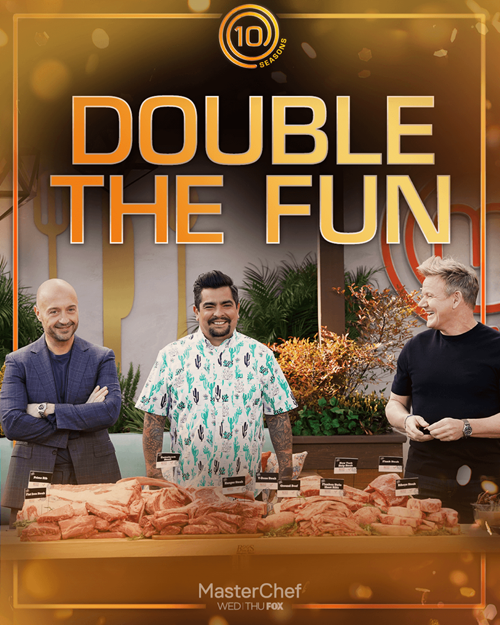 Tonight on FOX Gordon Ramsay’s Masterchef returns with an all-new episode on Thursday, July 18, 2019, season 10 episode 11 called “Backyard BBQ,” and we have your weekly Masterchef recap below.

On tonight’s Masterchef episode as per the FOX synopsis, “The losing team from the previous MASTERCHEF episode, “Gerron’s Wedding,” must now face its dreaded elimination challenge. The home cooks have 60 minutes to present their best beef dish to the judges, in order to stay alive in the competition and for the chance for their dish to be published on the “Beef, It’s What’s for Dinner” website.

But, halfway through the battle, the judges spring yet another challenge on the contestants. See which chefs can handle the challenge and which chef’s journey will be cut short.”

The home cooks go outside on the patio. Since the blue team won the last challenge they are safe from elimination. That means the red team is facing elimination. The red team take off their red aprons and put on the black aprons. Jamie is looking forward to the challenge so he can redeem himself. For the first time in Masterchef history, the home cooks are going to grill. Beef is what’s for dinner, it actually looks like the whole cow! In addition to the beef, they will have access to the summer pantry. The home cook with the best dish today will be featured on the What’s For Dinner website. The clock starts, the home cooks scramble. At the half-hour make Gordon tells the home cooks that the judges want to see a desert. It can be anything and only one portion, but it better be stunning and grilled.

The home cooks are doing great, they don’t seem to be too worried even though another dish was added to their challenge. Twenty minutes to go.

Dorian is up first, she made a T-Bone Steak with Sweet Potato Puree and Grilled Tomatoes. Joe cuts into the steak and it is cooked perfectly. Gordon says it is perfect, but there is a bit too much spice on the puree. For her dessert, she made Brioche French Toast with Grilled Plum & Bourbon Compote and Sweet Cream. Gordon says it is delicious and refined. Joe says she brings home cooking to another level.

Jamie made Tomahawk Steak with Anchovy Butter, Duck Fat Broccolini, Fingerling Potatoes and Spicy Creamed Corn. Joe cuts the steak, it is a perfect medium-rare. Gordon loves it. Aaron says it is really good. For desert: Smoked Peaches and Crème Fraiche. Aaron loves the juiciness of the peaches, and both Joe and Gordon also love it.

Wuta made NY Strip Steak with Red Pepper Chimichurri, Potato Salad, and Grilled Corn. Wuta made a mistake, it is a Hanger Steak and its overcooked. Aaron says the only thing that saved him was the seasoning on the steak. For dessert, he made Grilled Shortbread S’More with Bananas. The judges were not fond of his desert either.

Micah made BBQ Rubbed T-Bone Steak with Lemon Broccolini and Sweet Potato Puree. Gordon says that there is a great char on it, and it is cooked beautifully. Aaron loves the rub, he just wants more of it. For dessert, a Grilled Summer Fruit Skewer with Raspberry Lime Dipping Sauce. Gordon says that it is delicious. Joe says he was the only one that was able to caramelize the fruit on the grill.

Keturah made Steak Frites and Walnut & Apple Salad. She used a Tomahawk, and cut the bone off, the meat looks rare. Gordon says the meat has flavor, the salad is plain. Joe is looking for the hawk in Tomahawk, he is curious why she sliced the meat. Joe says it is like a Tomahawk massacre. For dessert, she made S’More with Vanilla & Maple Glazed Grilled Peach. The judges are not impressed, Gordon says it looked like she panicked, it is like a dish from season 1 of Masterchef Junior.

Noah made Encrusted Bone-In Ribeye with Romesco Sauce, Chimichurri and Brussel Sprout Hash. Gordon says that visually it looks beautiful. Joe cuts into it, it is a medium-well. Gordon says the fragrance of the rub is fabulous, but the meat is overcooked. For dessert he made Grilled Peach Melba with Raspberry Cream. Gordon says the flavor is there, but the peaches are a little tough. Noah is embarrassed.

Time for results. Dorian is safe, Jamie as well, along with Micah, and Sarah who will have her dish featured online.

Wuta, Keturah, and Noah are in the bottom three and across the board, neither one of these excelled. Gordon basically tells Noah the problem with him is that he is too confident.

The person leaving Masterchef is Keturah.