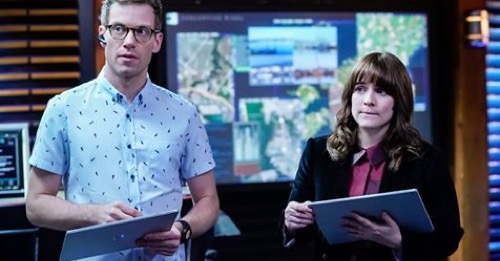 Callen makes Marty drive behind a truck on the highway while he stands on the hood during their mission that has gone sideways. Inside, Sam tries to defuse a bomb while Blye fights a man. Callen makes it onto the side of the vehicle. They get the situation under control and defuse the bomb with one second to go. They all stand together after reflecting on what could have been. They all hope this latest save will get them out of the doghouse.

Back at headquarters, the team gets word that the enemies they just took out have another associate by the name of Jalal that needs to be intercepted. He is a terrorist. The big boss comes in and tells them not to worry. He has some agents on it. They did just work 48 hours straight. He tells them to go home. Later, the agents get Jalal but lose him after a man shows himself in front of their SUV as a set-up to free Jalal.

Marty and Blue are in bed. She is making fun of him. When he sleeps his nose whistles. They talk about how they can’t keep doing this forever. Blye just wants to keep helping people. Marty agrees.

Sam arrives to see Callen who is in a bad mood about his father and all the dead ends as well as their failure to find Hetty. They get a call to head into headquarters. They are briefed on the missing agents and Jalal.

Marty and Blye get briefed from Agent Ross who tells them the guys didn’t leave behind any evidence.

Callen and Hanna head to a local gym to meet a female agent by the name of Fatima who is boxing in the ring. She finishes and updates them on what she knows about Ghulam, Jalal, and the others. She tells them that if Jalal was taken it was because the terrorist group needed him for something.

Fatima, Jones, and Beale update the team on what they know so far. They have a lead. They bring in a woman who works with her husband at the currency exchange. Her husband is missing and didn’t come home last night. She answers what she knows about Jalal. They met him last year. He was a poor student. They hired him at the exchange. But when the money went missing they realized it was Jalal. They fired him days ago.

Blye and Marty talk to a homeless woman who lives near where the agents’ SUV was burned. The homeless woman is scared to talk but shares she actually wrote down the plate of the car that the men left in after setting fire to the SUV. The plates lead them to an address. The team gets there quickly and makes their way inside the warehouse. Ross shoots fast and takes out the only man in there. They discover the makings for assault weapons, computers and more.

After going through their computers, Beale updates the team about an intersection and building of special interest. Hanna and Callen head to the location and tell the theater manager she needs to get everyone out. While helping, the two see Jalal who comes out into the center of the theater with a bomb strapped to him. An explosion happens near them followed by Jalal also exploding. Hanna and Callen are thrown backward and down a set of stairs.

Hanna and Callen come to. They help the people around them. Callen sees a wire on the entrance of the door. Outside, Marty and Blye help people upset about their loved ones inside. Back at headquartered Fatima gets choked up over the bombing. Jones encourages her to work through it.

The bomb squad works to check all of the doors around the theater. Some die inside while others lay injured. Fatima finds a video of the terrorists online wanting there will be more to come.