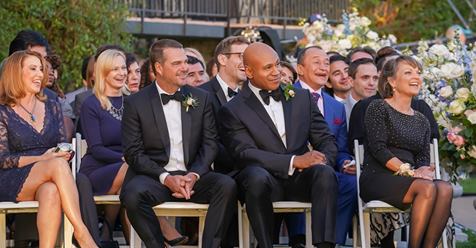 Tonight on CBS NCIS: Los Angeles returns with an all-new Sunday, March 17, 2019, season 10 episode 17 called, “Till Death Do Us Part,” and we have your weekly NCIS: Los Angeles recap below. On tonight’s NCIS Los Angeles season 10 episode 17, as per the CBS synopsis, “After months of planning, the NCIS family celebrates the wedding of Kensi and Deeks. Also, an old acquaintance, Anatoli Kirkin, pays Deeks a surprise visit on his wedding day and he isn’t alone.”

Deeks began having doubts at the worst possible moment. He had doubts about getting married on the morning of his wedding day and so he freaked out. Deeks snuck onto Sam’s boat way too early in the morning and was nearly killed. Sam had thought it was an intruder and attacked without a word of warning, but he stopped just short of maiming the groom and so Deeks was able to answer why he came over. He had doubts about the wedding and he wanted to talk to a man of experience. Sam was married for a long time and he knew how big of a commitment it was. He also knew what to say to get Deeks to calm down. Deeks loves Kensi and he wanted to marry her. She was basically the dream girl he never thought he would ever get a chance with and so all he needed to do was stop doubt that he was worth her.

Kensi chose him. He just needed to remember that to realize that he still wanted to go ahead with the wedding and with that over with he also remembered the box. His fiancée had given him a box a while back and she said that it was what he always wanted. Deeks being the sentimental nerd that he is had wanted to save the box for a special moment. He put off when he first asked Kensi out and when he asked her to marry him, but as he was worried about everything else for the wedding, he thought that if he opened the box now then they could talk about it later after the ceremony. Deeks asked Sam and Callen to help him find the box. They said they could use their resources to try and track it down. And that if anything Eric and Nell were bound to come up with something.

The boys were trying to calm Deeks down about that as well when they received a visitor. Kirkin came to find Deeks because he had wanted to stop the wedding. He told Deeks that he still loves him and that they could be together, but Deeks was happy with Kensi and so Kirkin had to let it go. He said that he wishes the best for Deeks and added that he would no longer interfere before driving away while Deeks had asked the guys to never mention what happened to the others. His mild embarrassment helped him focus on where he could have put the box and he thought he left it at the office. Deeks had gone back there to see if he could find it and he thankfully came across Nell who remembered moving the box to the armory. Deeks was able to get to the box and find out that it held a key for something.

Deeks didn’t know what the key could lead to, but he had been planning on figuring it out when the team was alerted to a problem in the situation room. Eric had eye-gouged the visiting technical operator when Fang Kong Li had tried to take over. The other guy had seen the alert system on the computer and had thought to handle it himself only it was Eric’s computer. He didn’t like other people handling it if he was there and so he fought for control over this one computer. He got into a fight with the other guy and they had needed to be separated by Nell. Nell was asking what the fight was about when Deeks came up behind her and had seen for himself that their alert was for an active kidnapping. He clicked it on to see who was kidnapped and just his luck it was Anatoli Kirkin otherwise known as his least favorite person.

Deeks hadn’t wanted to do anything about the kidnapping itself. He said it was the FBI’s problem and he had a mystery to solve. Deeks found out what the key was for and he had opened the locker at work with it where he was led to another clue. He followed the last clue to where he found a ring. It was Kensi’s father’s ring. Her father wore it throughout her whole childhood and it was one thing that made her remember what it like with her hand in his. He died a long time ago and it still hurts Kensi to know her father won’t be there when she gets married, but by giving his ring to Deeks she wanted him to know that her father would have loved him because of how much she loves him. Deeks had gotten weepy when he read the message and he realized that he was being unfair to Kirkin.

Deeks confessed to both Sam and Callen about Kirkin’s kidnapping. The team knew Kirkin best and they should help with his kidnapping. The guys all called Nell and Eric to see if there was anything they had learned since Deeks last saw them and it turns out there was some information. The technical operators found out that Kirkin had been kidnapped by Paulie Baroni. Baroni was with the Italian mob and so either it was an organized crime family conflict or Kirkin staged his kidnapping with his friend. The guys all believed it was the latter. Sam and Callen still went to go talk to Baroni so that Kirkin would get the message that no one was buying the kidnapping and they ended up getting into a fight with Baroni’s nephew. And so the arrested the lot.

Also, Kirkin later came out of hiding anyways because he wanted to go to the wedding and well his security team had gotten angry at being ditched one time too many. They followed to the wedding and it became a thing. The security team pulled out their guns and NCIS had to fight them off at a wedding with Kensi included. She ripped her wedding dress and traumatized her bridesmaids. Only the team got all the bad guys to save one and the last one had gotten taken down by the one Henrietta Lang. Hetty came back just in time to drive a vehicle through a building and killed the last gunman. She joked about how she couldn’t leave the kids alone for a minute without mayhem ensuing and everybody had just been so happy to see her that they didn’t care what happened to her for those last several months.

Hetty was back and she officiated the wedding of Kensi and Deeks.

The pair didn’t get the wedding they had planned on, but they got the one that fits and it worked out for them.