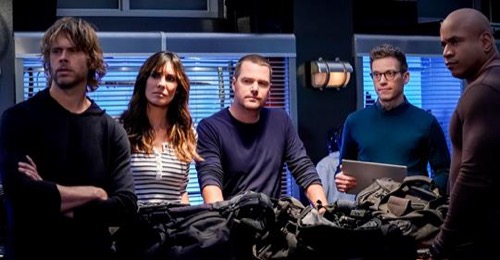 The team was brought in when their old friend Anna Kolchak escaped prison. She escaped with her fellow prisoner Kate Miller and both of them were dangerous. They were killers and that’s why it was shocking that anyone would want to help them, but it did become clear that received outside some kind of outside help. The Marshals suspected Callen. Callen was Anna’s ex-boyfriend and they were living together when he testified against her. He gave evidence that led to the prosecutors charging Anna and she was given seven long years. She killed an unarmed man and that’s what Callen told the prosecutors because he wasn’t going to lie for his girlfriend. Only the U.S.  Marshals believed he might have felt guilty about his choices. They knew that Anna hadn’t been coping well in prison and that she put on a psych hold.

The first thing Callen was asked was if he knew? Did he know that Anna was considered a threat to herself and if so how did it make him feel about his testimony? The U.S Marshalls had to know if Callen regretted what he did and if he tried to fix it. Callen asked where he was between the hours of three and five in the morning because that’s when the women escaped and he told them that he was asleep. He couldn’t prove that he was asleep and so he had to answer the same question over and over again until the Marshals felt sure. They later cleared Callen of any wrongdoing and he wanted to help track down Anna, but the team wasn’t officially on the case. They had been filled in because the Marshals merely wanted to test Callen and once he was in the clear when the team wasn’t really needed.

Only they didn’t want to let things go and they wanted to help because they know that these manhunts mostly end in dead prisoners. Anna may not be their friend anymore, but no one wanted her dead and so they turned to the Special Prosecutor Rogers. Rogers called in a few favors and he made sure that NCIS got to assist. The team was able to find out how this heist unfolded. Anna was in the hospital not that long ago in which everyone believed she had been targeted for being a former ATF agent and it turns out she hadn’t targeted at all. Anna started the fight and afterward, she was moved to a cell by herself. She was too dangerous to stay with someone else and for a while, they weren’t going to assign her a cellmate. This only changed because someone set Kate Miller’s cell on fire. It was believed that her cellmate was the target and so she needed to be moved.

There was just one cell that a vacancy and it was Anna’s. Kate was moved into Anna’s cell and the two became friends. Kate even said as much when she sent a texted someone at the Russian consulate. She used the words “made a new friend” and it seemed like she was telling her partner on the outside that they depend on Anna. Anna’s father was brought in by the Marshals who questioned him about his involvement with the escape and he tried to put them off as long as possible. Arkady shouted how they were never going to catch his daughter and that she could be in South America already. It was physically impossible, but Arkady didn’t let that stop him and he was bragging until it was proven that he spent all night in a poker game. And so Vladlena still has her charms.

Once Arkady was cleared, he said he still wants to help and the Marshals didn’t want his help. They were escorting him out of the building when Arkady grabbed Callen and told him that he doesn’t think this is what seems. Callen agreed with his sentiment. He and his team have been digging through what they knew and it didn’t sound like Anna. They questioned if she could still be working with the ATF and so they reached out to their friends in that department though they were in clear in saying that Anna had been let go. The ATF cut all ties with her a while back and with everything they learned with about the escape it did seem reckless. The team tried a different route and they contacted Kate’s ex. He was a businessman she had an affair with and she turned that around to blackmail him.

Kate threatened to tell his wife, business partners, and his children everything. She told him that she’d keep her silence and in return, all she wanted was information on his business relationships with certain Russian oligarchs. These oligarchs were approved to do business in the states because they were considered harmless, but a lot of money has changed hands and Kate wanted to know everything. Her name also wasn’t Kate. She stole an identity off of a dead body and so that everyone believes that the simple Kate was actually a Russian operative. The Russians clearly wanted her back and they weren’t willing to risk their relationship with the states by telling their neighbors that an operative of theirs was in an American prison. Not when they may need Kate or whoever she is for another mission and so she was broken out.

Anna seemed to be the ones to have to help her and, once Anna wore off her usefulness, “Kate” was supposed to kill her however she couldn’t go through with it. She credited Anna for helping her and she didn’t want to kill a friend. She tried to tell her handler this and he almost killed Anna. It was “Kate” or better yet Katya who stopped him. Katya killed her handler and took over the mission. She even had the men following her and so she was in the charge now. Katya wanted to bring Anna with her when she left the country and the two of them left the handler’s body where it dropped. It was later found by the Marshals who ran the id on the victim and said that he must have been killed for his car. They also said that Anna and her partner were guilty of felony murder and that brought in the death penalty.

Callen said it didn’t sound like Anna and so Sam reminded him of Joelle. She had been a different story, but Callen swore he knew her and he had been wrong. Which could be the case with Anna. Anna and Katya were seen on route to a private airfield and so Sam and Callen cut him off. It was up to Callen to decide if they were going to take the shot and he chose to do it. He, Sam, local police, and everyone shot up the car thereby flipping. But Anna and Katya were alive and before they could be arrested the Russians showed up. They kept firing while the women went to the plane and Callen just managed to break away when he again had his gun trained on Anna. Anna asked him to trust her and she refused to explain herself or why she was leaving her friends under fire. She just boarded the plane and left.

Callen couldn’t kill her and so he didn’t try to stop her, but afterward, they got more information on Katya and it was revealed that she has a close connection to Pavel Volkoff as in Head of Russian Security Services.

There was only one reason why Anna would go after Volkoff.

It seems Anna did all she did because she was trying to find Callen’s father.