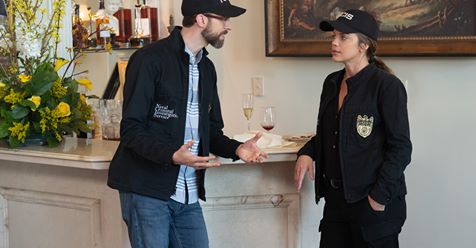 Tonight on CBS NCIS: New Orleans returns with an all-new Tuesday, April 9, 2019, season 5 episode 19 called, “A House Divided,” and we have your NCIS: New Orleans recap below. On tonight’s NCIS: New Orleans episode as per the CBS synopsis, “A Navy lieutenant from a well-connected and affluent family has a fatal fall down a flight of stairs at a charity gala; the team investigates whether his death was an accident or foul play.”

Navy Lt. Wyatt Prescott fell down the stairs at a charity gala. NCIS was brought in to determine if he fell or if he was pushed, but it was their job to solve the matter to the liking of the Prescott family because the family is part of the social elite in New Orleans and they were well-connected. Their friends then called their friends and somehow Pride forced to join the investigation. He wasn’t in charge anymore at NCIS and his job as the Special Agent in Charge meant he didn’t have time to waste. At least not on a case that had four agents working around the clock on it and so pulling him it was just the family manipulating things so that they could have it their way. They didn’t stop with Pride and they went on to make questionable choices.

Like how they brought in a “handler”! This handler was the one that warned NCIS not to ask intrusive questions and she made sure to sit on the family’s interviews with the authorities. She warned the middle brother Caleb Prescott that he was revealing too much when he began explaining how his little brother Wyatt was a good man and was nothing like the eldest Bryce. Bryce wrecks things and Wyatt fixes them. That’s how Caleb described it and so the team was interested in interviewing Bryce. Bryce was arrogant and didn’t seem to care that his little brother was dead. He said that Wyatt saw the world in black and white and that he was quick to find fault in others.

The team later tried asking Mrs. Prescott about her son and if he had enemies, but she denied that he had. Wyatt was sweet according to his mother and he could never stand for anyone to hate him. This could have been said just because a grieving mother didn’t want to think anything bad of her son and so the team tried getting answers on what type of man Wyatt was when they hit the roadblock. This roadblock was once again the family. The family brought in the State Medical Examiner to carry out an autopsy and he quickly stated that it was an accident before handed over the victim body back to the family. The family then had Wyatt cremated and said that was that. They were the ones that told NCIS that the investigation was over.

Only it doesn’t work like that. Pride for one wasn’t going to stand for it and so he had his people continued the investigation. They picked up where they left off and continued looking into Wyatt’s contacts. He was in communication with CGIS Special Agent Michael Martin in the lead up to his death and the team wanted to know why. They looked into Martin and saw that the Coast Guard investigator was circling around Prescott Shipping. He must have found something bad because he was later put on leave and the only Prescott willing to talk with him later ended up dead. The team soon found Martin as his favorite drinking hole and they asked him about what he found. He tried to warn them off at first because he said they were putting their careers in jeopardy, but they didn’t care.

Each member of the team was asked if they wanted to still be a part of this investigation and everyone wanted in. They knew what they were risking when they sought out Martin and they didn’t care. They even told Martin as much and so he opened up to them. He told them that they had been looking into Prescott Shipping because he noticed an alarming pattern. He said that there were ships that didn’t have the correct information and they were all sent to places like purgatory because once they were there that’s usually where it stayed, but then Prescott Shipping was spotted using this ships and they weren’t checked by authorities. Making whatever contraband on them up for grabs for people like the Prescott.

The family or at best someone within the family was using their company to move contraband and the only one Martin knew he could turn to was Wyatt. Both men were servicemen and Martin figured he could talk to him from one navy man to another. He also said that he told Wyatt what he suspected and that Wyatt was supposed to check it for himself. A few days passed by and Martin found himself booted from the Coast Guard on a pretext, but then the next day it had been Wyatt that was killed. Wyatt must have kept perusing the leads and he found out who was behind the contraband. The team couldn’t turn to the family for answers because they were all suspects and so they followed Wyatt’s movements. He went to the shipyard and he was seen in a nasty argument with his brother Bryce.

Wyatt was also definitely murdered because Dr. Wade kept at it on her end and she determined that someone had poisoned him. He was given something that would have made him sleepy and unsteady on his feet, but he couldn’t have taken it himself because he took drugs. His files stated that he refused a pain medication after fracturing his collarbone and so Wyatt was the sort of pain that wouldn’t bother with drugs or alcohol. Which meant whoever drugged him was responsible for his fall down the stairs. Wyatt was at the family home and he could have confronted his killer. The team tried to bring Bryce in and surprisingly no one has heard from him. He was supposed to be overseas on a trip and really the “trip” had been a diversion.

Bryce was in hiding and so the team tried to get his mother to give him up. They approached Angela Prescott with what they had on Bryce and she didn’t believe them, but her middle son Caleb did. Caleb asked them if they were sure that Bryce killed his brother and they said that they could show him what they found as long as he was willing to bring Bryce with him to their office. They tried to entice him and all they did was give him a motive. Caleb turned down their offer and then went to go see Bryce. He was being followed at the time and the team thought they could arrest him once they saw him only they didn’t expect that Caleb was taken things into his own hands. He didn’t drive to his brother’s hiding place to him – he wanted to kill him.

Caleb ran over his brother and kept on driving. He went to his club where he stayed until NCIS came to arrest him and it didn’t matter to him. Caleb freely admitted to murdering Bryce because Bryce killed their brother Wyatt to cover up his smuggling ring. It had been Bryce behind the contraband. He was smuggling counterfeit money and was the family company to do it because he was broke. Bryce had been cut off from his trust fund and everything he had was thanks to his mother. She couldn’t trust him not to spend it all and so she tried to give him an allowance, but Bryce didn’t want to go to her every time he spent money on cars and hotels. He wanted his own money and turned to crime. Its what he’s always done and Caleb said that he cheated on everything.

From girlfriends to tests at school. Bryce never cared about working on something and he chose to cheat his way through life, but Caleb didn’t want him to get away with Wyatt’s death and so he killed him. Except Bryce hadn’t killed Wyatt. He stayed in the west wing of the house and never came to the party. The team eventually found proof of it and so they had to figure out who else had a motive. They had been looking into the company’s finances and they learned with Patton’s help that the company was going broke. It would have gone under in a short amount of time and that’s why Angela was trying to form a merger behind the scenes. She was working with her contacts in DC to merge with another company and keep the family business running.

Angela was also the one that took medication to calm her nerves and after the team found evidence of this – they confronted her. They said that they understood she couldn’t have meant to kill her own son and she confessed that it had all been an accident on her part. She had been confronted by Wyatt who found out about Bryce’s side business and wanted to come forward. Angela couldn’t have that and so she tried to get her son to hold off on making the announcement until the merger went through but he wouldn’t listen. They got into a huge fight about it. Wyatt wanted to do the right thing now rather than later and his mother though drugging him could hold him off. He was supposed to sleep through the party and just be away from people he might tell. And instead, he got agitated with her and tripped on his way down the stairs.

The drugs had been too strong for him and it caused an accident that led to his death, but his mother was the still responsible and so she was arrested for what she did.

Angela killed one of her sons, then one son kills the other, and her last child is going to prison for life.

There was nothing left for her anymore and she accepted her sentence with grace knowing that it would be the end of her company and of the family name.